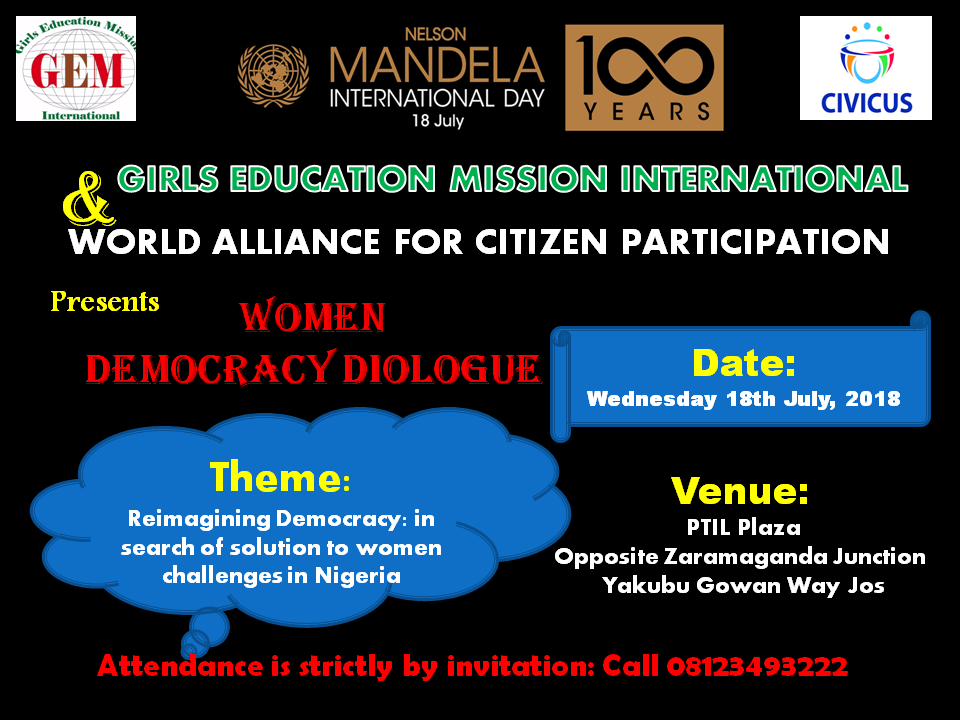 Held on 18 July 2018 in commemoration of Nelson Mandela International Day, this dialogue to reimagine democracy by addressing the challenges faced by women in Nigeria was convened by Girls Education Mission International under the patronage of Young African Leaders Initiative (YALI).

The session focused on the way the quality of democracy in Nigeria has declined over the past few years, which stands as a threat to women’s development in the country. The opening discussion considered the systems, institutions and mechanisms for participation and possible ways for women to get involved and change the currently male-dominated democratic practices with a gender-balanced system of government in which everyone is included regardless of gender and which helps correct the existing inequities of development that disfavour women in Nigeria.

It is therefore obvious that democracy is something that goes far beyond government and voting in elections. Worth of note is also the understanding that democracy begins in families: it starts at home. When human rights and freedoms have a place in the family, this translates to society, the governmental system and politics. Every political actor’s values are shaped by the family where they were raised. 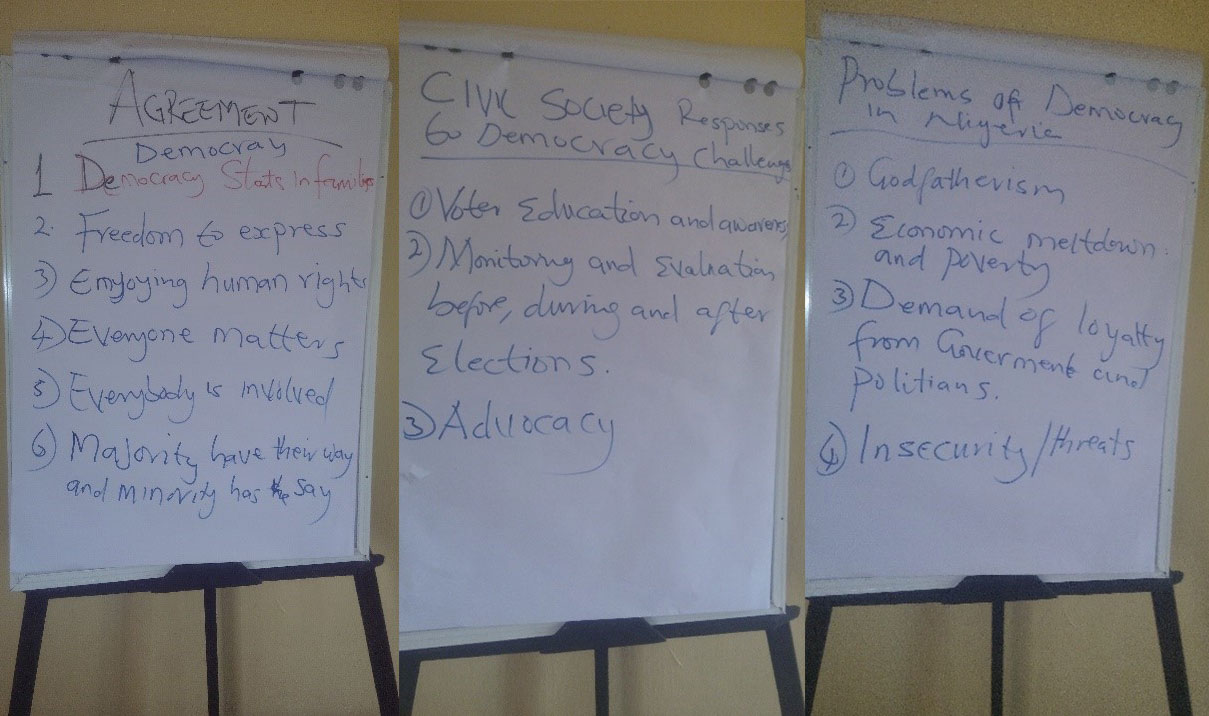 With a strong expression of dissatisfaction with the way democracy is being practised in Nigeria, participants identified a number of current challenges and issues they are experiencing. These include regressions seen in some of the key indicators of democracy such as social injustice, impunity, vote rigging and electoral fraud, godfatherism and challenges posed by insecurity and poverty.

In many contexts, politics is a male-oriented and male-dominated enterprise. Female political participation is not as good as expected. It is becoming increasingly harder in Nigeria for women to participate in decision-making, both at home and in the government. The marginalisation of specific groups such as women and ethnic minorities, and religious manipulation for political gains are currently on the rise.

The imposition of political leaders by members of the elite in the form of a candidate who will be loyal to them and help them achieve their personal interest and agenda stands as the best practice of the day. In elections, candidates are not chosen based on majority votes of any kind; rather they are whoever the party leaders say should run.

The prevailing poverty situation in Nigeria is making it quite easy for the few rich to buy the votes of the poor majority during elections. This in the long run leads to a situation where only the rich have access to political power.

The Independent National Electoral Commission (INEC) is highly unable To guarantee free, fair and credible elections. This is obviously seen in the repeated incidents of vote rigging and other forms of electoral fraud.

The Nigerian government institutions are yet to imbued with the basic principle of a constitutional democracy and the rule of law. The prevailing impunity of government officials and other agencies is becoming comfortably accepted.

Political opposition groups or individuals are being demonised and experience attacks on their freedom of expression.

A democratic government cannot be stable unless it is effective and legitimate, that is, unless it has the respect and support of its citizens. Civil society is both a watchdog and a vital partner in the quest for this kind of positive relationship between a democratic government and its citizens. Civil society organisations (CSOs) are responsible for voter education, monitoring and evaluation before, during and after elections. 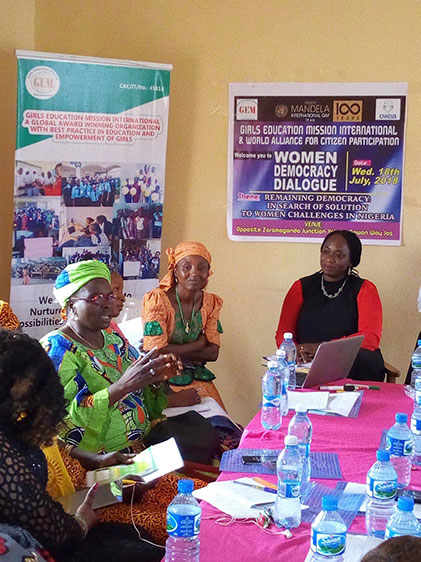 Civil society independence needs to be secured through the following:

As a mechanism with which to evaluate the achievements attained and subsequently work together to ensure a sustainable and gender-balanced democratic system in Nigeria, a communiqué was released following the Democracy Dialogue.

The communiqué summarises key points raised during the event, as follows:

As stated by the communiqué, the collective demands and recommendations made during the dialogue include the following: 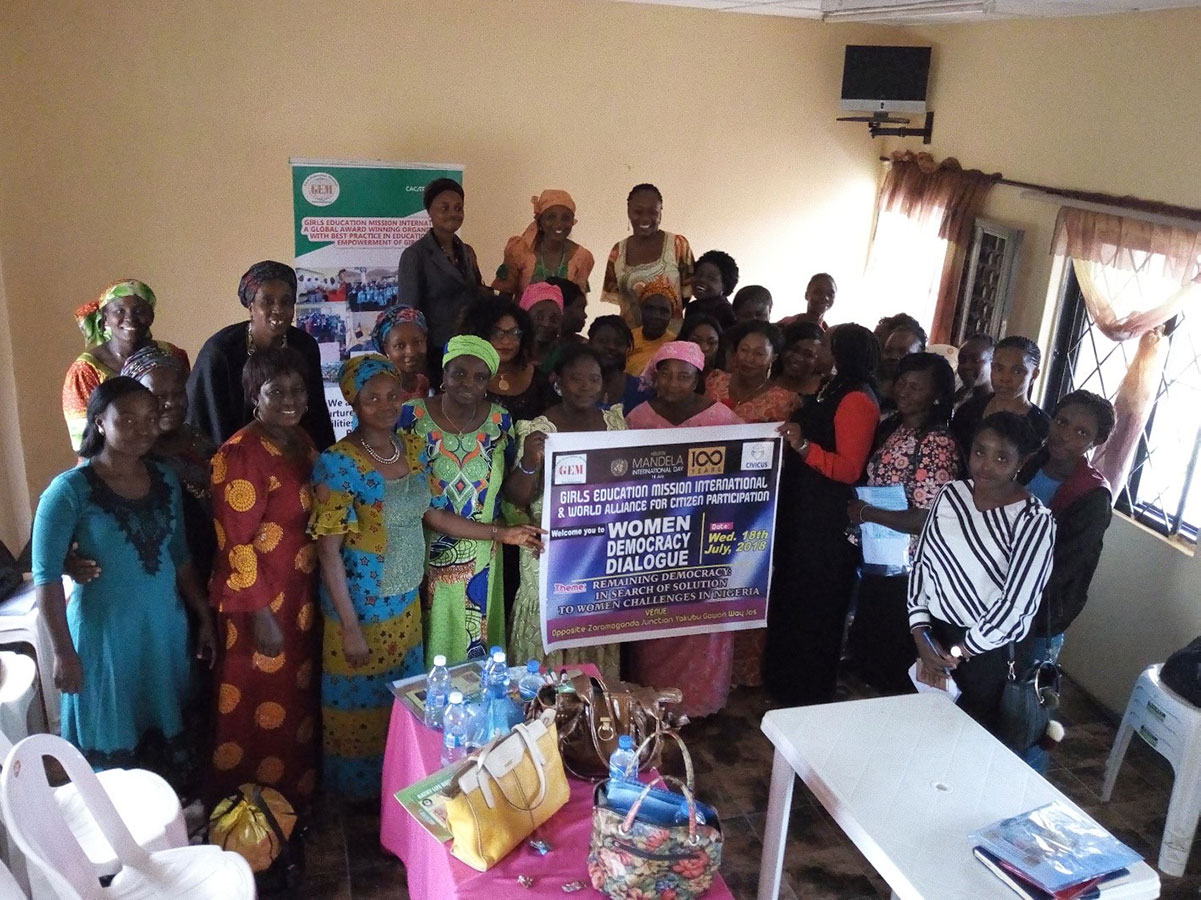