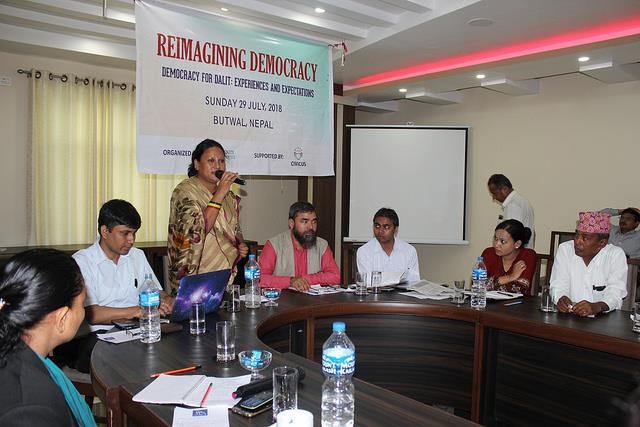 Organised by the Dignity Initiative, this dialogue was held in Butwal, the capital city of Province No 5 of Nepal. A total of 42 participants participated, including members of the provincial parliament, former members of the Constituent Assembly, local politicians, civil society activists, human rights defenders, journalists and members of municipalities.

Entitled “Democracy for Dalit: experiences and expectations”, the programme focused on how one of the most marginalised communities of Nepal, which suffers a number of discriminations based on their caste, perceive democracy and what their expectations are from democracy.

While touching base with the fundamental tenets of democracy, such as participation, freedom of speech and access to justice, this event focused specifically on how participants have experienced the recently held elections at the local, provincial and federal levels and whether or not these elections met their expectations, thereby seeking their ideas and suggestions. To facilitate the discussion, a factsheet for these elections comprising disaggregated data based on caste and ethnicity was presented at the beginning.

Key Issues raised during the session

Nepal introduced democracy for the first time in 1951 but it could not survive even for a decade as then King Mahendra put a ban on political parties and introduced the party-less Panchayat regime in 1961. Democracy was reinstated in 1991. However, soon after Nepal began practising democracy, it came across an armed conflict waged by the Maoists. After a decade-long political turmoil, Nepal finally became a republic as the monarchy was overthrown in 2006. These political developments have been instrumental in shaping the perceptions of democracy among people.

Democracy, in general, is perceived as a system that allows people to enjoy their freedoms -freedom to speech, freedom to organise, freedom to take part in elections and many more. For the Dalits, however, this is not enough. For them democracy is also a system that could ensure their dignity and respect and also bring about changes in traditional power relations, thereby ensuring their equitable share in the direction of state affairs.

Although Nepal has practised democracy for over two-and-a-half decades now and has been a republican democracy for a decade, democratic rights and privileges have not been enjoyed by Dalits as it had been expected. They have not had a meaningful and equitable share in state institutions. The outcome of the elections held in 2017 is proof of the exclusion of Dalits from political representation, which is deemed crucial for policy-making in the changed political scenario. Their representation in the federal and provincial parliaments is just 7.78 per cent and 5.5 per cent, respectively, far lower than their share of the national population (13 per cent).

The major issues raised by participants were the following: