Democratising the policy dialogue on SDG localisation: the experience of the League of Professional Women in Ukraine

Open submission by Dr Olena Lazorenko, President of the League of Professional Women and Senior Researcher at the Institute of Philosophy of the National Academy of Sciences of Ukraine ()

The following case study describes how Ukrainian civil society has engaged in national-level and international-level processes around the Sustainable Development Goals (SDGs). The SDGs provide a new opportunity to model processes of deliberative and participatory democracy, including at the international level, to achieve improved outcomes. It is therefore important to document, and learn from, civil society’s attempts to engage and expand the practices of democracy around the SDGs, and the successes and challenges it encounters in engaging.

My first acquaintance with the SDGs occurred during the preparation for the 60th annual session of the United Nations’ (UN) Commission on the Status of Women (CSW-60), to which our organisation, the League of Professional Women (LPW), had been invited for participation in a side event.

LPW is a Ukrainian non-governmental, not-for-profit organisation that my colleagues from the National Academy of Sciences of Ukraine and myself set up in Kyiv, the Ukrainian capital, in 1997. LPW promotes the active role of women in Ukraine’s economy and society by providing networking opportunities, informational and cultural support and tools for learning and professional development. LPW’s head office is located in Kyiv, but our activities are spread throughout Ukraine. We unite representatives of business, science, education, the mass media and politics. Our core values are lifelong learning, gender equality and social responsibility. Over the past 20 years, we have done advocacy work and provided services related to networking, informational support and professional development. As such, LPW has not only helped professional women but also acted as a catalyst to bring the issue of women’s economic empowerment into the heart of the public debate and the decision-making process in Ukraine. LPW is a member of the UN Global Compact, CIVICUS, She Trades, Women’s Major Group, SME Platform in Ukraine, Feminist Alliance, Public Council on Gender Issues under the Equal Opportunity Caucus of the Parliament of Ukraine, LeanIN and the Ukrainian Part of Civil Society Platform Ukraine-EU. In addition, we participate in the Gender Strategy Platform in Ukraine, WEConnect International and Vital Voices Network, via the individual membership of the LPW president.

A second step on democratic engagement on the SDGs took place between June and September 2016, when national consultations were held, organised by the Ministry of Economic Development and Trade (MEDT) of Ukraine and the United Nations Development Programme (UNDP). These consultations dealt with Ukrainian policy within the framework of the UN 2030 Agenda for Sustainable Development. I took part in them as an LPW expert. Based on the ‘leave no-one behind principle’, the process of localising the SDGs in Ukraine is monitored through a national webpage that includes 86 national development targets and 172 indicators.

Over 800 experts participated in public consultations on the thematic areas covered by various proposals that had been submitted concerning the SDGs for Ukraine. Participants were involved in an open process of establishing national tasks to ensure the objectivity of the assessments. There were two rounds of consultations: one at the national level and another at the regional level. The national level consultation process included representatives of government agencies, UN agencies in Ukraine, international organisations, the business community, CSOs - primarily representing the interests of the most vulnerable groups - and experts. The regional consultations included representatives of the executive, regional state administrations, local governments, communities, international organisations, CSOs and experts. I and two other LPW members were invited to the national level consultation process and, as part of the national level experts’ working groups on SDGs 4, 5 and 8, forwarded our advice to the MEDT. 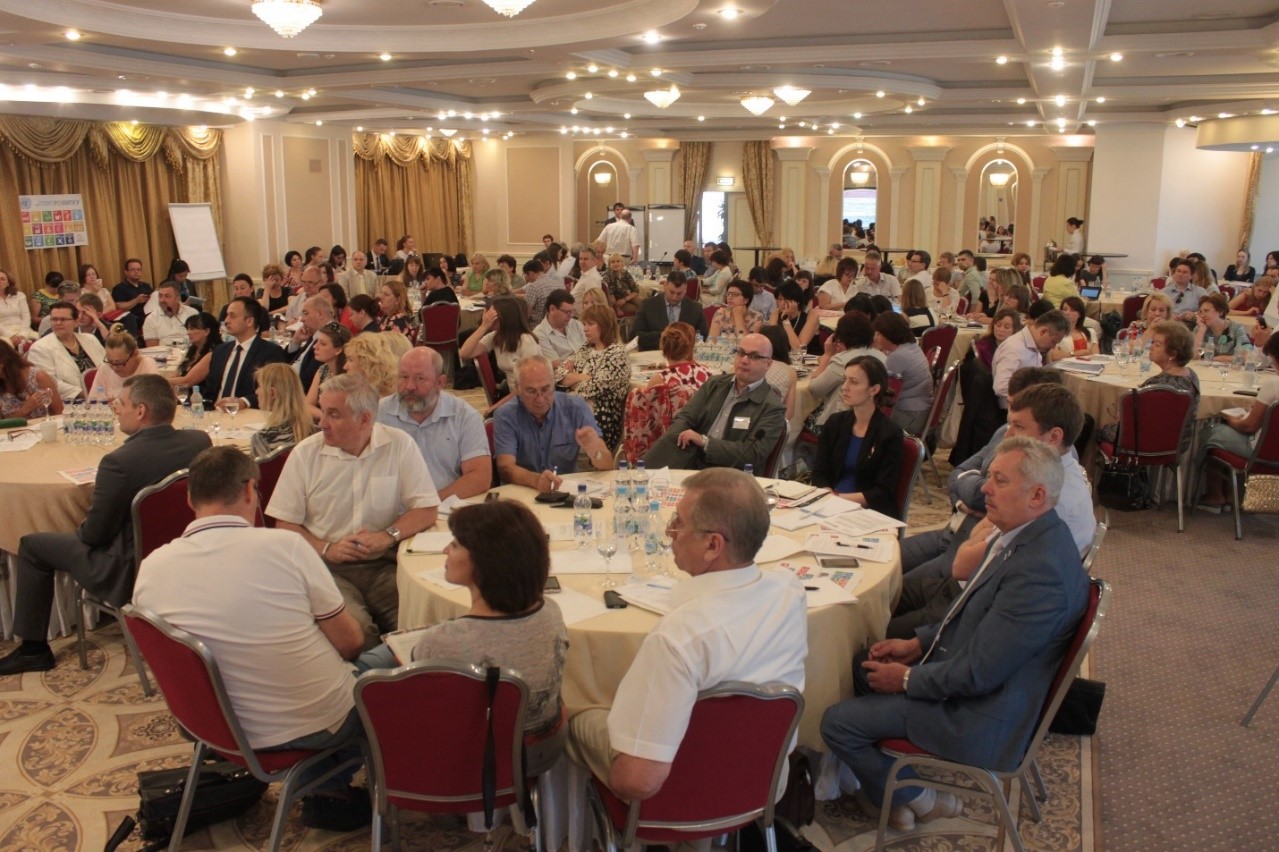 At the experts’ working groups, which took the form of roundtable discussions  led by the MEDT, and in follow-up LPW policy papers, we addressed SDGs 4, 5 and 8. LPW proposed a national SDG 4 with a similar formulation to the global goal, to ‘ensure inclusive and equitable quality education and promote lifelong learning opportunities for all’, with a specific task related to ‘lifelong learning’ and an emphasis on target 4.5, to ‘increase the prevalence of knowledge and skills required for decent jobs and entrepreneurships among the population’. It also added a new formulation for indicator 4.5.1, on the ‘enrolment rate of adults in formal and non-formal, informal adult learning and professional training in Ukraine’.

Regarding SDG 5, to ‘achieve gender equality and empower all women and girls’, we proposed an addition to target 5.6, to ‘expand economic opportunities for women’. Thus, task 5.6.2 included a formulation on women’s economic empowerment and entrepreneurship.

As for SDG 8, to ‘promote sustained, inclusive and sustainable economic growth, full and productive employment, and decent work for all’, we proposed the addition to target 8.6 of a task for developing the creative economy, a proposal that was accepted during the experts’ roundtable consultation. 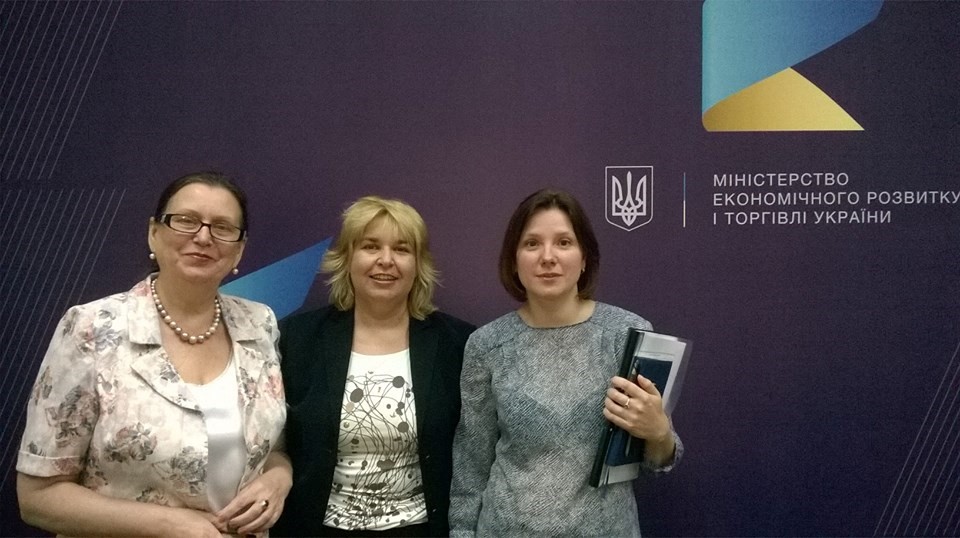 LPW experts with the department head at the Ministry of Economic Development and Trade of Ukraine following roundtable discussions, 2016

In late July 2017, LPW received good news from the MEDT concerning the impact of our advocacy activity. The main part of our proposal had been accepted for inclusion in Ukraine’s 2017 Baseline National Report on the SDGs. A brief document, ‘LPW Advocacy Outcomes on SDGs’, was also prepared and disseminated among international policy-makers, CSOs, leaders, academics, creative workers and donors.

Although the Baseline National Report was approved by the High Level Inter-Ministerial Working Group for the implementation of SDGs in Ukraine, unfortunately to this day no national multi-stakeholder initiative that we know of has been established towards implementing the SDGs in Ukraine, never mind any initiative to include funding for the participation of women’s CSOs.

In September 2017, national experts on the SDGs, including from LPW, took part in the 2017 Global Day of Action for SDGs in Kyiv, as part of the global movement ‘We the People’, marking the second anniversary of the adoption of the SDGs by 193 states, including Ukraine. Within this framework, a global citizen survey - MYWorld2030 – was conducted by the UN and its local partners. including LPW, to help assess public awareness of the SDGs. 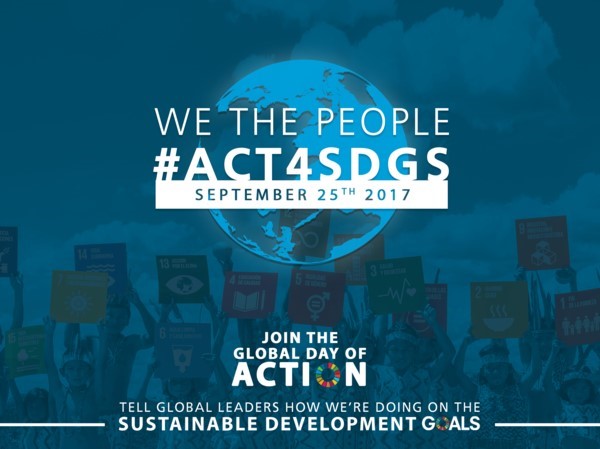 I summarised my advocacy experience and lessons learned from this policy dialogue on the SDGs in a presentation I gave during the Second Global Festival of Action for Sustainable Development, held in Bonn, Germany, in March 2018. The event was attended by 1,500 participants from 100 countries, who discussed key issues in the present economic and social context and the prospects for the realisation of the SDGs at both the global and national levels. 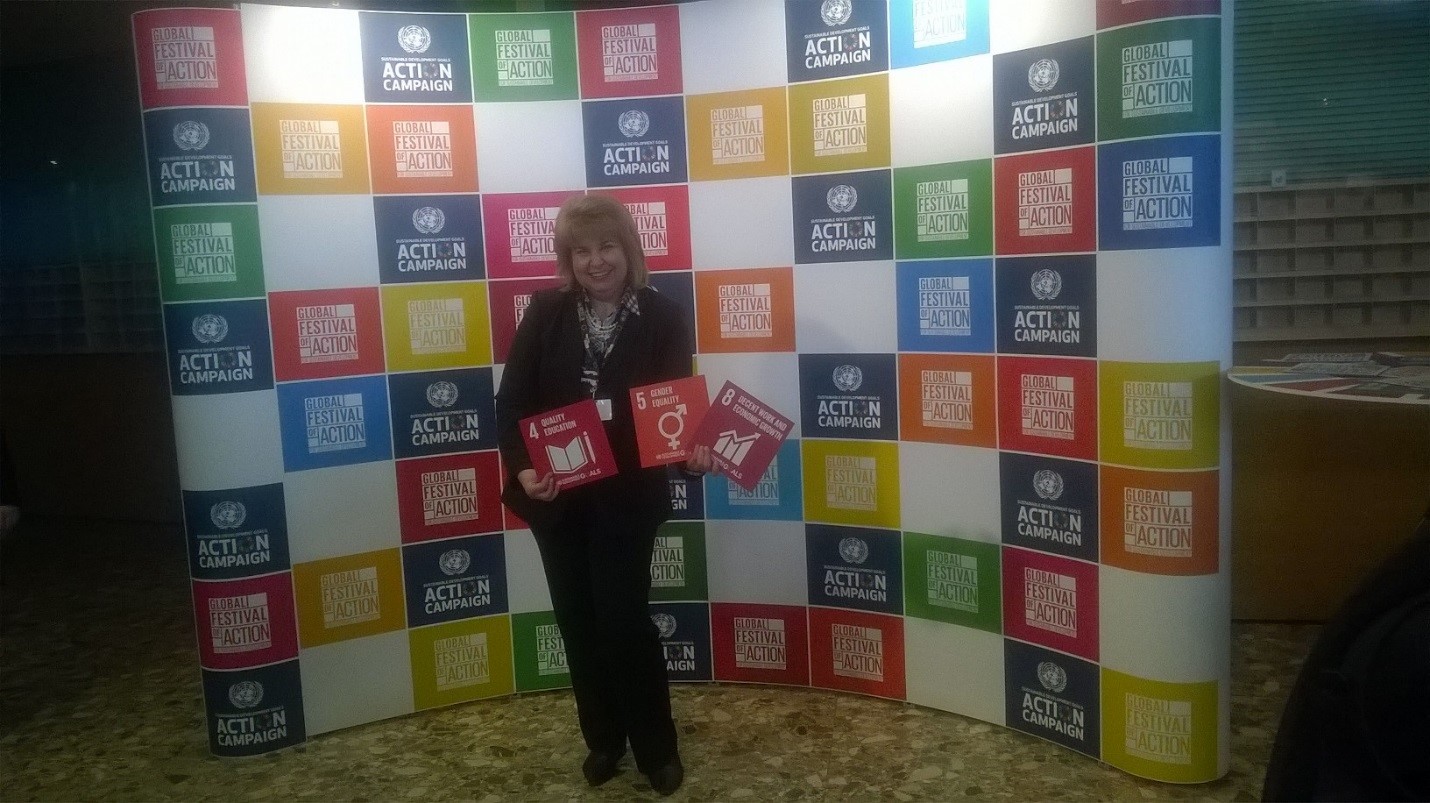 Olena Lazorenko at the Second Global Festival of Action for Sustainable Development in Bonn, Germany, 2018

What lessons did we learn from this advocacy activity? First, that for the effective localisation of the 2030 Agenda for Sustainable Development it is essential to engage with CSOs, academia, local governments, private sector actors and citizens. Second, that authorities need to conduct national consultations on localisation on the basis of the principles of deliberative democracy. In other words, it is important to hold expert roundtables and workshops that are open to dispute and where actual interaction can take place. This process, and by extension any process of deliberative democracy, should encompass five major elements:

Looking forward, LPW hopes that Ukraine will soon join the Voluntary National Review (VNR) process for the SDGs and that our experts will be able to take part in assessments of the progress of SDG national implementation. The VNR provides inputs to the UN High-Level Political Forum (HLPF), which reviews and follows up on progress on the SDGs. The process is to be voluntary, state-led, undertaken by both developed and developing countries, and shall provide a platform for multi-stakeholder partnerships, including through the participation of major groups and other relevant stakeholders.

As part of this, it is important for CSOs to receive support and funding to undertake analytical studies on the implementation of the SDGs. We anticipate using the Ukrainian government’s presentation at the VNR session during the HLPF as an opportunity for mutual peer learning, knowledge exchange and support. We believe these need for this is clear: during the 2018 HLPF, 48 countries presented their VNRs, but as data from the CIVICUS Monitor shows, only nine of these 48 countries have open civic space, while 27 face varying degrees of obstruction or repression of civil society. This hinders the possibility of delivering a ‘whole of society’ approach to the goals.

Additionally, LPW is interested in engaging in the activities of UN Major Groups, an official mechanism allowing broad public participation in decision-making related to international sustainable development. There are currently nine active Major Groups, and LPW joined the Women`s Major Group in June 2018. This is an example of a form of collaboration in which we believe.

Finally, we recommend that Ukrainian authorities develop improved multi-stakeholder partnerships with civil society and other stakeholders, particularly at the national and local levels, as these are key for expanding deliberative and participatory democracy. In this we follow the 2018 study conducted by the CSO Partnership for Development Effectiveness (CPDE). Encompassing the global network’s partners in countries whose governments presented their VNRs at the HLPF in July 2018, the document recommends that governments at all levels improve mechanisms for civil society engagement in SDGs implementation, monitoring and review; make the VNR process accessible, participatory, and transparent; and adopt inclusive processes unlock bottlenecks in the implementation of the SDGs.