CIVICUS speaks about women’s rights and the United Nations (UN) Commission on the Status of Women (CSW) with Terry Ince, founder, and convenor of the CEDAW Committee of Trinidad and Tobago (CCoTT), a civil society organisation (CSO) focused on advocacy, education, and public awareness on and for the Convention for the Elimination of All Forms of Discrimination Against Women (CEDAW).

The CCoTT seeks to ensure the mandates of the CEDAW are upheld and the recommendations of the UN Committee on the Elimination of Discrimination against Women are implemented. To do so, it partners with a wide range of stakeholders in the government, private sector, and civil society. 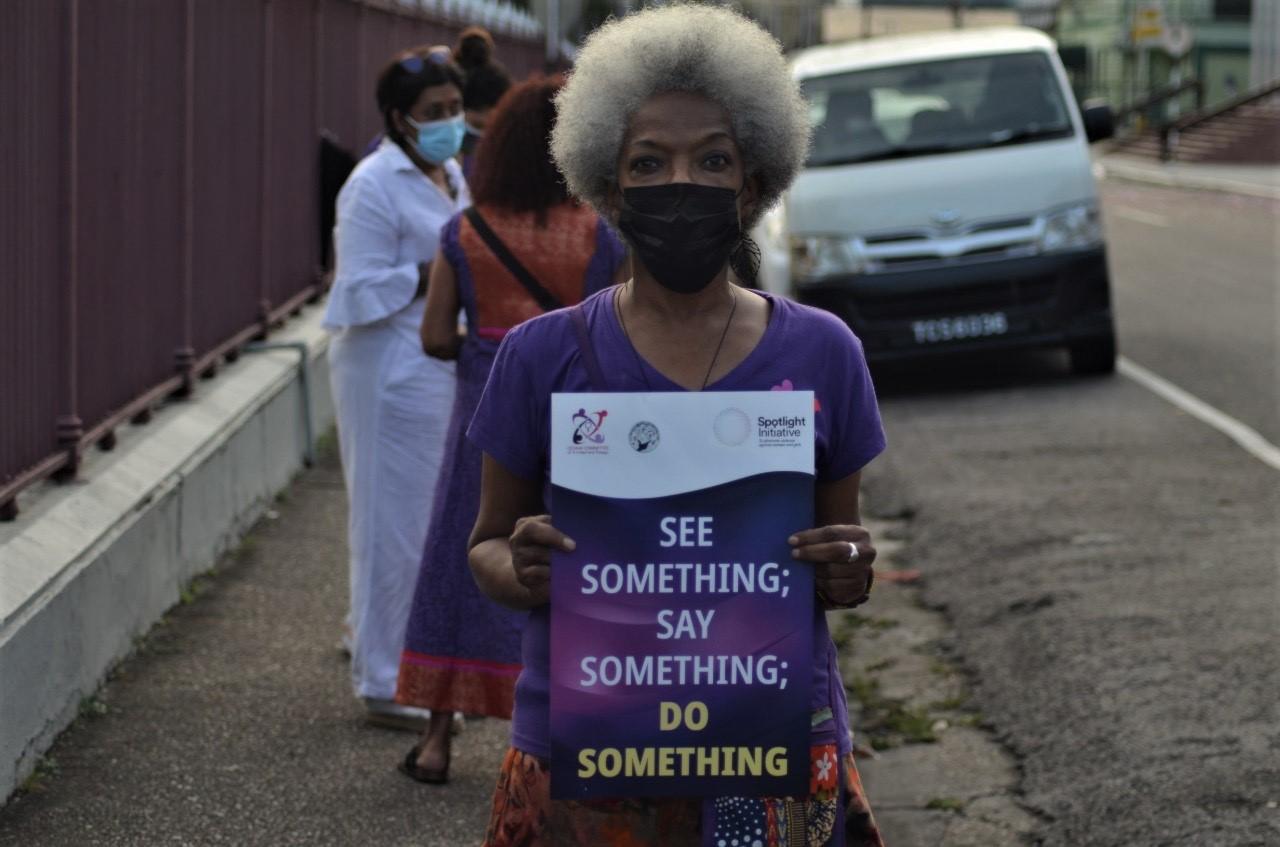 What do you see as the main women’s rights issues in Trinidad and Tobago?

On the surface, you see women in high-profile positions in every area of society in Trinidad and Tobago. However, when you scratch beneath the surface, you realise these women are not the real decision makers.

In 2010 we elected our first woman prime minister. Women make up 38 per cent of the current cabinet. We currently have a woman president for the first time in the history of the country. There are women in the positions of speaker of the House, president of the Senate and Ombudsperson. There are women assisting the Superintendent of Commission of Police. Women lead ministries including trade and industry, planning and development, housing and urban development, public administration, education, gender and child affairs, social development and family services and sports and cultural affairs, and Legal Affairs in the Office of the Attorney General and Legal Affairs. And this is just in the public sector. In politics, you find women on the ballot; political parties actively recruit women to run for political office.

However, women are still not getting enough support. They certainly do not get the required support to run for political office. They may be selected as candidates, but the road to success is often steep and filled with deterrents. Women candidates are often asked to run in districts their parties find particularly difficult to win, so they are almost guaranteed to lose. Women are running but not necessarily winning. To win, they would need financial and coordination support.

On top of this, many of these women are often mothers, wives, care givers, so they have additional duties that nobody is helping them with either. They are playing all these roles simultaneously and expected to be successful at all of them.

Women need more access to political decision-making power. It is not just about being in the room, but at the table, contributing, being listened to, and having their ideas examined, pushed forward and implemented.

It is not enough to have a woman on the ballot. It is also not enough to elect a woman without providing an enabling environment which values her unique perspective on issues.

There continue to be barriers, but I think women can leverage their positions to make headway. I also think that women can and should support other women more within their capacity.

How does the CCoTT work to address these issues?

The CEDAW Committee of Trinidad and Tobago advocates for sustained implementation of CEDAW, a convention that Trinidad and Tobago signed in 1985 and ratified in 1990. More generally, we advocate for women’s development and empowerment. CCoTT’s work is grounded in human rights and CEDAW. We focus on advocacy, public awareness, sensitisation, and education on the Convention, with the overarching mission of achieving the implementation of its mandates and all the recommendations made to the state by CEDAW’s monitoring body.

CEDAW addresses all aspects of women and development, including political engagement, so we work on the understanding that our government’s obligation is to ensure that the appropriate policies and laws are in place for women to have an equal opportunity to access political office. Our citizens, and particularly women, need to know and understand this. And governments must honour its responsibility for having signed this Convention and held accountable. Achieving substantive equality is the goal and CCoTT collaborates with stakeholders to achieve that goal.

So, among other things, we campaign to improve female participation and representation at all levels of governance. We focus on preparing women to claim those spaces and offer training for female candidates. We collaborate – locally, regionally, and globally – with other organisations to bring good global practices to women in Trinidad and Tobago. For example, we have collaborated with the Women’s Human Rights Institute to bring CEDAW training to Trinidad and Tobago.

What issues did you try to bring into the CSW agenda this year?

Not only did we bring the issues I just mentioned, but also climate-related issues – the climate crisis, disasters, and risk mitigation. This was the first time that CSW focused on the nexus between women’s empowerment and climate change, climate justice and disaster management. As a Caribbean country, we are acutely aware of the impacts of climate change and disaster, as we have recently witnessed a volcanic eruption in St Vincent and the Grenadines and floods in Dominica and other countries, which wiped-out whole communities.

In Trinidad and Tobago, we have seen unprecedented levels of flooding. How are women prepared for this? How are women empowered to navigate these kinds of crises when they occur? How are we ensuring that girls’ and women’s needs are addressed appropriately? For example, when disaster hits, how do you ensure their safety in shelters? Do your emergency kits include menstrual products? Who is thinking about these things? These are the kinds of questions we are bringing to the table. Therefore, it is so important that women have a voice when decisions around these issues are made.

We also need to assess how emergencies are managed after the initial cause has been assessed – because the fact that a volcanic eruption has ended, for example, does not mean everything goes back to normal. What happened to the communities most impacted by the eruption? How are they coping? We must rethink the mechanisms we use to ensure people get back on their feet.

What were your expectations, and to what degree were they met?

Fortunately, we were able to have meaningful discussions of all these issues at this year’s CSW. CCoTT hosted a parallel event examining women’s empowerment in times of crises – climate crisis and Covid-19.

Our expectations included gaining access to a wide variety of discussions, hosted by other Caribbean and Latin American countries as well as cross-sectional discussions with countries from other parts of the world – because climate change and climate justice impacts all of us, and we all need to understand this. If something is happening in Latvia, for example, it does not mean it may not happen in Trinidad. We can learn from how the issue is/was addressed in Latvia. Whatever the climate action is, we can use it as a mitigating factor to prevent or better manage adverse effects.

Were you able to participate fully, or did you experience any access issues?

The virtual nature of this year’s CSW made it possible for more people and CSOs to attend. It was different from past editions because there were none of the usual barriers involved in getting visas, traveling to the USA, and gaining access to the UN’s headquarters – which you cannot do if you are not an organisation accredited to the UN Economic and Social Council (ECOSOC).

Those barriers were eliminated this year. From this perspective, virtuality made it much more accessible. CSW66 opened many doors and raised several questions that now must be answered. The UN should assess its own barriers to women’s access, such as the need to have ECOSOC accreditation to get inside UN headquarters during CSW.

Because CSW66 was virtual, participants had the opportunity to hear about different solutions, network with global peers, learn from their stories and share globally what is occurring in Trinidad and Tobago and how we have successfully addressed issues at a local level. In this regard, CSW66 met my expectations.

However, having access to high-level discussions was not easy. Even though they were virtual. Often this required registration which closed at certain number of attendees. Time zones were also a challenge. Events hosted by countries that are 12 hours ahead required some creativity. These were specific challenges of a virtual event, which would normally not be an issue during in-person gathering.

Overall, it was remarkably successful. If it continues to be virtual, we will learn how to navigate the challenges based on this years’ experience.

Do you think that international bodies, and specifically the UN, adequately integrate women into their decision-making processes?

In 2020 the UN acknowledged it was behind in terms of women’s integration in leadership and aggressively implemented changes. However, in 2021, when it had the opportunity, a woman was not elected as its Secretary-General, despite qualified candidates.

With recognition comes responsibility. Global eyes are on the UN, so it needs to set an example throughout its bodies, divisions, and units. However, as I already said, just selecting women is not the answer. We also hear ‘get youth more involved,’ but young people should be prepared, mentored, encouraged, and supported. Similarly, we need to help women along the way and ensure that when they occupy a space where they can contribute, their contributions are valued. The gap is shrinking.

This is a work in progress, and the UN is trying. One way to ensure this happens properly is to involve civil society more – and not just lawyers or PhD holders. Learning does not only occur in the classroom. Application takes place on the ground in communities often led by community organisers or members of organisations. We need the academics collaborating with the community and others to strengthen capacities. Making room for grassroots, women and youth led initiatives. In this regard, there is more work to be done.