SUDAN: ‘The government and the international community must engage more with civil society’ 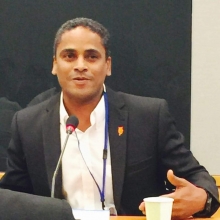 CIVICUS speaks about the prospects for democracy and civilian rule in Sudan with Abdel-Rahman El Mahdi, founder and director of the Sudanese Development Initiative (SUDIA). SUDIA is a civil society organisation (CSO) that works toward stability, development and good governance in Sudan. With 25 years of experience in international development, Abdel-Rahman specialises in organisational management and programming, with a thematic expertise extending to peacebuilding and human security, and civic engagement and democratic transformation.

What was civil society’s reaction when Prime Minister Abdalla Hamdok returned to power in November?

After being ousted by a coup in October 2021, Prime Minister Hamdok managed to return to power in November as a result of a deal he reached with the military, which was signed on 21 November 2021. Reactions to this varied, because Sudanese civil society is very diverse.

Since the December 2018 revolution, Sudanese civil society is in three distinct segments. The first contains what can be called revolutionary civil society movements and groups such as neighbourhood resistance committees, the Sudan Professional Association and other alliances and networks that sprang up during or in the aftermath of the revolution. Second, there is the segment that includes formal state-regulated CSOs, which are usually registered under various laws and have a licence to operate. Third, there are informal or traditional forms of civil society that existed from before independence, including the traditional or native administrative system and tribal leaders, and faith-based groups such as various Sufi groups.

In terms of the size of their constituencies and their representation of the public, the biggest segment is that of informal and traditional forms of civil society, followed by revolutionary civil society movements and groups, with formal and state-regulated CSOs being the smallest.

Each part of civil society has had a different reaction to the Hamdok’s agreement with the military. On one end of the spectrum, traditional or native administrative structures and tribal leaders welcomed the agreement and were even represented at the signing ceremony. At the other, revolutionary civil society movements and groups completely opposed the agreement, which they saw as treason to the values and aspirations of the revolution. As for the third group – that of formal and state-regulated CSOs – reactions were mixed, with a majority seeing the agreement as the most viable way forward and the best possible outcome given the situation.

Divisions and polarisation regarding the issue of military versus civilian rule and governance in the transition period are evident among both citizens and their representative institutions – including civil society and political parties – as well as among democracy movements in Sudan.

How significant is the recent resignation of Prime Minister Hamdok? Has anything changed as a result?

Prime Minister Hamdok’s resignation in early January 2022 is a significant development in the trajectory of Sudan’s transition. Hamdok was the only candidate viewed as acceptable by all the main parties that have shaped the transitional period over the past two years, namely the military, the Forces of Freedom and Change - a political coalition made up of civilian, political and armed groups and signatories to the constitutional declaration of 2019 -, revolutionary groups and the international community. His departure has only complicated the political crisis, because now agreement needs to be reached not just on how to proceed with the governance of the transitional period moving forward, but also on who will lead and represent the civilian element in future governance arrangements – and someone needs to be identified who might be acceptable to all parties involved.

Representatives of the international community, the European Union and the Troika (Norway, the UK and the USA) issued a statement on 4 January 2022 in which they warned against any unilateral move by the military to appoint a new prime minister and called for a Sudanese-led and all-inclusive process to address this and other transitional issues. Meanwhile the situation on the ground continues to worsen, with protests in the capital, Khartoum, and in other cities continuing unabated.

How has civil society organised since the coup?

Organising and responses to the military takeover of 25 October differ from one kind of civil society group to the other. Revolutionary civil society movements and groups, along with some political parties, have been organising mass protests in Khartoum and other cities and states to express their rejection of the 21 November political agreement and call for a civilian leadership for the transitional period.

Beyond welcoming the agreement and military takeover, traditional native administrative structures and tribal leaders have thus far been absent from the scene, taking no visible actions or positions. Meanwhile, formal, state-regulated CSOs have been slow to mobilise a coordinated response but are gravitating towards facilitating dialogue between stakeholders and are beginning to take concrete actions towards that end.

What factors led to the coup and what needs to happen for Sudan to get on the path to democracy?

Several factors led to the coup and military takeover on 25 October 2021, but the most important in my opinion was the lack of a robust dispute resolution mechanism that should have been agreed to and put in place by the key parties leading the transitional period. Such a mechanism would have helped resolve differences among civilian elements and between the civilian and military elements of the transition.

The transitional constitutional decree was a rushed fix to a complex and rapidly deteriorating situation and has many shortcomings, such as vague language allowing for different interpretations. The political milestones and issues to be tackled during the transitional period – including elections, constitution-making processes and to a great extent security sector reform and transitional justice – can be extremely divisive and are likely to be sharply contested by the key parties leading the transition.

To overcome these potentially divisive issues and improve the chances of a successful transition to a democratic, peaceful and just Sudan, it will require that such a dispute resolution mechanism is established in any future arrangement put in place to govern the remaining period of the transition.

What role are international institutions playing, and what should they be doing?

The role of international institutions, including the United Nations (UN) and African regional institutions, has been one of damage control rather than damage prevention. The United Nations Integrated Transition Assistance Mission in Sudan (UNITAMS) was deployed to Sudan in 2020 but throughout the months prior to the coup and the escalating tensions and differences between the parties leading the transitional period it remained totally absent. Its mediation role only materialised at a later stage, following the unfortunate events of 25 October and after the axe had already fallen, so to speak.

Regional institutions such as the African Union and the Arab League have played a marginal role, with the former only issuing statements threatening suspension of Sudan’s membership, and the latter sending a delegation to help with negotiations in the wake of the coup.

More recently, on 8 January 2022, UNITAMS issued a statement announcing it was ‘formally launching a UN-facilitated intra-Sudanese political process which is aimed at supporting Sudanese stakeholders in agreeing on a way out of the current political crisis and agree on a sustainable path forward towards democracy and peace’.

While this step by UNITAMS is to be applauded, it is important for UNITAMS as well as the international community supporting UNITAMS to consider carefully the details of the process. Rather than taking a head-on approach or focusing on a single objective of just simply resolving the current political crisis, the process should include embedded elements that ensure ownership and transparency and help build visions for common ground amongst the stakeholders involved, for the transitional period and beyond.

The process should also ensure the elaboration of a dispute resolution mechanism for when differences arise. UNITAMS will have only one shot at this and if it fails, it will lose credibility and the continued presence of the mission in Sudan will come into question.

Moreover, beyond the immediate challenge of surpassing the immediate political crisis, the UN and other international institutions need to step up their act and stay one step ahead of the transition game in Sudan. Transitions in countries such as Sudan, which is emerging from conflict and years of authoritarian rule, require greater agility, heightened levels of coordination and collaboration and more strategic responses on the part of the UN system and international institutions more generally. To achieve this, they need the help of Sudanese civil society, so they will also need to adopt a more structured and strategic approach in engaging with them, instead of the current ad hoc and largely symbolic form of engagement.

Three of the top-most challenges facing Sudanese CSOs are, in order of priority, the restrictive and disabling environment in which they operate, their limited financial viability and access to funding, and their limited organisational capacity. These are interconnected and have a knock-on effect on each other. They have thus far prevented civil society from playing the promising role that is expected of it in the context of the transition.

The 30-plus years of authoritarian rule in Sudan have had a devastating effect on the development of civil society and it will take years to reverse it. Both civil society and those investing in it need to factor this into their expectations and aspirations and adopt both short-term and long-term approaches to improving civil society’s contributions to the calls of the revolution: freedom, peace and justice.

Once the current political crisis is overcome and the path to the democratic transition is resumed, there must be greater investment in and commitment to civil society on the part of both the government and the international community. Support will be needed for efforts to improve civic space and create a more enabling environment for civil society. Support should also be geared towards facilitating dialogue across the various groups that make up the non-political civic scape in Sudan and strengthening their ability to act and speak as one on critical national issues and future challenges.