CAMBODIA: ‘This is a textbook case of organised crime with links to the state’

CIVICUS speaks with Alejandro Gonzalez-Davidson, a Spanish national and co-founder of Mother Nature Cambodia (MNC), a civil society organisation (CSO) that advocates and campaigns locally and internationally for the preservation, promotion and protection of Cambodia’s natural environment. Due to their work, the authorities have systematically intimidated and criminalised MNC activists. Gonzalez-Davidson has been convicted in absentia for his activism and currently faces further charges. 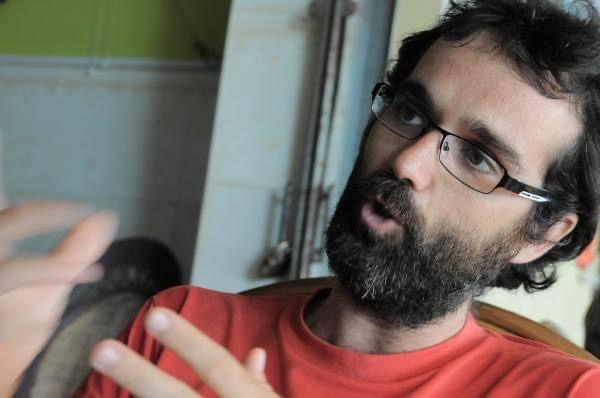 What were the origins of MNC?

We founded MNC in 2013, and the most important factor leading to its founding was that the environment in Cambodia, and especially the forest, was being decimated so fast. Because I could speak Khmer, I was a translator and was reading about it in the news and eventually also seeing it happen.

This senseless destruction was being disguised as development, but in reality it was organised crime sponsored by the state, including the army, the police, politicians at all levels and local authorities. It was painful to see. Local Indigenous people were being cheated and this got me fired up.

I also came to the realisation that civil society, and especially international organisations that were allegedly protecting the environment, were not doing anything that was effective enough. Local groups were not able to do much, and some international groups were doing greenwashing: misleading the public with initiatives that were presented as environmentally friendly or sustainable, but were not addressing the real causes of the problems.

A small group of friends and I started a campaign to stop a senseless hydroelectric dam project, which we knew was never about electricity but about exploiting natural resources and allowing logging and poaching. I was deported a year and a half after we started MNC. Over time, we have had to evolve to try and expose environmental crimes by the state on a large scale.

What have been the main activities and tactics of MNC?

They have changed over time. Back in 2013 to 2015, we could still do community empowerment and hold peaceful protests. We could bring people from cities to remote areas. In 2015, the harassing and jailing of activists started. We realised peaceful protests could not happen anymore because protesters would be criminalised. We continued to do community empowerment until 2017, but then had to stop that too.

One of our biggest tactics is going to a location, recording short videos and presenting them to the public so that Cambodians can understand, click, share and comment. We have received millions of views. We also did shows on Facebook live and lobbied opposition parties in parliament. From 2019 onwards, activists could no longer appear in the videos and we had to blur their faces and distort their voices. Now we can’t even do that because it is too risky.

What is the state of civic space in Cambodia?

The regime of Prime Minister Hun Sen has destroyed democratic institutions, including active and independent civil society, independent media and opposition parties. It has dismantled all these as it realised people were ready and hungry for democracy.

There is a lot for the regime to lose if the status quo changes, mainly because of money. The regime is mostly organised crime. They don’t want pesky independent journalists, activists organising protests or CSOs doing community empowerment. They don’t want to lose power and be held accountable. This is why now there is very little space compared to five years ago, and the situation is still going downhill.

Most civil society groups have retreated and are not pushing the boundaries. They are afraid of their organisation being shut down, funding being cut, or their activists and staff being thrown in jail. Indeed, working in Cambodia is difficult but it’s not acceptable to have a very small number of CSOs and activists speaking up.

What gives me hope is that conversations and engagement among citizens about democracy are still happening, and that repression cannot go on forever.

Why has MNC been criminalised, and what impact has this had and what is impact of the court cases?

Cambodia doesn’t really have any other group like us. We are a civil society group, but we are made up of activists rather than professional staff. Other activists used to do forest patrols in the Prey Lang forest, but the government forced them to stop. There are also Indigenous communities and environmental activists trying to do some work, but what happened to MNC is also a message to them.

In 2015, three MNC activists were charged and subsequently convicted for their activities in a direct-action campaign against companies mining sand in Koh Kong province. In September 2017, two MNC activists were arrested for filming vessels we suspected were illegally exporting dredged sand on behalf of a firm linked to the ruling Cambodian People’s Party. In January 2018, the two activists were fined and sentenced to a year in jail.

In September 2020, three activists affiliated with MNC were arbitrarily detained while planning a peaceful protest as part of a campaign against the planned privatisation and reclamation of Boeung Tamok lake in the capital, Phnom Penh. They were sentenced to 18 months in prison for ‘incitement’.

Most recently, in June 2021, four environmental activists affiliated with MNC were charged for investigating river pollution in the Tonle Sap river in Phnom Penh. They have been charged with ‘plotting’ and ‘insulting the King’. There are currently six MNC activists in detention.

We have been charged with threatening to cause destruction, incitement, violating peoples’ privacy – just for filming at sea – and the latest additions to the list are ‘plotting’ to violently overthrow institutions – just for recording sewage going into the Mekong river – and insulting the King. The government is no longer even pretending that this is about law enforcement and is now just picking crimes to charge us with.

As we become more effective in what we do, the state’s rhetoric against us has become more aggressive. The authorities have vilified us, calling us traitors and terrorists. Repression starts from the very bottom, with the local police, the mayor, the military police and their civilian friends who are in the business of poaching, logging and so on. They follow you, threaten you and even try to bribe you. They also control the media narrative and have trolls on social media. Even if all you do is a media interview, they will threaten you online.

This has created a climate of fear among activists. As in any other dictatorship, Cambodia has always been ruled by fear. This percolates down to young people, who make up the vast majority of our activists. Their families and friends get really worried too. When people feel there is less of a risk in getting involved, the state hits activists and civil society again with more arbitrary and trumped-up charges, as a way to instil further fear in people’s minds.

The impact of the court cases against MNC has been strong. At first we were able to put up with them by diversifying our tactics and putting new strategies in place, but over the last two years and with six people in jail, it’s become more difficult. But this won’t stop our activism. It will not defeat us.

Have you faced threats from private companies?

The line between the private sector and the state is blurred in Cambodia, and in certain cases is just not even there. You don’t have a minister or the army saying, ‘this is my hydroelectric dam’ or ‘we are doing sand mining’, but everyone knows the links are there.

Those representing the state will provide the apparatus and resources to threaten activists and local communities, and businesspeople – who sometimes are their own family members – will give them a percentage of the earnings. For example, sand from mining exported to Singapore – a business worth a few hundred million dollars – was controlled by a few powerful families, including that of the leader of the dictatorship, Hun Sen. This is a textbook case of organised crime with links to the state. And when a journalist, civil society group or local community tries to expose them, they use the weapons of the state to silence, jail, or bribe them.

Why did MNC decide to formally disband?

In 2015 the government passed a repressive NGO law with lots of traps that made it difficult for us to be in compliance. I was also no longer in the country, as I was not allowed to return even though I had been legally charged and convicted there. In 2013, when we registered, there were three of us, plus two nominal members who were Buddhist monks. The other two founders were taken to the Ministry of Interior and told to disband or otherwise go to jail, so they decided to disband.

We also thought it would be better not to be bound by the NGO law. Cambodian people have the right to protect their national resources. According to the Cambodian Constitution and international treaties the state has signed, we are not breaking the law. But we know this will not stop them from jailing us.

What can international community do to support MNC and civil society in Cambodia?

Some things are being done. Whenever there is an arbitrary arrest of activists, there are embassies in the capital, United Nations institutions and some Cambodian CSOs who speak up.

That’s good, but sadly it’s not enough. If you are doing business with Cambodia, such as importing billions of dollars per year worth of garments, you have to do more than just issue statements. You should make a clear connection between the health of democracy in Cambodia and the health of your business relationships. For example, the UK is working on a trade deal with Cambodia, and it must attach to it conditions such as ensuring a free media and halting the arbitrary jailing of activists.

The problem is that some diplomats don’t understand what is going on or don’t care about the human rights situation. Southeast Asian countries should also help each other and speak up on the situation in Cambodia. Not just civil society but members of parliament should call out, send letters to their ambassador and so forth.