COP26: ‘My hope lies in the people coming together to demand justice’ 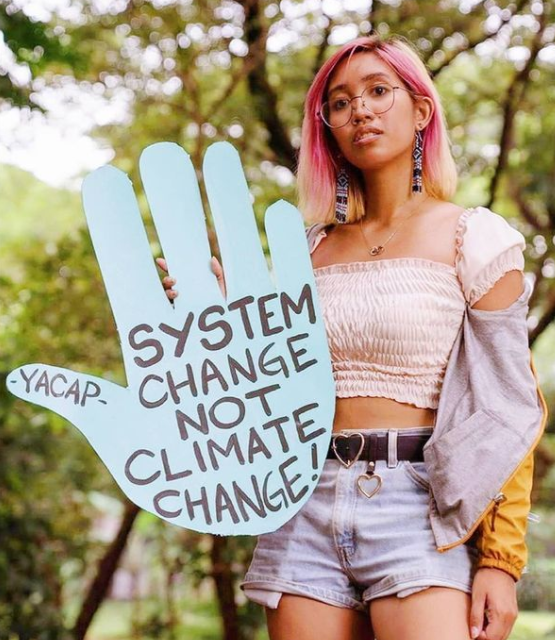 CIVICUS speaks with Mitzi Jonelle Tan, a young climate justice activist based in Metro Manila, Philippines, who organises with Youth Advocates for Climate Action Philippines and is active in Fridays for Future International.

What’s the key climate issue in your community?

The Philippines is plagued by several impacts from climate change, from droughts that are getting longer and warmer to typhoons that are getting more frequent and more intense. Aside from these climate impacts – that we have not been able to adapt to and leave us with no support when it comes to dealing with the loss and damages – we also face numerous environmentally destructive projects, often undertaken by foreign multinational companies, that our government is allowing and even encouraging.

Youth Advocates for Climate Action Philippines, the Fridays for Future of the Philippines, advocates for climate justice and to make sure that voices of people from the most affected communities are heard, amplified and given space. I first became an activist in 2017 after working with Indigenous leaders of the Philippines, which made me understand that they only way to achieve a more just and greener society is through collective action leading to system change.

Yes, just like anyone who speaks up against injustice and inaction, our government through its paid trolls red-tags and terror-tags activists – it basically calls us terrorists for demanding accountability and pushing for change. There is a fear that comes along with being a climate activist in the Philippines, which has been characterised as the most dangerous country in Asia for environmental defenders and activists for eight years in a row. It’s not just the fear of the climate impacts, it’s also the fear of police and state forces coming to get us and making us disappear.

How do you engage with the broader international climate movement?

I organise a lot with the international community, especially through Fridays for Future – MAPA (Most Affected Peoples and Areas), one of the global south groups of Fridays for Future. We do it by having conversations, learning from each other and creating strategies together, all while having fun. It’s important for the global youth movement to connect with one another, unite and show solidarity in order to truly address the global issue of the climate crisis.

What hopes, if any, do you have for COP26 to make progress on your issue, and how useful generally do you find such international processes?

My hope doesn’t lie with the so-called leaders and politicians who have continued business as usual for decades for the profit of the few, usually for the global north. My hope lies in the people: activists and civil society coming together to demand justice and to really expose how this profit-oriented system that brought us to this crisis is not the one that we need to bring us out of it. I think COP26 is a crucial moment and this international process has to be useful because we’ve already had 24 too many. These problems should have been solved at the very first COP, and one way or another we have to make sure that this COP is useful and brings meaningful change, not just more empty promises.

What one change would you like to see – in the world or in your community – to help address the climate crisis?

The one change I ask for is a big one: system change. We need to change our system from one that prioritises the overexploitation of the global south and marginalised peoples for the profit of the global north and the privileged few. The way we view development, it shouldn’t be based on GDP and everlasting growth, but rather on the quality of people’s lives. This is doable – but only if we address the climate crisis and all the other socio-economic injustices at its roots.

Under the Chairmanship of Cambodia in 2022, the Association of Southeast Asian Nations (ASEAN)...