Consolidating democracy in Nigeria: the need to promote electoral integrity

The heat is on. The democratic barometer points to overheat. Reports across Nigeria are of violence, electoral murder, arson and palpable fear. Hate messages are freely packaged and promoted as party manifestoes. Social media is a veritable tool for hate messaging. Tribe, religion and ethnicity have been brought to the fore, all in a bid to sway the electorate and buy their sympathy and their vote. Every state in Nigeria is caught up in the frenzy about the forthcoming 2019 election. But doubts exist in many hearts. Will the election be free and fair? Will the election herald the dissolution of Nigeria?

Nigeria has had 19 years of elected presidents uninterrupted by military coups. Should this be the content and hallmark of our democracy? Should elections not be a time to renew mandates, consolidate our achievements and remove incompetent and ineffective leaders? Elections are part of the democratic process and not an end in themselves. Elections are opportunities to evaluate the performance of those in custody of our mandates against their promises and governance deliverables. The democratic process that elections provide brings to the fore the relevance of participatory democracy and inclusive governance. It is a period where office seekers are at the mercy of the electorate.

According to former UN General Secretary Kofi Annan, democracy is a universal value and aspiration, unbound by region, ethnicity, religion or culture. Elections provide citizens with a say in the decisions that affect their everyday lives and provide governments with a legitimate authority to govern. However, only when elections are free, fair and credible can they help promote democracy, human rights and security. When elections are fraudulent and subject to vote rigging, they have the potential to trigger political instability and violence.

Thus, for Nigerian democracy to fulfil its potential, the integrity of the forthcoming elections is crucial. It is in order to provide electoral integrity that the Independent National Electoral Commission (INEC) introduced the card reader machine for voters’ accreditation. It is also in the same vein that many of the Resident Electoral Commissioners (RECs) of Nigeria’s states are enlisting the support of civil society organisations (CSOs) to ensure civic education and participatory electoral processes. Many CSOs are innovating to widen the process and ensure grassroots sensitisation. Neighbourhood Environment Watch (NEW) Foundation, with the support of the media in Ebonyi State, has created ‘Democracy Clinic’, a platform for civic education and a means of gauging the democratic barometer, and with other CSOs has been working with the Ebonyi REC to ensure that the state has a violence-free and transparent election. It should be noted that Ebonyi Sate is one of flash points for electoral violence in Nigeria.

Unfortunately, our electoral integrity is threatened by many factors. One such is voter apathy and lack of trust in the ability of electoral officials not to be biased. We see a decline in citizen trust in our democratic institutions and processes, mainly due to reasons relating to poor and non-inclusive governance and electoral corruption. Again the independence of electoral institutions is in doubt, as many believe that whoever pays the piper dictates the tune.

While integrity in elections is crucial, there are other factors that will influence the outcome of elections and thereby contribute to building citizens’ trust in democracy.

The rule of law needs to be strengthened in order to protect the rights of voters and candidates. As noted by Kofi Annan, election integrity is crucial, but the establishment of the rule of law precedes that.

Elections should be managed by professional and independent national bodies in order to maintain credibility and avoid the kind of disaster that resulted in 2011 post-election violence in Nigeria.

We should advocate for the avoidance of ‘winner-takes-all’ politics by encouraging the building of institutions and processes that are vital for multi-party competition and division of power.

Furthermore, we should remove the barriers that prevent free and consent-based voting and promote the inclusion of women, minorities and other marginalised groups. There is a need to work towards a time when those we elect as our leaders are voted into positions of trust based not on the colours of their skin, the religion they profess or the tribe they come from, but on their antecedents, their track records of integrity, and their passion to be judged by history as men and women who have made their marks on the sand of history.

There is the need to promote the unity of Nigeria and sensitise the electorate to vote for those who have the passion to make positive impact, herald sustainable development and fight corruption – the cankerworm that has defied all cures in Nigeria.

Above all, civil society should be supported to advocate and track the flow of unregulated money in politics, which undermines voters’ faith in elections and ultimately in democracy, and instead breeds fear that wealth buys political power and influence.

It is necessary to address the abovementioned challenges as they potentially have grave consequences for the consolidation of democracy in Nigeria if not addressed properly and in time.

The role of civil society organisations in democratic consolidation in Nigeria

The abuse of office, executive lawlessness and the helplessness of the electorate in tackling the menace of electoral corruption should activate a civil society that is determined to check the erosion of human rights, freedom and civic values. CSOs, as an integral part of society and the electorate, should be fired by intense restlessness, demanding participatory democracy, transparency and electoral integrity. Corruption is corruption no matter where it takes place.

CSOs, especially those working on good governance and anti-corruption, should get involved in the activities of their communities and work to ensure that we have credible elections, and an electorate that is well informed and not prone to conscience buying through material inducements. It is not in doubt that there can be no meaningful democracy without the active involvement of the people. Good governance is all about the level of people’s involvement in governance. But often the peoples’ wishes are subverted through political corruption, such that democracy in Nigeria, instead of promoting the welfare of the people, becomes a burden under which only those that have political clout survive. Nigeria’s underdevelopment as a nation despite its abundant resources is attributable to flawed electoral processes. There is an intimate link between the subversion of the electoral process and electoral fraud and poor governance.

With a partnership existing between the Independent Corrupt Practices and Other Related Offences Commission (ICPC) and CSOs under the National Anti-Corruption Coalition (NACC), most of its members have been in the vanguard of consolidating true democracy through diverse programmes such as voter education, election observation, campaign finance monitoring, election tribunal monitoring, electoral reform advocacy, conflict mitigation, access to justice, public interest litigation, budget tracking, constituency outreach and research and documentation in thematic areas of democracy and governance. These initiatives have made a good impact on Nigeria’s nascent democracy, as organisations and governments assess the democratic temperature of the country through the barometer of CSOs. 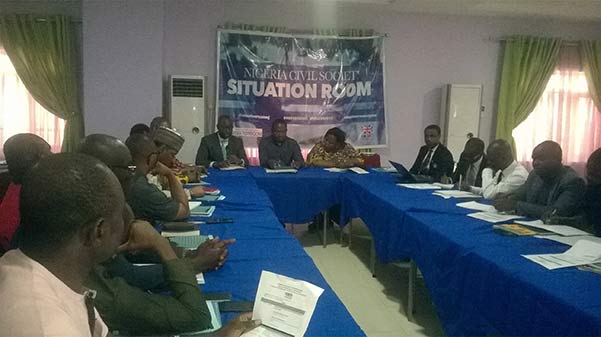 The ‘Not-Too-Young-to-Run’ Act recently assented to by President Muhammed Buhari is a welcome development. The act will remove age barriers to seeking elective positions by Nigeria’s virile and creative young people. Young people need to be united and take up the mantle of leadership and rescue Nigeria from the seeming precipice of an implosion orchestrated by the old order of politicians.

The 2019 election, if not well managed, portends to be a turbulent one with regard to upholding democratic values in Nigeria. Elections with integrity are not the sole instigator of citizens’ trust in democracy, but they remain a crucial stepping stone for our development and unity as a people. Therefore, the Nigerian government, public office seekers and the people must make a commitment to make the electoral process credible and fair, without which efforts to consolidate democracy in Nigeria will continue to remain a pipe dream.

Civil society, especially those engaged in democratic advocacy, should be supported and empowered to conduct civic education, build confidence among the electorate and monitor electoral processes to ensure transparency and accountability.