Civic freedoms in Palestine continue to deteriorate with an escalation of attacks on civil society organisations, journalists and Human Rights Defenders (HRDs) by the Israeli Occupying Forces (IOF).

Ahead of the United Nations Human Rights Council debate on Item 7, “Human rights situation in Palestine and other occupied Arab territories, a new research brief by CIVICUS provides an overview of recent civic space restrictions in the Occupied Palestinian Territory (OPT) perpetrated by both IOF and OPT authorities. 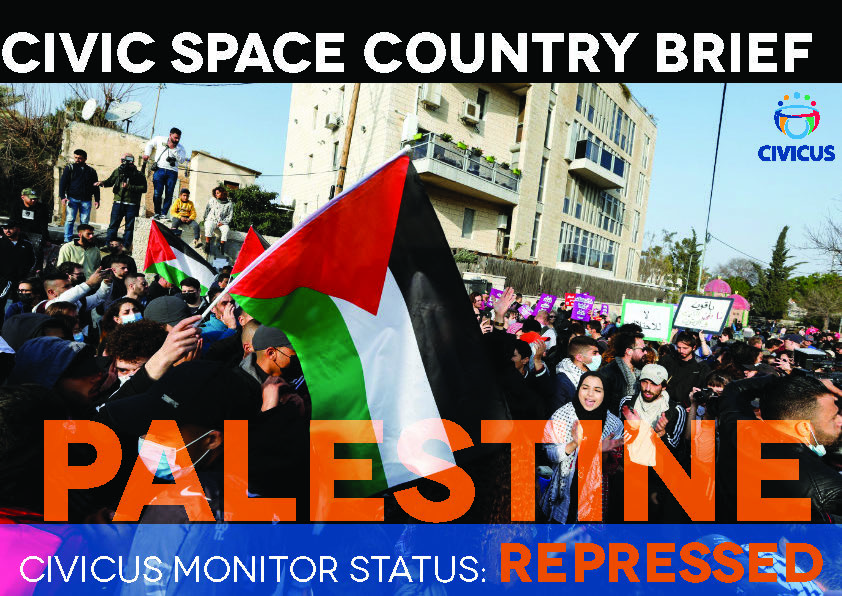 Violations documented as a result of Israel’s institutionalised regime of apartheid include the harassment and killing of journalists, protesters and HRDs, censoring Palestinian voices online and offline, and the forcible closure of civil society organisations (CSOs).

Israel’s targeting of CSOs escalated in 2021 after six leading Palestinian human rights organisations were designated as “terrorist organisations” under the Counter-Terrorism Law. On 18 August 2022, the IOF forcefully entered, raided, and sealed the entries to the offices of seven CSOs[1], confiscating and damaging property in some of the offices. Following the raid, the director of Al-Haq, one of the organisations targeted, was intimidated and threatened that he would pay a ‘personal price’ if Al-Haq continued its work.

To date, there has been no accountability for the killing of Palestinian-US Al-Jazeera journalist Shireen Abu Akleh, who was killed over four months ago, in May 2022, while reporting on an Israeli raid in the occupied West Bank city of Jenin, despite wearing a helmet and flak jacket marked “PRESS”.

Violations of Palestinians' digital rights are commonplace, with major social media platforms such as Facebook, WhatsApp, Instagram, and Tik Tok complicit in silencing Palestinian voices. For example, during the Sheikh Jarrah protests, where families faced forced eviction and imminent threat by Israeli settler organisations, social media was one of the most important vehicles to share evidence of human rights violations. However, users were systematically silenced on an egregious scale, including by deletion of content, blocking or closing of accounts, hiding hashtags, and reducing content reach. Offline, Palestinians who continue to express their discontent by staging protests are often met with violence from the IOF and settlers.

In addition, violations of civic space and Palestinian human rights are committed by Palestinian authorities. Both Hamas in Gaza and the Palestinian Authority (PA) in the West Bank are responsible for harassing, detaining and attacking activists, journalists and protesters.

“The deterioration of civic freedoms in Palestine due to increasing attacks by Israeli Occupying Forces can no longer be ignored. It's time for democratic governments to break their silence and condemn Israel's apartheid regime of systematic racial domination and oppression over the Palestinian people as a whole and to impose economic and diplomatic sanctions on Israel,” said Aarti Narsee, Civic Space Research Officer.

Palestine is currently rated ‘Repressed’ by the CIVICUS Monitor. There are a total of 50 countries in the world with this rating (see all). This rating is typically given to countries where civic space is heavily contested by power holders, who impose a combination of legal and practical constraints on the full enjoyment of fundamental rights (see the full description of ratings).