CIVICUS, the global civil society alliance, continues to call on the UN Human Rights Council to establish an independent investigative mechanism to address human rights violations and abuses in the Philippines to further accountability and justice. A new brief published today, shows that one year on from the adoption of a profoundly weak resolution at the Council, serious civic freedoms violations continue to occur, creating a chilling effect within civil society.

The CIVICUS Monitor has documented the arbitrary arrest and detention of human rights defenders and activists on fabricated charges. In a number of instances, the activists have been vilified and red-tagged – labelled as communists or terrorists – in relation to their work prior to their arrest. There have also been reports of evidence planted by the police and military forces to justify arrests or violence against activists.

Activists have been killed over the last year, both by the security forces and by unknown individuals. In many instances, activists were killed after being red-tagged. In virtually none of the cases has anyone been held accountable for the killings. In one incident, nine community-based activists were killed in coordinated raids, known as the ‘Bloody Sunday’ killings, which took place across four provinces in the Calabarzon region on 7 March 2021 by members of the Philippine security forces. The killing of journalists as well as judicial harassment against them has also persisted. 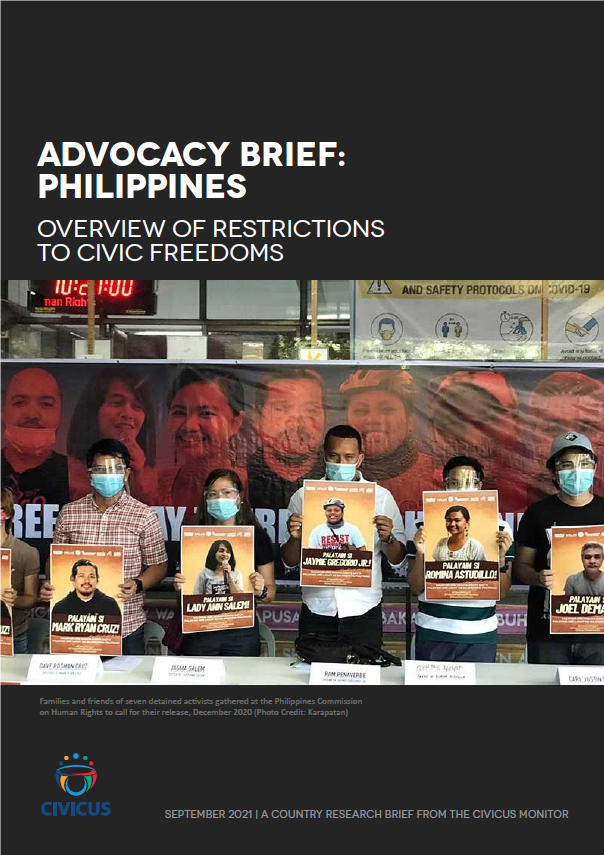 In July 2021, the Philippine government and the UN formalised a human rights programme which includes strengthening domestic investigation and accountability mechanisms; improved data gathering on alleged police violations; civic space and engagement with civil society and the Commission on Human Rights (CHR) to be implemented.

“The current actions by the UN Human Rights Council have failed to deter the criminalisation and attacks against activists and journalists, which has continued over the year, with impunity. The new joint programme seems to be just more window dressing by the Duterte regime to evade accountability. It is time for the international community to listen to civil society voices and establish an independent investigation to hold the perpetrators to account”, said Lisa Majumdar, CIVICUS UN advocacy officer.

Human rights groups have also documented an assault on the judiciary. An investigative report by the Free Legal Assistance Group (FLAG) found that at least 61 lawyers, judges and prosecutors have been killed under the Duterte administration since 2016. There have been no convictions so far in any of the deadly attacks recorded.

The new brief outlines other tactics used to silence civil society that have ranged from freezing their accounts to launching  smear campaigns against them. In June 2021, the Anti-Money Laundering Council (AMLC) froze the bank accounts of Amihan, an organisation of peasant women, which the authorities alleged were linked to communist rebels. Bank accounts of eight other nongovernmental organisations and civil society groups based in Mindanao were also covered by the order.

Human rights alliance Karapatan has been subject to  a spate of cyberattacks since July 2021 against its website, amid an online solidarity campaign #StopTheKillingsPH, which calls on the government to stop attacks against human rights defenders. Earlier attacks against Karapatan and alternative media outlets were traced by Qurium - Sweden-based media foundation - to the Office of the Assistant Chief of Staff for Intelligence of the Philippine Army as well as the Department of Science and Technology.

“Civil society groups have been at the forefront of monitoring violations perpetrated by authorities around the deadly war on drugs, and their assaults on activists. Despite the threats and litany of attacks against them, they have refused to be silenced. The international community owes them support and protection,” said Majumdar.

Following tireless research and advocacy efforts by civil society, in June 2021, the International Criminal Court (ICC) Prosecutor Fatou Bensouda requested judicial authorisation to proceed with an investigation into crimes committed in the Philippines from 1 November 2011 - the date the Philippines became an ICC member - until 16 March 2019. On 15 September 2021, Pre-Trial Chamber I of the International Criminal Court granted the Prosecutor’s request to commence the investigation in a landmark development.

In December 2020, the CIVICUS Monitor, a global research collaboration that rates and tracks respect for fundamental freedoms in 196 countries, downgraded the Philippines from ‘obstructed’ to ‘repressed’ in its People Power Under Attack report 2020.