Repression in Paradise: Assault on fundamental freedoms in the Maldives

Repression in Paradise: Assault on fundamental freedoms in the #Maldives. New report on #MaldivesInCrisis https://t.co/LTkQWELRUr pic.twitter.com/5whBOItY2X 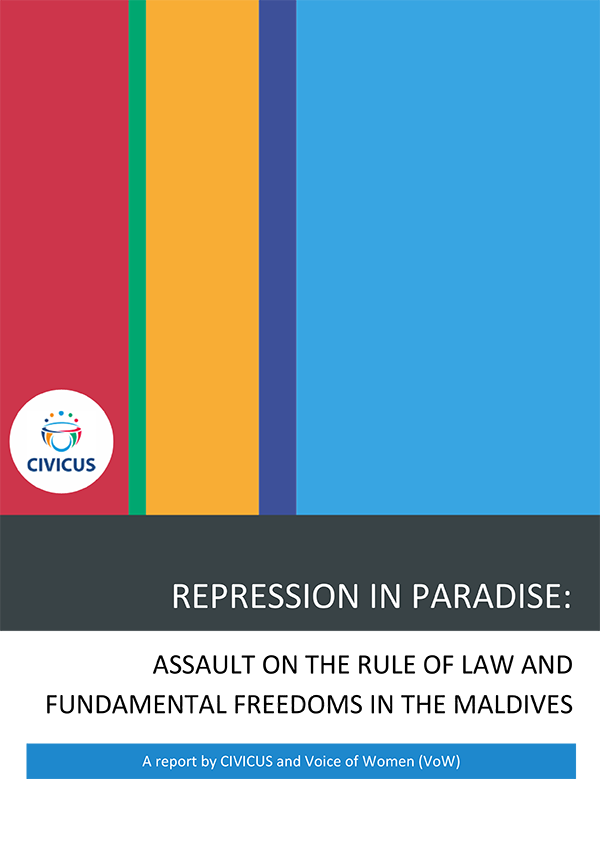 The Maldives, an archipelago of islands in the Indian Ocean, was thrown into a political crisis on 1 February 2018 when the country's Supreme Court ordered the release and retrial of a group of opposition politicians, including exiled former president Mohamed Nasheed. President Yameen Abdul Gayoom refused to comply with the ruling, leading to mass protests in the capital, Malé.In response, the President declared a state of emergency, provided the security forces with sweeping powers and suspended constitutional rights. He also removed and arrested two Supreme Court judges.

The Government of the Indian Ocean island nation of The Maldives is undermining the rule of law and intensifying a brutal crackdown on its critics. That’s the finding of a new report Repression in Paradise by CIVICUS and Voice of Women (VoW), in a deepening crisis that has drawn international condemnation.  The report, highlights how the judiciary has been undermined through the judges’ arbitrary arrest, while scores of opposition politicians and activists face a variety of trumped up charges, ranging from bribery to terrorism. Local human rights groups have also documented the ill-treatment of these detainees in custody.

The space for civil society in The Maldives is rated as obstructed by the CIVICUS Monitor, an online platform that tracks threats to civic space in every country. An obstructed rating indicates that power holders contest civic space, undermine civil society organisations and constrain the fundamental civil society rights to freedom of association, peaceful assembly and expression.