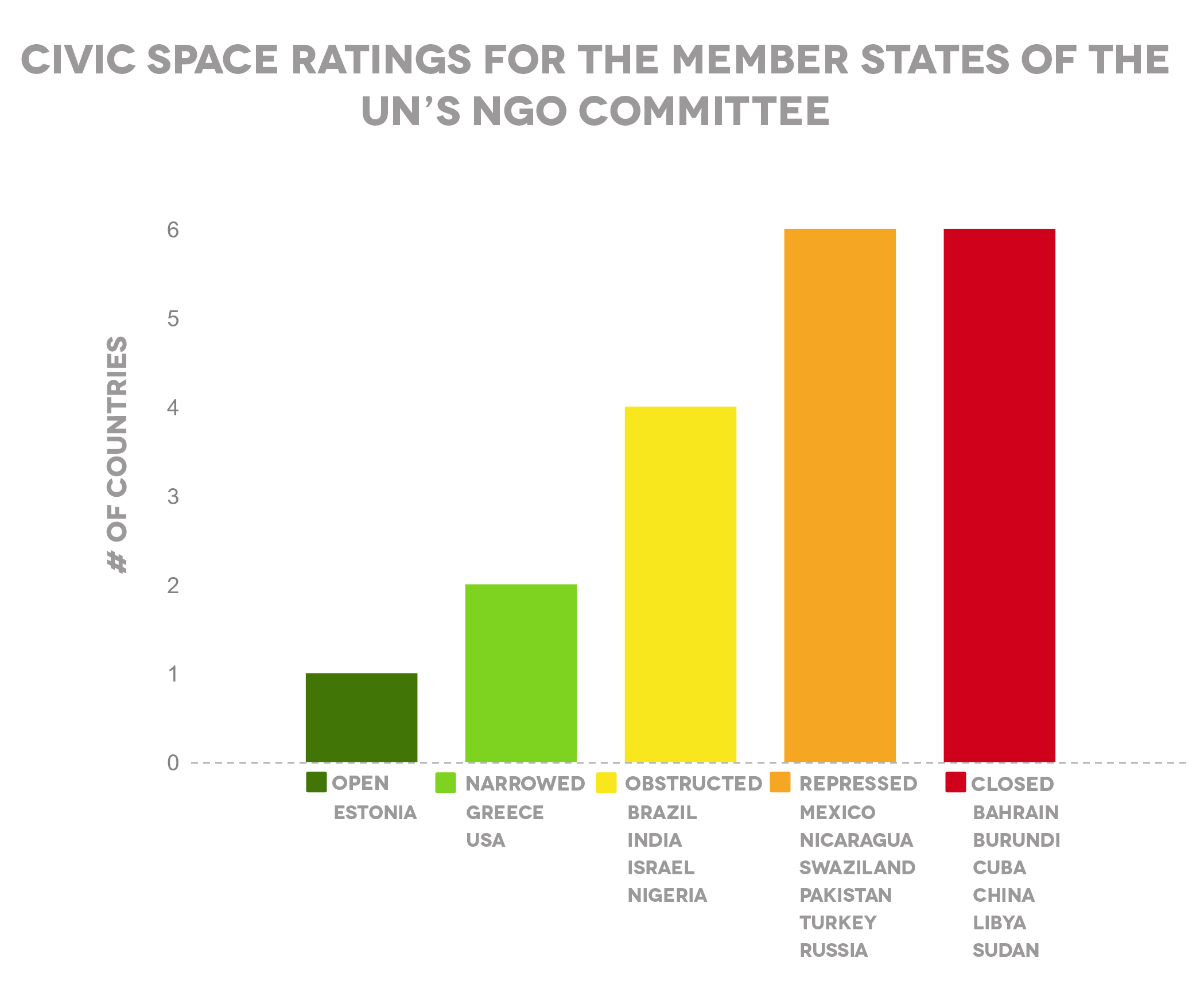 The UN’s NGO committee has again deferred a substantial number of applications from national and global organisations seeking to gain UN accreditation. Many of these organisations do vital work supporting the UN’s ambitions, from sustainable development to universal human rights, and are seeking accreditation in order to monitor and influence proceedings at UN headquarters.

The committee’s actions are increasingly skewing the participation of NGOs at the United Nations. For example, at the annual Commission on the Status of Women organisations with expertise and a commitment to the UN’s Universal Declaration on Human Rights are losing access to organisations that promote discrimination on the basis of gender or sexual orientation.

“Instead of using their seats on the UN’s NGO committee to encourage and promote civil society’s vital contributions to sustainable development and human rights, some members of the committee relish their power to veto applicants,” said CIVICUS Advocacy Officer Lyndal Rowlands. “The often arbitrary nature of the committee’s decisions lead to a system that is more luck of the draw than merit-based selection.”

“Governments such as India, Nigeria and Sudan all blocked applications from worthy organisations, simply because the organisations happen to work in these respective countries,” said Rowlands. “These governments in their important roles as stewards of civil society participation have shown that they fail to grasp the vital importance of a vibrant and diverse civil society to achieving the UN’s ambitious goals.”

NGOs that were successful in gaining accreditation in 2019 included global campaign group Avaaz. Meanwhile human rights groups such as the Gulf Centre for Human Rights (GCHR), found that their applications were again deferred by several months, after years of waiting for accreditation. GCHR protects human rights defenders and promotes human rights in 12 countries that mostly have become increasingly restrictive in recent years since the so called Arab Spring.

According to data from the CIVICUS Monitor, just one of the 19 members of the committee Estonia, models an open environment for civil society at home. Six members of the committee - Bahrain, Burundi, China, Cuba, Libya and Sudan – are rated as closed by the CIVICUS Monitor – with non-governmental organisations in these countries denied the right to exist and their leaders routinely jailed, disappeared or murdered.

Sudan, which is currently the Chair of the Committee, has recently violently cracked down on civic freedoms, using excessive force during recent mass protests. It used its position on the committee to delay the applications of several non-governmental organisations working in Sudan, even while millions of Sudanese people rely on NGOs and UN agencies for humanitarian assistance.

India, which this year again delayed the application of the International Dalit Solidarity Network, is known internationally as the world’s largest democracy, an identity which is increasingly at odds with India’s approach to non-governmental organisations. India routinely represses the work of its diverse and vibrant community of non-governmental organisations, including through the arbitrary arrests of five leading Indian human rights defenders and Dalit rights activists in July 2018.

CIVICUS calls for all members of the committee to immediately discontinue any arbitrary actions to block applications from non-governmental organisations and strongly encourages governments that are committed to promoting an enabling environment for civil society to nominate themselves for future seats on the Committee.