The deterioration of civic space in Colombia, Guatemala and Honduras

CIVICUS is extremely concerned about the spate of attacks against HRDs journalists and peaceful protestors that has taken place across Colombia, Guatemala and Honduras.

We remain gravely alarmed by the striking inattention given to the disturbing increase of killings of HRDs since the signing of the Peace Agreement by the Colombian government and the FARC guerrilla group. Local partners report that 106 defenders were killed and 310 attacks on media workers and journalists took place during 2017. In addition, arbitrary detentions, attacks and judicial harassment are also on the rise.

Moreover, CIVICUS is concerned about the situation in Honduras.  Honduras has been placed   on the CIVICUS Monitor Watch List because of the violence surrounding the November 2017 contested presidential elections. Protests were met with excessive police force and more than 20 protesters were killed, with many others injured or detained. Additionally, reports show increasing attacks against HRDs who denounce the repression of protests.  There has also been an increase in violations of the right to freedom of expression, including smear campaigns, threats, harassment and physical attacks against media workers and activists expressing dissent on the media.

Finally, Mr President, CIVICUS is extremely concerned by the continuing violence against local communities involved in land rights struggles in Guatemala. These violations are perpetrated by state security forces or by private security working under the orders of private corporations. The authorities have not taken any action to protect these communities. During one such event in late November 2017, a Maya community that had been evicted from their land and were camping on the side of a road was attacked by security guards that opened fire, killing one community member and injuring another.

In all three cases, CIVICUS calls on the authorities to stop the use of violence against activists, media workers and peaceful demonstrators, to conduct investigations on threats and attacks, and ensure perpetrators of unlawful killings are brought to justice without further delays. 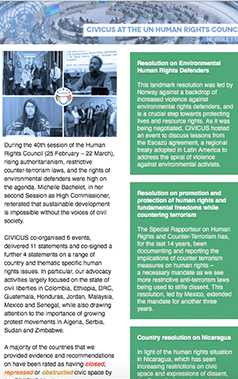