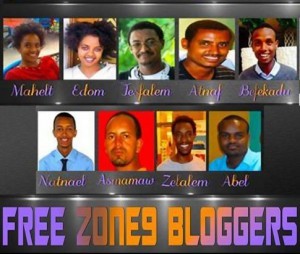 Soliyana Gebremichael, founding member of the Zone9 bloggers collective and Coordinator of the Ethiopian Human Right Project, speaks to CIVICUS about the Ethiopian government's ongoing persecution of civil society and independent media in the run-up to general elections scheduled for May 2015.

1) Six members of the Zone9 Bloggers collective were imprisoned last April. Can you tell us why you believe they were arrested and share any recent developments in the case?

With nearly 20 journalists behind bars, Ethiopia maintains one of the most repressive environments in the world for freedom of expression. The arrest of six Zone9 Bloggers and three journalists in April 2014 is unquestionably symptomatic of the government’s growing intolerance of dissenting voices in the run-up to general elections scheduled for May 2015. Zone9, which was established nearly three years ago by a group of young, concerned activists in Ethiopia, was targeted in large part because we were mobilizing youth online to demand the rights endowed to us under the constitution.

During our first year, we operated largely unencumbered. However, the year preceding the arrest of the Zone9 bloggers was marked by routine harassment, including online surveillance and active monitoring and intimidation by security officers.

During their first three months of detention, members of the Zone9 bloggers were also subjected to unlawful interrogation tactics including torture and deprivation of sleep and food in a blatant attempt to coerce them into signing false confessions. The prosecutor has repeatedly postponed their trial under specious pretences and nearly a year after their arrest the prosecutor has only just declared that the formal hearing will start on 18 February 2015. We have also only recently learned that Zone9 has been accused of “creating serious risk to the safety or health of the public or section of the public” under article 3 (2) of the widely criticized 2009 Anti-Terrorism proclamation. It is also important to mention that this week Freedom Now and the Ethiopian Human Rights Project submitted a petition to the UN Working Group on Arbitrary Detention (UNWGAD) on the case of the Zone9 Bloggers.

2) With nearly 20 journalists in jail the persecution of Zone 9 appears to be part of a larger crackdown on dissent in the country. Can you describe the general climate for independent reporting and media in Ethiopia?
Following the arrest of the Zone9 bloggers, the authorities arbitrarily arrested the leaders of several political opposition parties and levelled spurious charges against the staff of five of Ethiopia’s remaining independent magazines and newspapers. Of the five publications charged, three were convicted of inciting violence and outrages against the constitution, while the cases of the two other media houses are still being adjudicated. Among those charged were renowned journalist and former editor-in-chief of ‘Feteh’ (Fact) magazine, Temesgen Desalegn, who was sentenced to three years in prison in October 2014.

In 2014, we also witnessed an exodus of journalists to neighbouring countries in an attempt to escape arrest and other forms of state sponsored harassment and persecution. After the charges against the five newspapers and magazines, more than 20 journalists fled to countries in the region.  Those that have remained in Ethiopia have been forced to self-censor resulting in essentially no independent media in the country.

3) General elections are scheduled in Ethiopia for May 2015. What impact has the crackdown had on the prospect of free and fair elections?
Generally speaking, the recent crackdown has severely heighted the contagion of fear in the country and people are highly reluctant to engage on what are popularly seen as sensitive, political issues. The events of 2005 when the government extra-judicially killed nearly 200 people after contested national elections are still fresh on peoples’ minds.  The government has also escalated its repression, including harassment, intimidation and arbitrary detention, of opposition political parties. At this point, given the near complete evisceration of independent civil society and opposition parties and the deafening silence of the international community, I do not foresee any change in the result of the coming election.

4) With such deliberate violations of fundamental democratic rights in the country, why do you think the international community and donors have largely remained silent?
The international community has consistently prioritized counterterrorism measures and regional “stability” over the need to support or show solidarity with the larger Ethiopian public calling for respect for fundamental freedoms in the country. While we fully appreciate the international community’s geo-political concerns, they must also take into consideration the level of instability that persistent depravations of democratic rights engender in any society. In Ethiopia, which has only one opposition party member in parliament, virtually no independent media and civil society and a highly politicized judiciary, there is very little accountability for the vast sums of money entrusted to the federal government to support democratic and economic development in the country. The maintenance of the status quo in Ethiopia through the provision of huge amounts of donor aid without adequate and effective support for democratic consolidation is a waste of the taxpayers’ money.

Soliyana Gebremichael is a founding member of the Zone9 Bloggers collective and Coordinator of the Ethiopian Human Right Project.  Zone9 was established by nine youth activists in May 2012 in Ethiopia to mobilize youth across the country. Six of member of Zone9 are currently in prison while three others, including Soliyana, have been forced into exile to avoid imprisonment. Soliyana is also currently working as the Coordinator for Ethiopian Human Rights Project, a civil society group which seeks to bolster the advocacy work done by domestic and international actors to advance human rights in Ethiopia.