CIVIL SOCIETY: ‘Music can be an entry point because it’s the last thing someone could take away from you’ 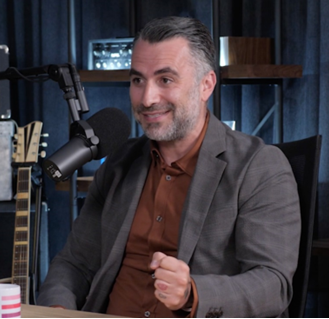 CIVICUS speaks with Darcy Ataman, founder and CEO of Make Music Matter, a civil society organisation based in Canada that uses the creative process as a therapeutic tool to help empower excluded groups and people.

Music isn’t necessarily the first thing people associate with civil society work. How do you use music as part of your work?

We use music for two main purposes. One is the healing of trauma, and particularly of post-traumatic stress disorder, anxiety and depression. The second is to create opportunities or vectors for advocacy. We do all this through our Healing in Harmony music therapy programme.

We work with groups, usually of 10 to 25 people. Working as a group brings safety, especially when you’re in the creative process of singing and writing. But we don’t work with groups so large that participation gets diluted and ceases to be effective.

We always recruit participants through local partnerships. All operational staff are local and Indigenous, wherever we work. And programmes are set up to fit into a larger care model. For example, our flagship site is at Panzi Hospital in Bukavu in the Democratic Republic of the Congo (DRC). Patients come to us from the hospital: women who come in for surgery get their physical healing and then get referred to us for mental, psychological and spiritual healing before going back to their villages.

In eastern DRC there are lots of survivors of sexual violence, due to way sexual violence has been used as a weapon of war there. But trauma can come in a multitude of ways and our results are always the same.

What we do is build little recording studios wherever we operate and insert our programme into a larger holistic care model. People come in twice a week. They work for about an hour with a local music producer in tandem with a local therapist.

It’s a four-month cycle: for the first three months they go through the creative process of writing and recording an album, just like any other artist. While that is happening, we interject cognitive behavioural therapy in a way that’s not particularly noticeable.

So people don’t come in thinking they are coming for a therapy appointment, which has a lot of stigma; they come in to do art in a fun setting.

That is why our attrition rates are almost nil. We’ve had at least 11,000 people go through the programme globally and you could count with one hand the amount of people who didn’t finish – and that was typically because they got a good economic opportunity.

We analyse the music that comes out of this process. A lot of experiences people have gone through are so overwhelming that talking about them directly would retraumatise and retrigger the brain. But through lyric writing and metaphor and music, it gets out of people’s heads in a way that doesn’t cause retraumatisation. And once it’s out of their head and articulated in one form or another, we can set a treatment pathway.

How did you get started?

Our origins were organic. While I have a psychology degree, professionally I started as a music producer. In 2009 I was in Rwanda for five weeks filming a documentary and recording an album. We had one day off and decided to give local kids a fun day of recording, so we took some equipment to this little school in a village three hours away in the hillsides. When we got there, we learned the entire village had been waiting for us for hours. The schoolroom was packed. There were kids literally crawling through the windows trying to get in. These were kids 12 to 15 or 16 years old, dressed in homemade hip-hop outfits. They knew the lyrics of all the latest rap songs, even though they didn’t have electricity at home.

They handed us the lyrics of the songs they had written for us to record, and it was all very heavy subject matter: about HIV/AIDS and what it does to communities, about they not wanting to sell their bodies to live another day, about their desire to go to school. There was not one frivolous song in there. We had given them no direction. We didn’t tell them what to write. This was simply what was on their minds, and we realised that for them music was an acceptable way to talk about taboo issues they couldn’t normally talk about.

I had the realisation that something special was happening and thought this was what I, as a professional producer, could do to help. And it was something that nobody else was doing.

How effective is the programme, and what do you think explains this?

We monitor and evaluate our programme very closely. We quantify everything. We analyse our impact on variables from school enrolment and permanence to adherence to drug recovery programmes. A year or two ago our first peer-reviewed study was published. It was terrifying, because we couldn’t ethically keep going if we found we were not achieving results. But the results showed that this was very much like a magic pill: it really worked better than anything else.

I think effectiveness lies in the programme’s insertion into a larger model. We want to be the last missing psychosocial piece. We don’t want to set people up for failure. For instance, we have another site in rural DRC that started in 2016 and even though we had the funding – we even constructed our own buildings for the studio – we paused and waited until our partners’ microfinancing programme was operational because we didn’t want to heal people psychologically, pump them up and then have them fail due to lack of opportunity to be financially independent. So we have these checklists we do before we start operating.

Our outcome is the healing, and our output is the music. We lead with music: it’s fun, it’s exciting, it’s our passion. But behind the scenes is a very serious therapeutic intervention. We use music almost as a trick that attracts people and retains them. And in the meantime, we do other things, so at the end of each four-month cycle there’s an album done by this group.

The music they help create with the local producer comes back to us for mixing and mastering. We have a team of about 100 engineers from all over the world who do this as volunteers. And the music gets sent back to the community and disseminated in whatever ways the local community consumes music, be it AM radio, MP3 players or CDs. We also release the music globally on digital platforms.

People own the rights to all their music so they can get royalties. And it helps in terms of advocacy because this is how they tell their stories directly to the world. This gives power back to people on the ground and also helps rebuild their sense of self-worth. The final piece of that four-month cycle is a community concert where they perform the songs they have written.

For participants, it is a sort of symbolic graduation, and it also brings communities back together. Survivors of sexual violence who’ve been stigmatised or kicked out of their homes or villages now go on stage in front of a lot of people – we easily get over 1,000 people per show. They sing a song they wrote about their story. Shame is gone, agency is back. Owning your story changes the way the community sees you. I’ve seen husbands who kicked their wives out ask them back and wives say no and laugh at them. I’ve seen mothers of children born of rape start to take care of them for their first time, breaking the cycle.

Do you work exclusively in places where there’s collective trauma from war? Is your focus on violence against women, or do you also work with other target groups?

Our data demonstrates that our results are equal across the board, no matter what culture or context or reasons for trauma. We have six sites in the DRC, but we also work in Guinea, Peru, Rwanda, South Africa, Turkey and Uganda, and we’re just starting to work in Canada.

The idea started in Rwanda, where we worked with the trauma caused by HIV/AIDS, orphaned children and obviously the genocide. Our work took off in the DRC, where participants were primarily survivors of sexual violence, but also with former child soldiers and former sex slaves. In Peru we work with Venezuelan refugees, mostly young kids. In Turkey we work with Syrian refugees who not only have mental trauma from the war but also have physical injuries and disabilities on top of the stigma of being refugees. And in Canada we will be working with Indigenous communities; this work involves a lot of generational trauma that gets passed down.

The most decisive criterion is whether the community wants us there. We do not parachute in or force ourselves in. We start with community sensitisation aimed at the community taking ownership. We wait for them to ask us to come in, otherwise it just doesn’t work. There needs to be community ownership, because if it is just about the funding or the opportunities you are bringing to an impoverished community, on the first bad day you are going to lose them.

One of our sites in rural DRC is literally triangulated by three rebel groups. Sadly, this village gets attacked regularly. But we’ve been there since 2016 and haven’t lost a single cable. No one has ever touched the studio. In fact, quite miraculously we haven’t lost anything from any of our sites. Community partnerships really work.

Do you have any advice to give to other civil society groups about the value of incorporating art into their work?

Music plays a bigger role than you can imagine, simply because it’s the last thing someone could take away from you. If you’re in an active conflict zone, or you live in extreme poverty, or your community has shunned you, or you are in the hospital after being raped, you may have nothing, but you still have your ability to express yourself through art and music. It doesn’t require any equipment and it doesn’t cost anything: you only need to write some lyrics and a melody in your head to express what you feel.

When I first started with this idea, I was ignored, I was laughed at, I was told point-blank that this was never going to work. But third-party, peer-reviewed research has proved that this works for healing trauma. It works better than literally anything else on offer. It is always hard when you come up with an original idea, but you should persevere.