EGYPT: ‘We are dealing with an extremely elaborate, very creative repressive machinery’ 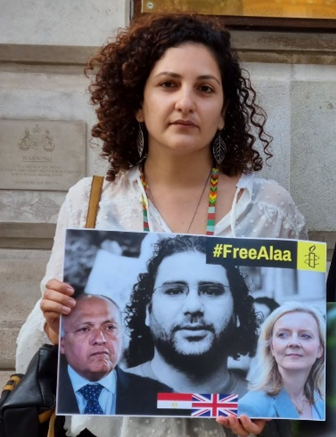 CIVICUS speaks with Egyptian activist Mona Seif about the international campaign for the release of  her brother, British-Egyptian political prisoner Alaa Abdel Fattah, ahead of the COP27 climate summit  taking place in Egypt in November. Alaa played a leading role in the protests that led to the downfall of  former dictator Hosni Mubarak in 2011, but since President Abdel Fattah El-Sisi came to power in  2014,  he has spent most of the time in prison or police detention. He has been jailed since December  2021 on a five-year sentence for sharing a Facebook post denouncing abuses against imprisoned  activists. Following the 2011 uprisings Mona has been part of the No Military Trials for Civilians Group. Alaa and Mona’s father, Ahmed Seif El-Islam, is also a prominent human rights lawyer.

What is Alaa’s situation in prison?

He’s been denied both a British consular visit and his lawyer’s visits. So on 2 April he went on a hunger strike in protest.

It has been nearly 200 days now. To sustain his strike this long, he has been ingesting around 100 to 150 calories per day. Last time I saw him, before I travelled outside Egypt in June, he had already lost a lot of weight and looked quite frail. When I visited him again more recently it shocked me. I had never seen him so weak, so emaciated. He has become a skeleton with a lucid mind.

As his demands are still not being addressed, he is considering going back to a full hunger strike, when he relied only on water and salts. That means his health may deteriorate much faster.

What are his demands?

Alaa’s demands have evolved since he first went on his hunger strike. In the early days, he requested an independent judge to investigate all the human rights violations he had endured since September 2019, which our family reported.

Alaa has been systematically deprived of his basic rights as a prisoner, and while in the Tora maximum-security prison he witnessed horrific crimes. He saw officers preventing detainees accessing any kind of medical care and saw inmates dying after calling for help for hours.

As a British citizen, he demanded access to the British consulate and his lawyers in the UK. He waited for this to happen for four months before he started a hunger strike.

In a recent family visit, Alaa handed my mother and sister a new list of demands concerning the situation of all prisoners and political prisoners, arguing that there is no room for ‘individual salvation’. He now demands the release of all those detained or imprisoned in national state security detention facilities and headquarters after exceeding the two-year maximum pretrial detention period, as well as all people imprisoned for expressing their ideas, convicted for political reasons, or tried by emergency courts.

What tactics are the Egyptian regime using to silence dissent?

We are dealing with an extremely elaborate repressive machinery, which is very creative in coming up with new tactics of repression and shifting them when necessary.

For instance, between 2013 and 2015 the government mostly dug up old assembly laws and used them to crush protests. Since 2015 there has been a steep rise in enforced disappearances: people are simply kidnapped and disappeared, possibly kept in a military-run detention facility. We continue to lack sufficient information about these sites. Then there was a wave of prosecution of protesters on terrorism charges.

Since 2019 people have been increasingly detained on state security accusations, with detention being renewed over and over without detainees being referred to the courts for as long as the government sees fit. They are doing what we now call ‘recycling’ detainees: people are kept in detention for some time, then released but soon slapped again with the exact same charges – but as there is now a new case against them, they press the reset button and keep them for yet another period of preventive or pretrial detention.

International civil society is our main lifeline. Most of the media platforms are blocked in Egypt. Many lawyers have been harassed and targeted, and some are in prison. A lot of human rights defenders have been pushed into exile, or are continuously threatened and harassed, or have been thrown in prison. So it is increasingly hard to find someone who will speak up on our behalf.

The few civil society organisations that are still operating domestically, and definitely international organisations based abroad, are the main channels through which the families of prisoners and other people in Egypt can voice their concerns, call for help, try to gather some attention and put on some pressure to at least try to alleviate some of the abuses.

Over the past two years, we have increasingly relied not just on international organisations abroad, but also on the Egyptian diaspora. Within their capacity, those who have had to leave Egypt try to bring attention to what is happening in the country.

But we must bear in mind the regime also harasses Egyptians living abroad, often through retaliation against family members who remain in the country. Egyptian embassies in some countries, such as Germany, are complicit with state security services. They send people to harass activists and report on them, so many are afraid of participating publicly in peaceful protests.

We have relied on allied civil society organisations for reporting purposes. The number of rights violations and crimes committed on a weekly basis is enormous, and tactics of repression shift so much that it is sometimes hard to keep up.

I experienced all these changes in tactics first-hand, as a sister of a detainee. But keeping up and documenting everything is overwhelming. Most people doing human rights work in Egypt are burnt out and exhausted. This has been going on for years and everyone has dealt with trauma in one form or another.

How do you view the Egyptian government’s initiative to release some political prisoners ahead of COP27?

The Egyptian regime has released only 500 detainees over the past few months. But there are tens of thousands of political prisoners in Egypt.

But this is far from the truth. They are not willing to do the bare minimum. Alaa’s case makes clear that the regime is not serious about resolving the situation of political prisoners. Alaa continues to be denied his basic rights both as an Egyptian and a British citizen. I’m worried this may continue up until a point the damage will be irreversible.

If such a high-profile prisoner is subjected to these kinds of human rights violations, including torture, one can only imagine what is happening to other prisoners without Alaa’s support and visibility. I think the release of a few people is the best we can hope for.

Needless to say, no one is being held accountable for the torture or ill-treatment of prisoners. Since 2019 the General Prosecutor has not addressed any complaints concerning the situation in prisons. Whenever a particularly serious human rights violation gets some attention, the PR machinery sets in motion to smear the detainees and their families. And for most families, the focus is on stopping ongoing violations that endanger the lives of their loved ones rather than holding perpetrators accountable. In the long run, it will be a problem that we are all so focused on trying to save as many people from this prison system as possible that nobody is paying enough attention to seeking proper justice and accountability.

Do you think COP27 will provide an opportunity for international solidarity with Egyptian civil society?

The reality is that most governments don’t care what the ruling regime is doing in Egypt. They are willing to turn a blind eye to El-Sisi’s atrocities because he fits into regional arrangements and is easily brought into mega business deals and arms deals that involve a lot of money. Who cares how big a debt he is accumulating on the shoulders of Egyptian people.

This makes it much harder for people working on documenting and exposing the regime’s crimes to try to stop them. At the end of the day, business deals sustain the facade of mutual respect between western governments and the Egyptian government.

The Egyptian government is increasingly aware and taking advantage of the fact that it can get away with so many crimes as long as it keeps satisfying the economic interests of France, Germany, the UK and the USA.

This is all working very well in the run-up to COP27, which the Egyptian regime is clearly using as a whitewashing PR stunt. In doing this, they are being assisted not just by the Gulf countries, which was to be expected, but by many western governments. Despite the recent talk of the USA withholding some of its military aid, if you look at it, the reality is that El-Sisi is getting all the support he needs.

All we can do about this is what we are already doing, which is try as much as possible to make enough noise to bring attention to the crimes and rights violations the Egyptian regime does not want the world to know about. This may come at an extremely high price, but it is what it is. This is the reality of living in Egypt in 2022, under El-Sisi’s rule.

Civic space in Egypt is rated ‘closed’ by the CIVICUS Monitor.