SRI LANKA: ‘The ongoing protests have put the government on the defensive’ 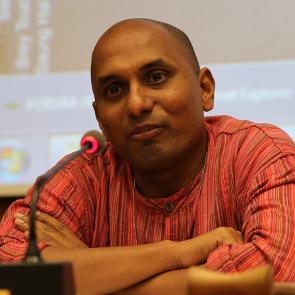 CIVICUS speaks about protests in response to deepening economic crisis in Sri Lanka with Ruki Fernando, a human rights activist, writer and consultant to the Centre for Society and Religion (CSR) in Colombo.

How significant are the current protests in Sri Lanka?

This protest movement is the biggest and most diverse one I have ever experienced in Sri Lanka. The protests are largely driven by angry, frustrated, disappointed citizens. Mainly the protests have been triggered by the ramification of the economic crisis that reached its peak with shortages of fuel, electricity, gas and medicines among many essential items that either disappeared from the market or had their prices hiked.

Most protests have taken place around Colombo, the capital, and its suburbs. Still, there have been protests all over the county. A large continuous day and night protest has been happening at the Galle Face Green in Colombo adjoining the Presidential Secretariat and similar initiatives have appeared in other districts. In addition to the streets, social media has been an important battleground.

Protesters are also now demanding the truth about people who disappeared during Sri Lanka’s civil war and even before. Their demands have expanded beyond the severe financial crisis to call for those in power to be held accountable for war crimes, crimes against humanity, disappearances and killings, disappearances and assaults on journalists.

The protesters are demanding long-term legal and institutional changes to the current governance system that must start with the resignation of the Sri Lankan president Gotabaya Rajapaksa and the Rajapaksa family, the ruling family. Others call for the abolition of the 20th amendment to the constitution, which expanded the president’s executive powers.

Protest slogans calling on the president to ‘Go Home’ are now evolving into ‘Go to Jail’ and ‘Return Stolen Money’.

Do you think the protests will make a difference?

These protests have put the government on the defensive. As a result, the cabinet resigned and the government lost its majority in parliament when more than 40 lawmakers abandoned the ruling coalition to become independent members of parliament. These mass resignations are quite significant, as it proves that small groups can influence the political system. However, I believe we are still long way from any real change and meeting all people’s aspirations, especially for poor people and marginalised groups, including ethnic and religious minorities.

Repressive measures did not last in the face of the ongoing protests. The authorities had to release arrested protesters and revoke the declaration of emergency, the curfew was not extended, and the social media shutdown was withdrawn.

I believe that when President Rajapaksa revoked the declaration of a state of emergency on 5 April, it was because he realised, he was not able to sustain the necessary parliamentary majority that was needed for its continuation.

Most importantly, these protests, which are largely being led by young and students, represent a political awakening of various groups of our nation. Many women, older people, LGBTQI+ people, lawyers, religious clergy, artists and well-known people such as former cricketers have been part of the protests. They have enriched the spirit of defiance, resistance, courage and creativity unleashed by youth, on an unprecedented scale.

How has civil society responded to the arrest of protesters?

More than 50 people, including journalists and bystanders were arrested after the protest had marched on the evening of 31 March to the president’s residence. Other arrests since have led not only to fear, but also outrage. As a result, the protesters have received much public sympathy and support from lawyers, journalists and the public. Some civil society groups support and stand with the protesters, but most significant roles in the protest movement is by ordinary people, especially young people.

Do you think repression will dissuade people from protesting in bigger numbers?

We cannot deny that the proclamation of a state of emergency, curfew and the shutdown imposed on some social media platforms led to fears. At the same time, the curfew was challenged by tens of thousands of protesters who came to the streets to protest despite the curfew. Overall, these repressive measures galvanised more people to join, organise and support protests.

Aside from that, there is fear and uncertainty about what the future may hold for our country. There are many concerns about a potential military–police crackdown, especially after the shooting at protesters in Rambukkana that had led to at least one death and several others injured. There have been other incidents of concern, such as the presence of police trucks at the key protest site, special training for the military at army camp in Ganemulla and police reporting about the main protest site to courts. There are also worries about sustaining the protests and a lack of clear political alternatives. But it has been an inspiring, heartening moment to see so many people, especially young people, standing up, creatively and courageously. As I said earlier, this is a moment of political awakening for many.

They must show solidarity for our struggles for justice, including economic justice, ethnic justice, gender justice and environmental justice. In that sense, the international community must defend and protect protesters and those criticising, questioning and challenging the government.

On the economic level, international financial institutions, foreign governments and multinational corporations must not engage in exploitative and opportunistic practices in Sri Lanka. They should refrain from going ahead with investments that will negatively affect economic justice, economic democratisation and labour rights.

Civic space in Sir Lanka is rated ‘obstructed’ by the CIVICUS Monitor.
Get in touch with Ruki Fernando through his website and follow @rukitweets on Twitter.