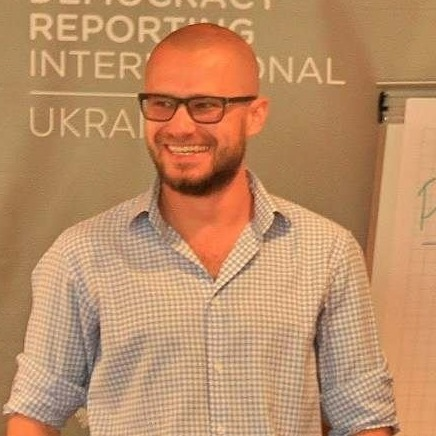 Truth Hounds is a civil society organisation (CSO) aimed at fighting against the impunity of perpetrators of international crimes and grave human rights violations through investigation, documentation, monitoring, advocacy and problem-solving assistance for vulnerable groups. Jointly with Brussels-based International Partnership for Human Rights, The Truth Hounds team has carried out over 50 fact-finding missions to document war crimes in eastern Ukraine and Crimea.

What are the main ways in which your organisation is responding to the Russian invasion?

I’m a board member of the Ukrainian human rights organisation Truth Hounds, which has focused on documenting war crimes and crimes against humanity in war contexts since 2014. We wouldn’t be able to tackle this mission without a highly qualified team of human rights professionals with experience in conflict areas – not only in the east of Ukraine and occupied Crimea but also in neighbouring countries, including in Nagorno Karabakh, a territory disputed by Armenia and Azerbaijan. Having prepared three extensive submissions to the International Criminal Court (ICC) in The Hague, we have developed thorough knowledge of international standards and best practices of evidence collection and systematisation of war crimes.

Thus, when Russia began its invasion of Ukraine on 24 February, I immediately joined a field team of investigators working day and night to document Russian war crimes in our country. Since then, our team members have collected evidence of indiscriminate shelling, targeted attacks against civilians, ecological crimes and other violations of customs of war. On the basis of that, our team has already prepared and published 13 reports revealing grave human rights violations and war crimes committed by the Russian military.

Most of our current efforts in response to the Russian invasion focus on monitoring human rights violations and war crimes committed by the Russian army, international advocacy, support for professional groups and humanitarian and legal aid to people in need.

Our team also supports the Ukrainian prosecutor’s office in chasing perpetrators of war crimes through documentation and monitoring of human rights violations. We also share reports and evidence as much as possible to provide international judicial bodies, including the ICC, with evidence that can one day be used to bring perpetrators to justice.

In the context of the war, we also understand the importance of information, so our team works to produce accurate and reliable information as quickly as possible and shares it with international media groups. We believe that if we share information about Ukraine, global leaders won’t be able to turn a blind eye to the human rights violations that Russia is perpetrating here. Our nation needs support from the whole world; hence, our current mission is to deliver facts from the field to the international community.

How is the conflict affecting Ukrainian civil society’s work?

Ukrainian civil society is in the same boat as the whole nation, and as everyone else, we are trying to keep working despite the difficult circumstances. Some civil society representatives, including well-known human rights defenders, have joined the army to fight and protect the country. Others have had to leave Ukraine, but they are doing their best to operate in exile within their limited possibilities.

While many CSOs moved to western Ukraine to try and resume their activities despite limited technical and financial opportunities, others decided to stay in the eastern and southern parts of the country, to cover humanitarian needs and help with the logistics of relocation of the civilian population. But their capacities are down to a minimum because they are not able to receive much support from international CSOs.

Only a tiny segment of civil society took on board information about a possible Russian invasion and was prepared enough. They have managed to continue working for the past weeks. But even this small group cannot be as effective as it used to be because of the need to hide in shelters during chaotic air and rocket attacks.

Overall, civil society is under tremendous mental pressure, which will have long-lasting effects. This will become yet another challenge for the country once the war is over. Civil society will suffer from post-traumatic syndrome.

What should the international community do to help?

Ukrainian civil society needs advocacy and communications support. Our partners must help us deliver our messages to our allies and governments worldwide. Needless to say, Ukraine cannot win this fight alone. But we share the same democratic values and we need your support.

All of us in contemporary Ukrainian civil society grew up believing in democratic values and we heard time and again that these were the most important principles for the western world. Now we are fighting for these values, we ask the international community to amplify our voices. If it doesn’t, it will be clear that western countries choose their business interests over democratic values. We don’t want to be let down.

Ukraine also needs the humanitarian assistance of international organisations. We understand how hard it is for organisations such as the World Health Organization and the Organization for Security and Co-operation in Europe to organise proper fieldwork. But there is one thing even harder: explaining to people from war-affected regions why these organisations disappear when they need them the most.

Since 2014, when Russia occupied Crimea and invaded Ukraine for the first time this century, Ukrainians have seen thousands of international organisations’ representatives spending their time here, mostly in expensive hotels and restaurants. We were told that were here to try and save Ukrainian lives. But now that Ukrainian lives are in fact under immediate threat, international organisations are not here anymore. For us, they are now invisible and silent.

Civic space in Ukraine is rated ‘obstructed’ by the CIVICUS Monitor.
Get in touch with Truth Hounds through its website or Facebook page.