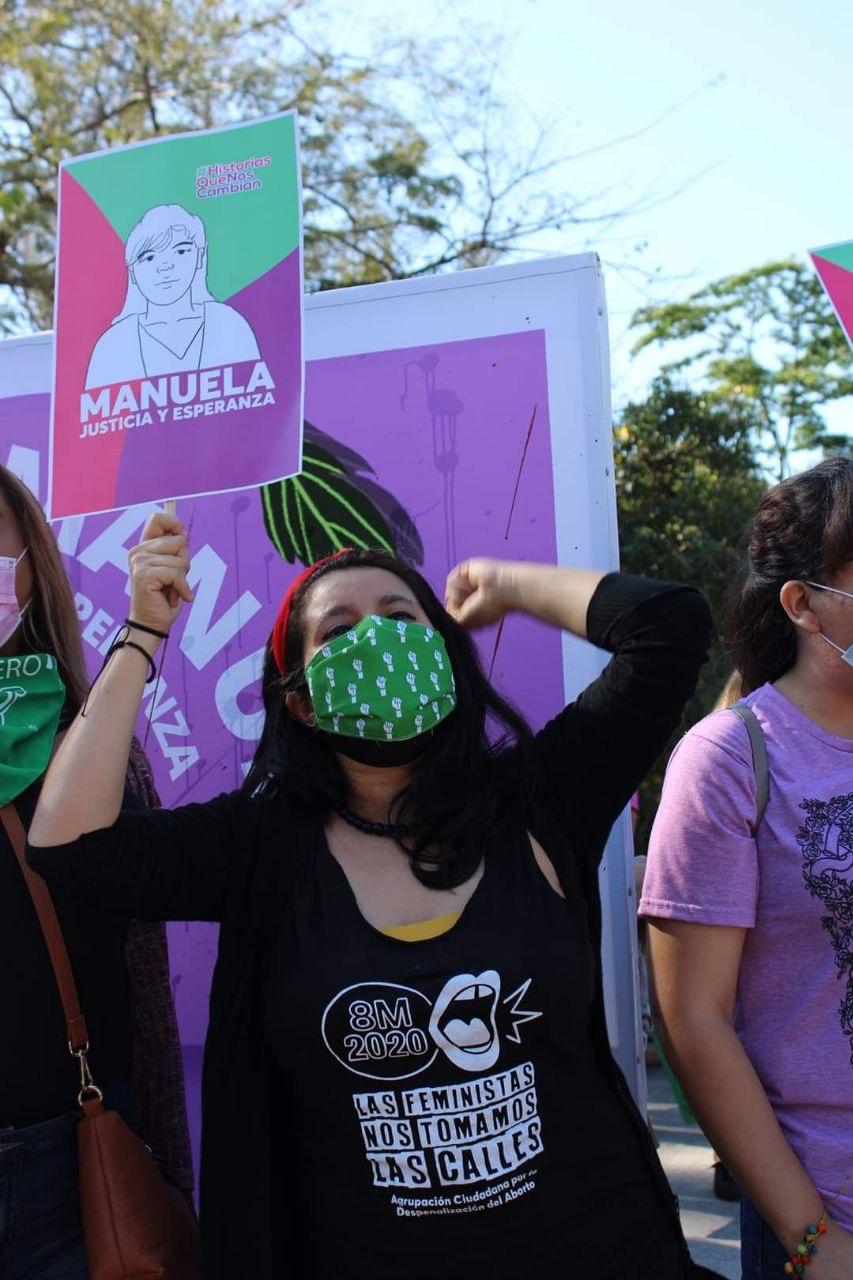 CIVICUS speaks with Sara García Gross about the recent judgment of the Inter-American Court of Human Rights (IACtHR) against the Salvadoran state, and the struggle of Salvadoran women for the right to abortion.

Sara García Gross is advocacy coordinator of the Citizens’ Group for the Decriminalisation of Abortion in El Salvador. Founded in 2009, the organisation promotes public awareness to change abortion laws, provides legal support to women who have been convicted or charged with abortion or related crimes and disseminates information on the importance of women receiving adequate sexual and reproductive healthcare to prevent them resorting to unsafe, life-threatening abortions.

What is El Salvador’s feminist movement demanding when it comes to sexual and reproductive rights?

As feminists we are fighting to change the law that criminalises abortion under all circumstances. In El Salvador women are unjustly persecuted. Women’s reproductive rights are violated, especially for younger women and those who live in poverty and in the country’s rural areas. In this sense, we in the feminist movement are fighting to change a restrictive, absolutist and absurd regulatory framework.

We are also fighting for women’s freedom. There are currently 12 women in prison serving sentences that are extremely unjust. Our fight is for women’s freedom and women’s lives. We want abortion to be legal in El Salvador. We fight for women to have the right to build our own lives. We denounce forced pregnancies; this is a form of torture. There are girls as young as 10 years old who face forced motherhood. There are young women who have not received any sexual education and do not have access to contraceptive methods. We are fighting for the right to comprehensive sex education.

We also fight for the recognition of the rights of LGBTQI+ people, because hate crimes are another cruel form of torture that the state imposes or condones.

What tactics does the Citizens’ Group for the Decriminalisation of Abortion use?

In our struggle for women’s freedom, we have pursued multiple strategies, starting with strategic litigation to obtain everything from commutations of sentences to sentence reviews. Our focus is on achieving freedom, putting into practice the feminist slogan ‘I believe you sister’. We fight for the recognition of the innocence of women facing unjust and absurd sentences.

But the legal route has not been our only key strategy; social mobilisation at national and regional levels has also played a major role. The feminist movement has organised and spoken out in relation to the cases of criminalised women. Sit-ins have been organised in front of embassies in El Salvador and other countries, letters have been sent to the courts and campaigns for reproductive justice have been carried out, including the ‘We are missing 17’ campaign.

Another very important strategy has involved the Inter-American human rights system. We brought the case of a woman known as Manuela to the IACtHR, which recently condemned the Salvadoran state for cruel, inhuman and degrading treatment. Strategic litigation in the Inter-American system has allowed us to address the problems of persecution, torture and judicial and police abuse faced by women in El Salvador. Justice in El Salvador is patriarchal justice.

Another strategy has focused on collecting evidence. We have carried out an investigation called ‘From hospital to prison’, which allowed us to make this problem visible. Through a review and analysis of case files, sentences and investigations, we have been able to understand who anti-abortion legislation targets and who it persecutes: young and poor women living in rural areas. This constitutes intersectional discrimination.

The campaigns, dialogues and debates we promote in academia as well as grassroots communities have also been part of our strategy. Advocacy processes are key, so that when we are able to identify windows of opportunity in the Legislative Assembly or other state institutions, we can promote the submission of new initiatives.

In the past, several bills were submitted to reform article 133 of the Criminal Code to decriminalise abortion on four grounds. These bills were far from getting passed; in some cases they were quickly shelved and in others they languished for years in legislative committees. Women’s organisations were met with great hostility. However, our advocacy strategies allowed us to place the issue of abortion on the public agenda.

What does Salvadoran public opinion think about abortion and what work are you doing to present an alternative narrative to criminalisation?

Among public opinion, there is broad acceptance of abortion when it’s needed to save a pregnant woman’s life: more than half of the population has said so in various surveys.

We live in a conservative country, with some fundamentalist groups calling themselves ‘pro-life’. The reality is that they are in favour of clandestine abortion, criminalisation and women dying. These groups maintain a double standard that we, as organised feminist civil society, work to expose. While women living in poverty are criminalised, those with economic resources are able to travel and access safe abortions. This double standard is unacceptable.

For us, it is important to visualise other narratives and make women’s realities known. Reducing stigma requires showing, humanising and talking about life stories. These are women who had hopes and plans for their lives that state violence prevented them from realising.

Talking about the issue in different places, humanising this reality and questioning this system that imposes the mandate of motherhood – a gender stereotype – allows us to address the issue without stigma or prejudice and, above all, from a human rights perspective.

What are the implications of the IACtHR ruling in Manuela’s case?

This ruling came after years of work and struggle. We started working on the case in 2011, providing psychosocial, political and legal support to Manuela’s family.

Advocacy in the Inter-American system was key. The ruling in Manuela’s case is historic: the IACtHR has recognised that Manuela was innocent, that she really faced an obstetric emergency and that gender stereotypes, starting with the mandate of motherhood, permeated the entire process. The IACtHR has understood that the absolute ban on abortion results in criminalisation and obstacles to access to reproductive rights.

The judgment will have both national and regional effects. The main regional effect is the establishment of jurisprudence that obliges both El Salvador and the rest of the countries in the region to take a series of measures. First, to guarantee professional secrecy of health personnel so that no woman seeking reproductive health services is denounced for alleged abortion-related crimes. Second, to ensure that gender stereotypes are not applied in the judicial sphere, including those claiming that women must act according to a reproductive role and, therefore, with maternal instinct. Third, to implement adequate protocols to attend to obstetric emergencies with accessible and quality health services.

The Salvadoran state will have to carry out some additional actions in compliance with the IACtHR ruling. First, while it is in the process of regulating the obligation to maintain medical professional secrecy and the confidentiality of medical records, it must eliminate the practice of medical professionals denouncing women who seek reproductive health services. Second, it must provide full reparations to Manuela’s family. Third, it must make legislative and policy changes to ensure non-repetition, so that no one else goes through a similar experience, for instance by guaranteeing comprehensive care in cases of obstetric emergencies and adapting pre-trial detention so that it is only used in exceptional cases.

We continue to fight so that women are never again criminalised. There are still 12 women who remain in prison, but we believe that Manuela’s case shines a light on these injustices and gives us the strength to continue fighting. For us, Manuela means justice and hope.

What kind of support do abortion rights groups in El Salvador need from their peers around the world?

It is not acceptable for the exercise of a reproductive right – a right to health – to be treated as a crime entailing prison sentences. We need to shine the spotlight on El Salvador and make the Salvadoran state feel it is being watched. Every chance we get, we must demand freedom for women, freedom for the 12 who are still in prison and reparations for all the women who have faced this kind of criminalisation. We must demand that abortion be legally recognised as a right.