KAZAKHSTAN: ‘The quarantine became a sort of cover for the government to persecute civil society’

CIVICUS speaks to Asya Tulesova, an environmental and civic rights defender from Kazakhstan. On 8 June 2020, Asya was arrested and detained after taking part in a peaceful rally in the city of Almaty. She was released on 12 August 2020, but with restrictions on her freedom. Asya was profiled in CIVICUS’s #StandAsMyWitness campaign, launched on Nelson Mandela Day, 18 July, to call for the release of human rights defenders who are imprisoned, persecuted, or harassed for standing up for freedom, rights and democracy and calling out corrupt governments and multinational companies. 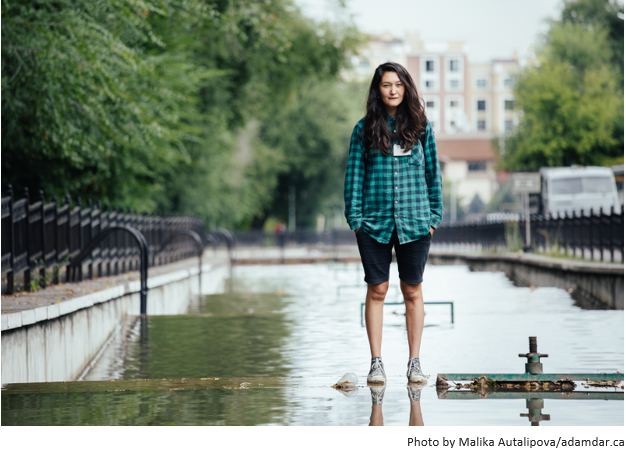 Would you tell us about your background and your environmental activism?

For the past few years, I have worked for a civil society organisation, the Common Sense Civic Foundation, that focuses on community development. We work on environmental and educational projects aimed at improving the quality of life of local communities. In 2015 we launched our air quality monitoring project in Almaty with the aim of giving give people access to free, up-to-date air quality information in the city. The project had a considerable effect on people's understanding of the importance of the issue.

As I realised that air quality is a political issue, I tried running for the local council. However, my candidature was withdrawn due to minor discrepancies in my tax income declaration. This same reasoning was used to take down hundreds of independent self-nominated candidates all over Kazakhstan. We sued the central election commission but were unable to persuade the court to restore my candidacy regardless of the fact that we had all the evidence to support my case. My case is now being considered by the United Nations Human Rights Committee.

We continued our environmental activism by publishing articles, doing research on air pollution, participating in public events and organising public talks on the issue. In April 2019 my companion, activist Beibarys Tolymbekov, and I were arrested for holding a banner at the annual Almaty marathon; our friends Aidos Nurbolatov, Aigul Nurbolatova and Suinbike Suleimenova were fined for filming us holding the banner. As a part of a young activist movement, we wanted to draw people’s attention to the unfairness of the upcoming presidential elections and the lack of independent candidates. Beibarys and I received 15 days of administrative arrest; while under arrest I went on a hunger strike to protest against the court’s decision, and at some point I was punched in the stomach by my cellmate for refusing to comply with her demands to end my hunger strike. Our detention resulted in a series of protests around the country and a rise of youth political engagement. We continue our work in the hope that our efforts will bring more independent candidates to the elections.

Being an activist in Kazakhstan is associated with a certain degree of constant pressure from the government and so-called law enforcement authorities. Many activists and human rights defenders, as well as journalists, live under intense scrutiny and are under constant surveillance and intimidation by or on behalf of law enforcement agencies.

What happened during the protest in June 2020 that led to your arrest?

During the protest on 6 June 2020 I witnessed police brutality towards peaceful protesters. This wasn’t the first time; every ‘unauthorised’ peaceful rally we have had so far has been accompanied by the excessive use of force by the police. But this time, I decided to stand in front of one of the police vans filled with people unlawfully detained by the police in an attempt to prevent the van from leaving. I was attacked by several officers, who dragged me away from the van and, after I attempted to return, pushed me down to the ground. In such emotional state, I then knocked off a police officer’s cap in protest against the unlawful police actions and detention of peaceful protesters. It’s hard to articulate what was going through my head at that moment. I was definitely in a state of shock.

What was it like to be imprisoned? Were you afraid of contracting COVID-19?

I was in prison for more than two months. The detention facility I was placed in was located on the northern edge of Almaty. I was brought in at night and first placed in a quarantine cell for newly arrived detainees, where I spent over 10 days getting acquainted with the internal rules of the facility. After that I was relocated to a different cell.

Due to the COVID-19 pandemic, visits from family members and friends were forbidden. I was only able to speak to my mother twice a week for 10 minutes through a video call and receive visits from my lawyers every other week. The conditions in the facility were much better than those in the temporary detention facility at the police department where I spent two days prior to that. The cell was relatively clean and had two bunk beds for four people, a washbasin and a toilet. We would take turns cleaning the cell. Two of my cellmates smoked, in the toilet. We were fed three times a day, mostly porridge and soup. We were taken for ‘strolls’ five times a week in a specially designed facility, a cell with no windows and no roof. Our strolls would usually last 15 to 20 minutes so I had to write a complaint to the facility authorities so they would comply with their own internal regulations and allow a full hour for our strolls. We took showers once a week, 15 minutes per person.

A few times a week I would receive care packages from family and friends. Their support was very helpful in keeping my spirits up. I received a radio from Marat Turymbetov, also an activist, whose friend, activist Alnur Ilyashev, had been detained in the same facility for his criticism of the ruling party, Nur Otan. We would spend a lot of time listening to the radio waiting for news, but most news was about COVID-19. We would also hear occasional rumours about COVID-19 cases in the facility but nothing certain, so I wasn’t particularly afraid of contracting the virus. My mother, however, was very concerned about it and would send medicine to me every now and then. The pandemic has been very tough on our country, taking the lives of many.

This time around I personally haven’t experienced any major violations while in detention, apart from the non-observance of some internal rules by staff. I know other detainees spent months in the facility with no visits from their investigator, lawyer, or family members. I was suspicious at first when in the temporary detention facility, I was placed in a cell with the same woman who was with me in the special detention facility for administrative detainees a year earlier.

I can’t say that I feel I have been detained for a long time, but it was long enough for me to grow appreciation and compassion for activists and other people who have spent months and years in prison. For instance, human rights defender Max Bokayev has been in prison for over four years for supporting a peaceful rally against an illegal land sale to Chinese companies. During the quarantine, many activists and politicians were subjected to searches and detention, so the quarantine became a sort of cover for the government to persecute civil society. Among the detained activists were Sanavar Zakirova, who has been persecuted for her attempts to register a political party, and activists Abay Begimbetov, Askar Ibraev, Serik Idyryshev, Askhat Jeksebaev, Kairat Klyshev and many others.

What is your reaction to the outcome of your case?

I do not agree with the sentence I received, which is why we are going to appeal. The court should take into account the degree of danger to society that the acts I committed pose, which hardly constitute a criminal offence. I am, however, sorry for the lack of self-control and rudeness I showed. I am a firm believer in non-violent protest and my case is a great opportunity for us and the government to condemn violence on both sides.

What sort of support do activists like yourself need from the international community?

I am very grateful that my case has received international attention and support. It was an honour to be represented in the CIVICUS #StandAsMyWitness campaign. I am also very grateful to my mother, my lawyers, my family, friends and supporters from Kazakhstan and around the world, who came up with a lot of creative ideas to raise public awareness and bring much-needed attention to my case and the issue of police brutality in Kazakhstan. I personally was very inspired by one of the initiatives launched by my good friends Kuat Abeshev, Aisha Jandosova, Irina Mednikova and Jeffrey Warren, Protest Körpe, a simple and visually beautiful way of showing one’s demand for justice and human rights in a very gentle, caring and loving way. It is easy to join. Most of Protest Körpe messages are universal and relevant to many countries. So let’s make our messages heard! I feel that we can learn new creative tactics from Protest Körpe and other initiatives and adapt them to our local context. Wouldn’t it be great if such campaigns and movements could establish a network to share and build on each other’s experience?

Civic space in Kazakhstan is rated as ‘obstructed’ by the CIVICUS Monitor.
Get in touch with Asya through Facebook.