GHANA: ‘Work in the corner of your community has a potential to cause change at the top’

Following a year marked by massive mobilisation on the climate emergency, CIVICUS is interviewing civil society activists, leaders and experts about the main environmental challenges they face in their contexts and the actions they are taking. CIVICUS speaks with Perk Pomeyie, a climate organiser, environmental advocate and artivist affiliated with the Ghana Youth Environmental Movement (GYEM), a youth-led environmental group that advocates and campaigns for a sustainable environment and a just world for the current and future generations. GYEM seeks to build an inter-generational network to find solutions to environmental challenges and confront the climate crisis. It focuses on bottom-up solutions and encourages the co-production of knowledge through participatory approaches.

Perk has recently been selected to take part in CIVICUS’s Youth Action Lab, a pilot co-creation initiative that works on year-long projects with grassroots youth activists based in the global south to support their movements and help them become more resilient and sustainable by building solidarity and networks, strengthening capacities, engaging with policy processes and facilitating resources to support their movement. 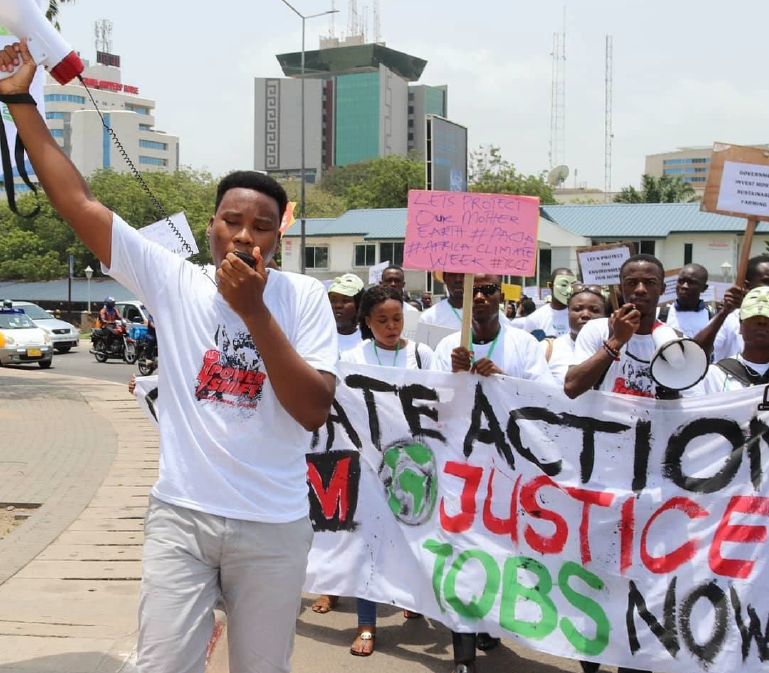 Can you tell us more about the work that you do?

My work is part of the broader work of GYEM, a leading youth-led grassroots movement in Ghana. GYEM works by organising and coordinating young people from different backgrounds and empowering them with the tools, techniques and technology to run disruptive campaigns on environmental issues. GYEM addresses key ecological challenges such as poor waste management, various forms of pollution, deforestation and the impacts of climate change in different communities and regions of Ghana. It specialises in running high-impact training for non-violent direct action (NVDA) campaigns, which target state actors and decision-makers from both the government and business sectors.

GYEM is composed of a youth-led Steering Group that mobilises logistics creatively, forging partnerships with other grassroots activists and community-based organisations to influence environmental change from the bottom up. It employs digital organising via social media and other NVDA tactics to deliver campaigns that challenge the status quo and offer both transformational and incremental community-led solutions that bring together scientific and Indigenous knowledge systems. GYEM also hosts the largest annual youth-led environmental summit in Ghana, Power Shift, which brings together grassroots activists from across the country to share ideas and collaborate on campaigns in various parts of Ghana.

We do much of our work in collaboration with several other organisations, including Rocha Ghana, an environmental civil society organisation (CSO) focusing on practical conservation interventions in important ecological habitats and improving the ability of target communities to adapt to current trends in climate change; the Green Africa Youth Organisation, a youth-led gender-balanced advocacy group that focuses on environmental sustainability and community development; 350 Ghana, a leading environmental grassroots CSO affiliated to 350.org, aimed at mobilising and empowering young people in partnership with key stakeholders to champion the need to reduce our carbon emissions and promote renewable energy systems; and WaterAid Ghana, a CSO focused on providing people with clean water, decent toilets and sanitation.

I am based in Accra, Ghana’s capital, but I work with diverse communities in different locations depending on the environmental challenge being addressed. Some of these include low-income groups who reside in informal settlements and are disproportionately affected by the impacts of plastic pollution and flooding. Another group I work with are frontline communities who face the impacts of climate change, such as drought, water stress and food insecurity. I also work in high schools and university campuses with student volunteers, aged between 12 and 25, who are passionate about the environment and require training and capacity to take action. Finally, I engage with CSOs working on various Sustainable Development Goals nationwide. Most of these are youth groups with leaders and members between 18 and 35 years old, working on initiatives and projects in areas such as conservation, plastic recycling, water, sanitation and hygiene (WASH) and climate mitigation and adaptation.

What have been the biggest successes you have achieved?

We have had several high-profile victories. In 2016, the government backtracked on a project, proposed in 2013, to build a coal-powered plant in a community called Ekumfi Aboano. The plant was going to pose health and environmental risks to the people there, and especially to children and women. We designed campaign messages, organised the community for NVDA and marched repeatedly. As a result, the government engaged GYEM in a discussion and halted the coal plant project in 2016.

Secondly, in 2016, WaterAid Ghana approached GYEM in search of support to create awareness of WASH-based climate adaptation interventions. They wanted young people to design a campaign to draw the government’s attention to WASH issues in local communities and informal settlements, and tackle them as part of adapting to climate change. I contributed with my design work and communication strategies to a year-long campaign that reached more than 10,000 young people. This resulted in the National WASH Forum, which brought together local communities and political actors to work jointly towards the goal of addressing WASH problems as part of climate adaptation strategies.

In 2018, I worked with other activists in an urban poor settlement in an area called Pokuase, to raise awareness about a water source in the community that was being threatened by road construction and other building work. This water source was vital because it served the community during the dry season. For the first time, attention was drawn to the impact of human activities on the river.

Did you take part in the global climate mobilisations in 2019?

Yes, in late 2019 I championed the first #FridaysforFuture and #SchoolClimateStrike campaigns in the northern region of Ghana. I organised and coordinated strikes in Damongo and Tamale. I designed creative graphics and campaign materials, which attracted more than 200 schoolchildren and young people to these global campaigns. This was important because it was the first time that children and young people in that part of Ghana came out in large numbers to raise their voice on the impacts of climate change and demand urgent action from their leaders. Northern Ghana is currently experiencing the worst impact of climate change in the form of droughts and food insecurity.

Ours was one of the many #FridaysforFuture events that were held in Ghana. I think we’ve been successful in mobilising because we’ve used innovative approaches. Personally, I’ve used my skills in design thinking and graphic design and my expertise in non-violent communication and direct action. I communicate to reach my target on various social media platforms, while also mobilising communities for action on the ground with context-relevant messages to address specific environmental challenges.

Before that, in March 2019, I helped bring together hundreds of grassroots activists from Ghana and activists from the International Youth Climate Movement from other parts of Africa, to campaign for climate justice and urgent climate action, during the United Nations (UN) Africa Climate Week. I think this has been so far the most important achievement of my work as an activist. This high-profile conference was hosted in Accra and was attended by African governments, international organisations and business leaders. During this week, I coordinated an NVDA training session for hundreds of young people, while leading a mass rally of about 300 activists to the summit venue to deliver a strong message to heads of governments, businesses and stakeholders of the UN Framework Convention on Climate Change to act on the climate emergency.

I consider this as an important achievement because as a grassroots activist in Ghana, this was the first time I gained a strong personal conviction that my work in the little corner of my community has a potential to cause change at the top, if supported with the right tools, capacity and resources.

Personally, my work is self-financed. I use some income from my part-time self-employment as a graphic designer to support my activism. I design marketing materials for individuals and campaign banners for CSOs and get paid for it. I use a percentage of this to fund my work. Sometimes, family and friends also donate to support my work if I make a request. I have also financed my work through crowdfunding to help coordinate and implement projects and high-profile campaigns. So one area in which activists like me need support is in generating sustainable resources.

We also need more opportunities to connect and network with other activists from the global south who may share similar solutions to particular challenges in their respective contexts, to interact with multiple actors and to learn to navigate complex policy processes in the areas in which we work.

Civic space in Ghana is rated as ‘narrowed’ by the CIVICUS Monitor.
Get in touch with the Ghana Youth Environmental Movement through its Facebook page and blog, and follow @gyemgh on Twitter.

CIVICUS speaks about the political situation in Pakistan since the removal of its Prime Minister Imran...