BOLIVIA: ‘We empower young people so they can lead the climate movement’ 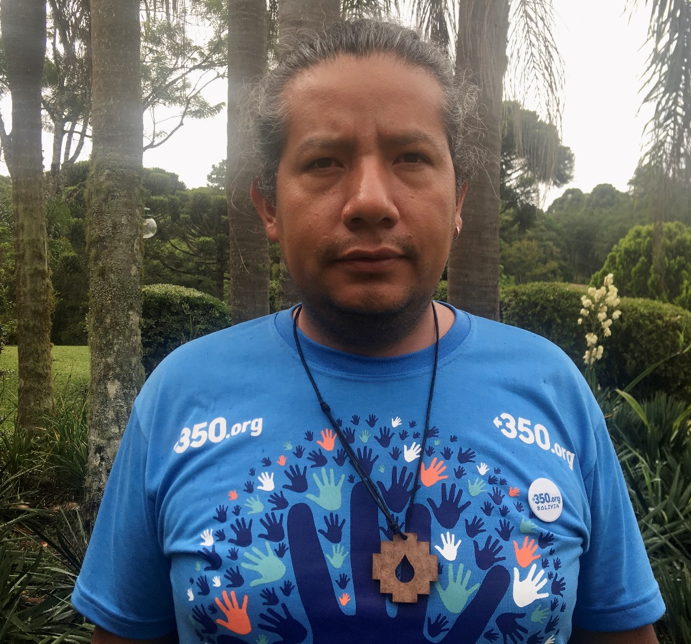 Following a year marked by massive mobilisation on the climate emergency, CIVICUS is interviewing civil society activists, leaders and experts about the main environmental challenges they face in their contexts and the actions they are taking. CIVICUS speaks with Rodrigo Meruvia, general coordinator and researcher of the Gaia Pacha Foundation, a civil society organisation (CSO) dedicated to environmental protection and conservation. Based in Cochabamba, Bolivia, Gaia Pacha undertakes research, extension and development initiatives on the basis of cooperation with other CSOs, universities, research centres, government agencies and private companies.

What is the main environmental problem in the context where you work?

The central issue is climate change, a planetary phenomenon that is having impacts at all levels, on populations and their productive and food systems, and that exceeds local and institutional capacities. Among other things, this phenomenon is reflected in an increase in the frequency and magnitude of climatic events and the depth of their impacts.

We work with the aim of increasing the resilience of rural communities in the face of climate change, as well as building awareness among the urban population regarding the ways in which their consumption patterns affect the development prospects of many communities in rural areas. First of all we work to show how climate change impacts on areas of small family subsistence production and create mechanisms to help increase their resilience to climate change. We also work to empower young people both in rural communities and cities. We train them in technical issues as well as in matters of strategy and leadership, so that they can produce initiatives and generate alternatives on topics such as deforestation or greenhouse gas emission. We encourage them to generate projects applicable to their immediate surroundings and we foster networks and bridges with other civil society and academic organisations to support the implementation of their initiatives.

For example, at the moment we are working with universities in Cochabamba on the subject of alternative transportation, with the aim of establishing bike paths between the various university campuses within the city, so that young people can use bicycles as an emission-free and safe means of transportation. With that aim in mind, mobile phone apps are being developed that will indicate the safest routes, and parking lots for bicycles are being established, among other things. Work is also being done to educate car drivers, in partnership with the university and in a joint initiative with the municipality and some private companies that are interested in this issue.

Were there climate mobilisations in Bolivia during 2019?

Yes, in September, when the global climate mobilisations were held, major Bolivian cities joined as well. In Cochabamba, we provide support to the youth movement, providing them with resources so that they can lead the climate movement. We provide them with logistical and institutional support, which is needed because there is still a lack of trust in young people in our cities. We propel them without becoming the spokespeople for the movement. We provide training on a variety of topics and transmit the fundamentals and basic concepts to them so that they can account for the reasons for their mobilisation rather than just go to a march armed with a single slogan. The idea is for them to become the disseminators of accurate information regarding both the causes and local effects of global climate change.

With that aim we held several workshops targeted at young people. We trained about 100 young people directly, and indirectly we have reached around 1,400.

Did climate mobilisations in Bolivia echo global demands, or did demands have specific local components?

Demonstrations in Bolivia expressed demands related mainly to the forest fires that come hand in hand with the expansion of the agricultural frontier. Their main demand was the repeal of domestic laws that benefit agribusiness and neglect the protection of forests.

Bolivian laws do not protect forests, but rather the opposite. In mid-2019, just a few months before 2019’s great forest fires, the government enacted decree 3973, which authorised clearance for agricultural activities in private and community lands in the departments of Beni and Santa Cruz, and allowed controlled fires. In other words, the law gives free rein to any owner interested in expanding their production space, whether for livestock or agriculture. Unfortunately, this has been the position of the state so far, and in our experience whether there were leftist or right-wing governments in place has not made any difference. Beyond the party ideology of the incumbent government, there’s the interests of the agribusiness sector, which are much more permanent and broader, since they involve not only local actors but also transnational companies.

We believe that the cause of the fires is primarily human in origin, since they are started to expand the agricultural frontier. This is how about five and a half million hectares have already been burned. To give an idea of​​the dimensions of the disaster: the area that has been burned in the lowlands of Bolivia is almost the same size as Guatemala. And not only the forest is lost, but also the entire habitat is degraded, the water sources of some communities disappear and the effects of this extend beyond Bolivia, as bioclimates and rainfall change.

We understand that the phenomenon that affects us is part of a bigger problem, which this year had several expressions in the form of fires in the Brazilian Amazon, in African countries and in Australia. As there is insufficient rainfall due to climate change, forests are much more prone to burning. In addition to agricultural expansion policies, especially those aimed at growing soybeans – which in addition are genetically modified – this makes these places much more vulnerable. The consequences of this are suffered not only by the population living in the territories where these incidents occur, which is directly affected, but also by the general population.

At the same time, we also put forward the issue of urban deforestation. In Cochabamba there are around 200 deaths per year due to respiratory problems. It is one of the cities with the most polluted air in Latin America, so this was also one of the specific demands of our mobilisations, as well as the fact that we adhere to the global call for definitive and effective action by governments.

Have you had participated in international processes related to climate change?

We have participated from the local level, training young people to take part in the international negotiation processes, mainly at the COP – Conference of the Signatory Parties to the United Nations Framework Convention on Climate Change – series of meetings.

We started by recruiting in various institutions that work with young people, and making a diagnosis to identify who were the ones who were ready and committed to addressing the issue of climate change, and then we made selections based on the issues we were working on. We gave workshops on topics ranging from the conceptual and technical approach to the issue of climate change, to the management of environmental projects, the characteristics of the negotiation process and strategies to participate, as well as workshops to improve people’s ability to express themselves adequately at these events. It was a long process, but it yielded very good results, because we already have leaders in the country’s nine departments who are trained to go participate in discussions and show the world the initiatives and projects that are being developed in Bolivia.

Unfortunately, the last-minute change of the venue for COP 25 to Spain – because it could not take place in Santiago de Chile due to the context of protests and repression – deflated us, because we were well prepared and had a firm position that in the end we could not contribute to the event. This was the case not just for us in Bolivia, but more generally for Latin America, where something very big was being prepared to share in Chile. The change of location and the short notice with which it was decided created a big complication for us, financially and logistically. On top of this, for us in Bolivia the consequences of recent socio-political conflicts also were an obstacle that prevented us from implementing our strategy before COP 25.

But we do not want to throw away the existing motivation and the accumulated work that we have done over approximately one and a half years, so we have continued to work to train young leaders. Our goal is to underpin the ability of young people to generate proposals and initiatives, both technically and politically, not only in their regions but also in international spaces.

Do you think that the disappointing outcomes of COP 25 had something to do with the absence of many people who were ready to influence the agenda but could not participate?

Yes, I think so. Without detracting from the work done by the countries and organisations that did participate, I think it ended up being a very improvised event, and if it had been held in Chile as planned, the results could have been a bit more significant and positive thanks to the presence and the participation of young people. For the first time, Bolivia was going to count on the participation of a group of young people recognised by the state, who were to carry out the mandate of a collective process developed in Bolivia’s nine departments through four or five prior forums.

However, we are trying to have a constructive attitude in the face of this setback, and we are taking advantage of the extra time we have to get ready. We already have these young people who are in a position to formulate demands and proposals wherever it might be necessary to do so – be it in the UK, where COP 26 will be held, or in any other international event if the opportunity arises.

Civic space in Bolivia is rated as ‘obstructed’ by the CIVICUS Monitor.