CLIMATE STRIKES: ‘We take risks because there is no security without a future’

CIVICUS speaks to Arshak Makichyan, a Russian violin student at the Moscow Conservatory who started weekly climate strikes on 15 March 2019. Arshak, who has played violin since the age of seven, had planned to continue his musical studies in Berlin, but has now decided to stay in Moscow to continue his weekly climate strikes. He has since been joined by students who started their own strikes in other Russian cities and found international support, including through the #letrussiastrikeforclimate campaign. 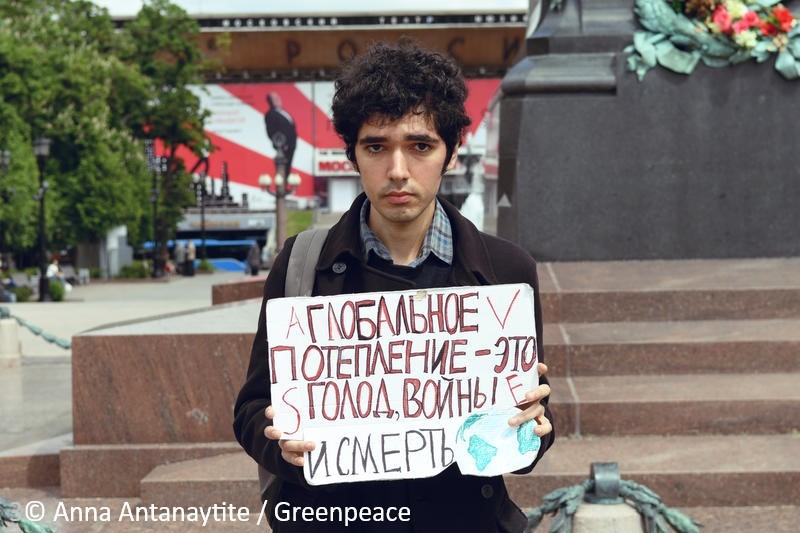 What initially inspired you to start striking for climate?

It is strange that I learned about the climate crisis from Greta Thunberg. I am grateful to her for that. It is better to know the truth and fight than to live in ignorance. It was not inspiration. It was hopelessness that made me take action. It was a difficult decision, but I knew I had nothing to lose.

The first weeks I was very afraid and felt a little silly, as people couldn't understand what I was doing. I had no support in Russia, but people around the world on Twitter were supporting me and that was something. I chose to stand in Pushkin Square, because a week before I'd seen other strikes there, with demands to stop the war with Ukraine, and I thought that it's more possible to influence people in Russia than it is to influence the government. And on top of that, Pushkin is a symbol of freedom in Russia.

Public protest in Russia is highly restricted. Are people surprised to see you in the streets? What have been their reactions?

It’s been 21 weeks and thousands of people have come by. Now people seem to be more understanding, but at the same time protest has become more dangerous.

On my strikes I get many different kinds of reactions from people. Some express their support and take pictures, but some accuse me of being a spy from the USA or some other country. After one of my first interviews, police came and asked how much I was being paid. A few weeks ago, a person threatened to stab me if I didn’t put down my poster and then stayed around, calmly waiting, even after I called the police. And the police couldn't, or rather wouldn’t, arrest him, even though I have a video. But even so, something good came out of that: it was a reason for independent Russian media to write about Fridays for Future.

Organising mass strikes is also very difficult. Usually the government refuses to authorise them without even providing a reason or only allows you to strike in places where not so many people can see your protest. They refused my two applications in July, then I wrote again saying that if they refused the next one we would do single strikes every day, so they called me and offered a place that was not so bad, even though it was not the place that we wanted.

But despite the challenges, we are not going to give up. Activism may not work fast enough, but it does work.

The student climate strikes are unique in that often they involve a single person protesting. How does it feel to protest alone or in small groups? Is it easier knowing other people in other countries are doing the same?

Yes, it's easier when you know that you have millions of people behind you. The first weeks were the most difficult, because I did not have such support and felt a little silly by myself. Now I have that support, even in Russia, but it is also a very big responsibility. There is more and more responsibility and there is no way back for us. The world now knows that in Russia we are fighting, so that they have hope. We increase the power of protests by taking risks. And we will continue to do so, because there is no security without a future.

How has digital organising helped your campaign, and have there also been online attacks?

There are a lot of strange and dirty things online, such as trolls, false information and propaganda. But it's not so bad, because the internet also helps us. Support and communication on the internet have been very important to us.

An anonymous Telegram channel recently shared the data of 3,000 people, including mine, and I had a very uncomfortable feeling. I felt there was less security and greater danger. But I'm not afraid of them and I'm going to continue and strike to the end with my new friends in Russia and around the world.

What's scarier for me, even more than trolling and threats, is the indifference of most people.

Since you started striking, the climate emergency has become more serious. Heatwaves have spread across Europe and even Siberia caught fire. Have you noticed any changes in how people react to your protest?

It seems to me that in a few years there will be no point in going on strikes. Young people will have to solve real problems, because humanity is not ready for a crisis.

Civic space in Russia is rated as ‘repressed’ by the CIVICUS Monitor.

PORTUGUESE  CIVICUS discusses the state of environmental activism in Brazil with Daniela Silva, a...

CIVICUS speaks with Ellie Hooper of GreenpeaceAotearoa about civil society’s role in the ongoing...