SRI LANKA: ‘People are scared of expressing themselves freely’ 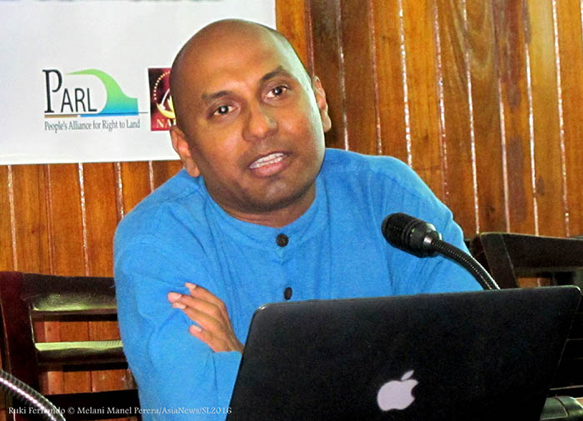 In April 2019, more than 250 people were killed and hundreds injured in a terror attack in Sri Lanka that targeted three churches and three hotels. The following day, an emergency law came into effect, giving the police extensive powers to detain and interrogate suspects without court orders. Over a hundred people are reportedly being held in custody in connection with the attacks. Since the attacks, civil society has reported a discriminatory ban on face veils, a spate of attacks against Muslim-owned businesses, mosques and houses in several parts of Sri Lanka and displacement, arrests and reprisals against refugees and asylum-seekers.

The following month, May 2019, marked a decade since the end of Sri Lanka’s brutal armed conflict. According to civil society groups, the government has failed to provide justice for the conflict’s many victims. The Office on Missing Persons and the Office for Reparations were established following delays, but neither is fully functioning. There has been no progress on establishing a war crimes tribunal with international involvement.

How do you access the quality of democracy in Sri Lanka today?

We are heading for another crisis in democracy. I think very good indicators of democracy are how minorities are treated and how dissent is treated. We can see the gradual erosion of the way minorities are being treated in Sri Lanka, both ethnic and religious minorities. And more recently after the Easter Sunday bombings, we have seen a lot of hostility towards the Muslim population. A lot of the arrests were of people who later turned out to be innocent but who were detained on suspicion simply because they are Muslims. And there have also been reprisal attacks directed against the Muslim community.

At the same time, we have seen a crackdown on the freedoms of peaceful assembly and expression. For example, at the moment we have a writer, Shakthika Sathkumara, who is detained because of a story he wrote. We have other writers who have been threatened with arrests. We are seeing the misuse of laws that supposedly exist to protect human rights, notably the International Covenant on Civil and Political Rights (ICCPR) Act.

What has been the effect of the political and constitutional crisis that occurred in late 2018 between the president and prime minister?

The relationship between the president and the prime minister has become much worse since the end of the constitutional crisis in 2018 and I think this has very negatively affected the ability of the government to protect and ensure the security of its citizens. It seems the president and the prime minister are both accusing each other over who is responsible for the terror attacks and who was negligent.

What is the record of the current government in respecting and protecting fundamental rights of association, peaceful assembly and expression in Sri Lanka?

We have seen a large number of peaceful protests for rights by many groups such as students, farmers, families of disappeared people, people whose land is occupied by the military and people affected by the project such as landfills. In several of them, protesters have been attacked physically and people have been arrested and ill-treated in detention.

On the freedom of association, in 2018 the government tried to bring in an amendment to the existing laws that would enable them to exercise a lot of control and scrutiny over civil society organisations (CSOs) and other forms of civil formation, including civic movements, but due to outrage and criticism, this has since been withdrawn. Since then we’ve seen some alarming raids on the offices of human rights organisations, humanitarian organisations, particularly in the Northern Province (which was impacted on most severely by the conflict) in the last couple of months. The Easter Sunday attacks are being used as an excuse for these, but the real reasons could be attempts by the state, especially the security establishment, to exercise more scrutiny and control of civic mobilisation. These send a very alarming signal for the freedom of association.

What is the situation for civil society in Sri Lanka a decade after the end of the conflict in 2009? What are some of the challenges civil society continues to face?

I would say after the end of the war in 2009 there were two distinct phases. One is the dictatorial regime of the Rajapaksa family, which ended in 2014. During this time there was a very little space for the freedom of association and assembly. From 2015 onwards, we saw an increase in the space for the freedoms of association and peaceful assembly. However, the gains we made from 2015 and 2016 are being rolled back and there is an increasing crackdown.

Why is this rollback of human rights happening?

The promises of justice – whether its transitional justice, gender justice, economic justice or environmental justice have not materialised in the way that people expected them to, after 2015. There is frustration among a lot of communities and a large number of communities are agitating now. With the government unwilling or unable to address and provide redress and solutions to the people, they have turned increasingly repressive. This government we have right now is a coalition government. Prime Minister Ranil Wickremesinghe is linked to one major party, the Sri Lanka United National Party, and another section of the coalition is linked to the other major party, President Maithripala Sirisena's Sri Lanka Freedom Party. They have been in power together since 2015, and I think in 2015 there was a lot of hope that the parties had put aside their past repressive ways. However, I think those repressive ways are re-emerging, and it is not very surprising that these two parties, which have a history of repression, are resorting to it again.

Some activists and survivors continue to demand truth, justice and reparations for victims of the conflict. How far has this progressed?

Very little. I think we have seen some very minimal progress on truth processes in relation to some people who have disappeared. We have seen some progressive developments in a few cases and some truth being revealed in the courts through investigations, as well as a few people being arrested. However, just a couple of weeks back we saw the police personnel responsible being acquitted over the killing of a group of young people – the 'Trinco five' case – in 2006. So, although we have seen a few results of some investigations and some people being arrested, we have not seen convictions. We have not seen prosecutions in a majority of these cases. So there has been very slow progress.

How have the recent terrorist attacks affected the situation for civil society?

In the months prior to the Easter Sunday attacks, there was a campaign and momentum building up against the anti-terror laws in Sri Lanka. We have a very draconian law that has existed for over 40 years, the Prevention of Terrorism Act, and the government had proposed a replacement for that, the Counter-Terrorism Act, which is equally repressive. There was a campaign against these for several months, but now it’s become very difficult to press forward with this campaign because of the overwhelming public opinion that the law should be used against terrorists. And then immediately after the terror attacks the government brought in emergency legislation that imposes many restrictions on the freedoms of association, peaceful assembly and expression. Truthfully, we have seen a lot of repression using these various regulations in Sri Lanka. A lot of people are very scared now of expressing themselves freely. Many struggles for human rights and justice by affected communities, victim families and survivors of violations have been negatively affected in the aftermath of the Easter Sunday attacks.

We have seen an increase in the use of the ICCPR Act in recent months. Why is this the case?

The ICCPR Act must be used against the people responsible for provoking and creating violence against the different religious communities, particularly minorities religious communities. We have not seen that for more than a decade but suddenly we have seen the ICCPR Act being used against the people expressing themselves. I think the most visible example was of a women who wore a symbol depicting a ship’s helm, which was deemed to look like a Buddhist symbol, and she was arrested and detained. More worrying is the detention of writer Shakthika Sathkumara. One of the problems is that under this law there is no bail allowed. So, anyone who is arrested under the ICCPR Act can be detained for months and months.

What support does Sri Lankan civil society need from the international community and international CSOs to help build greater respect for human rights and democratic freedoms?

I think it is important to extend support in whatever way possible for those who continue to wage various struggles and to challenge the present government in terms of human rights and social justice on a wide range of issues. The focus of transitional justice needs to be broadened to encompass social justice issues, such as the rights of tea workers, who are campaigning for a minimum wage, something that is yet to be realised. There are a lot of other socioeconomic issues that Sri Lankan communities and activists have been advocating for through their protests, writings and national-level advocacy, but these should be supported internationally as well. International support for human rights and social justice should not be limited only to transitional justice, although that it is an important dimension.

Statement at the 50th Session of the UN Human Rights Council Item 3: Interactive dialogue with the...