HONG KONG: ‘We may have not achieved our demands yet, but we've built solidarity’ 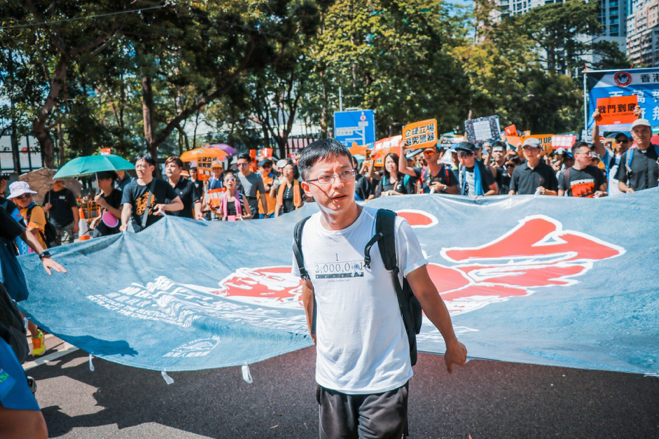 Millions of people took to the streets of Hong Kong in June 2019 to protest against a proposed Extradition Bill that would have allowed the government to send people, including foreigners, to face trial in mainland China, in courts controlled by the Communist Party. Many in Hong Kong see this proposal as eroding the special freedoms afforded to them under the ‘One Country, Two Systems’ model, established prior to Hong Kong's handover from British to Chinese rule in 1997. CIVICUS speaks to Wong Yik-mo, vice convener of the Civil Human Rights Front, an umbrella body of Hong Kong’s pro-democracy groups, which has been among the organisers of the mass protests against the Extradition Bill.

What has driven the mass protests over the past few weeks? What are your demands?

The protests were part of a campaign to demand that the government withdraw the so-called Extradition Bill, which would amend the Fugitives Offenders Ordinance Bill to allow individuals, including foreigners, to be sent to mainland China to face trial in courts controlled by the Communist Party. This is clearly a direct threat to the rule of law in Hong Kong.

The first march took place on 31 March 2019 and included only 12,000 protesters. We held five demonstrations in total, the biggest of which brought out one million people to the streets on 9 June and two million on 16 June.

During the demonstration held on 12 June, tens of thousands of protesters assembled around the Legislative Council of the Hong Kong Special Administrative Region building and its nearby roads. The police used beanbag rounds, rubber bullets, pepper spray and batons on overwhelmingly peaceful protesters, leaving dozens injured.

As things developed, we added new demands to the original one, which was focused basically on the withdrawal of the Extradition Bill. We are now also demanding the dropping of all charges against protesters and the retractation of the characterisation of the 12 June protest as a ‘riot’, an independent investigation into the abuses of power committed by the police during the 12 June protest, the resignation of Hong Kong’s Chief Executive Carrie Lam and free elections.

What were the tactics used to organise and mobilise the protests?

The Civil Human Rights Front has organised demonstrations the ‘traditional’ way, that is, by notifying the police and advertising our plans beforehand. But many other protesters, such as those surrounding the Police Headquarters, organised and mobilised through the internet. They did it very smartly and were able to mobilise without leaders. It happens often that netizens discuss strategies online and when some good ideas come up, people echo and support them, and that is how tactics are chosen. People then know what to do, without the need for clear instructions.

How have the government and the police responded to the protests?

The government did not respond to our demands at all! Even after one million people took to the streets on 9 June the government announced that the second reading of the bill would continue as scheduled. On 12 June, protesters tried to stop the second reading by surrounding the Legislative Council, mostly in a peaceful way. The police however used excessive force against protesters: they fired teargas canisters at them, causing some of their clothes to be burnt. Ten canisters were fired at the protest area designated by Civil Human Rights Front, without any warning. When canisters landed in the middle of the crowds, they caused panic and nearly resulted in a stampede. Rubber bullets were also fired at the heads or faces of protesters, and bean bag rounds were also used.

The police also targeted the press and fired teargas at first-aid stations where about 100 injured protesters had found refuge. In an effort to justify all this, the 12 June protests were subsequently referred to as ‘riots’ by the police and Chief Executive Carrie Lam.

Do you think you have achieved anything so far and what are your next steps?

Despite the fact that many protesters were injured, and some even decided to end their lives, the fact remains that two million people – more than a quarter of our population – took to the streets. The Chief Executive had to announce the ‘suspension’ of the bill. Although that was not the full withdrawal we demanded and we continue to fight for, that’s what we have achieved so far. And more importantly, we have built solidarity.

From the 2014 Occupy Movement we learned that we should not blame each other, even if we tend to use different means of protest, such as peaceful demonstrations or some tactics such as storming buildings. In the course of the current campaign we have come to admit that all the protesters love Hong Kong, and that only by recognising each other’s effort can we be strong enough to fight against the government.

What is the situation of the civic freedoms of association, peaceful assembly and expression in Hong Kong? What is the likelihood of Hong Kong maintaining its own space distinct from China’s?

The freedom of expression is shrinking. In schools and universities, speech is censored. Academic institutions claim to be ‘neutral’ and non-political, but apparently just criticising the government can get you in trouble. Candidates for the Legislative Council have been barred from running just for expressing their political views, even on social media posts.

International best practice on the freedom of peaceful assembly is that notification should be provided to the police when protests are planned, for administrative reasons such as arrangements regarding traffic. In Hong Kong, however, one needs to obtain a Letter of No Objection in order to ensure that a protest is deemed ‘legal’. The police even have the right to issue a Letter of Objection, forcing protest organisers to require an authorisation rather than merely providing notification.

What support do activists in Hong Kong need from the international community and international civil society to help build greater respect for human rights and democratic freedoms?

We need the world to understand the special status of Hong Kong and create awareness globally, that we do not enjoy fundamental freedoms like we used to, and we don’t have democracy, unlike what most people would think.

Many governments have criticised China’s human rights record when handling regions like Tibet and Xinjiang, and Hong Kong deserves the same level of attention. We urge the international community to put pressure on China to make sure that Hong Kong gets back its freedoms and its democracy is protected, as stipulated in its Basic Law. Foreign governments should also take into consideration Hong Kong’s special status as the bridge between the free world and China. If one day Hong Kong becomes just like China, and its rule of law is completely destroyed, then communication between the west and China would become even more difficult.

Get in touch with Civil Human Rights Front through their Facebook page.

CIVICUS speaks to Aparajita Sangita, a Bangladeshi human rights activist and an international...

CIVICUS speaks about the recent right-wing shift in Slovenia with Brankica Petković, a researcher and...