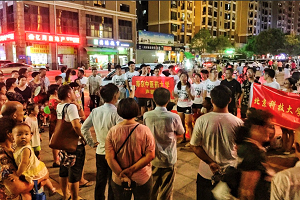 In July 2018, police in Shenzhen in Guangdong Province, China detained and used physical violence against several workers at Jasic Technology, a welding equipment manufacturer, after they attempted to form an autonomous union under the auspices of the All-China Federation of Trade Unions (ACFTU), the sole legal vehicle for workers’ rights in China. The workers had long complained about low wages, poor working conditions and management abuses.

After learning about the arrests on social media, dozens of concerned college students and activists went to Shenzen to protest against the arrests, only to be detained. Other students from at least 10 universities then mobilised in support of the workers and formed the Jasic Workers Solidarity Group (JSWG). Many members of JSWG belong to student-run Marxist societies. Since then, scores of student activists and others have been detained in waves of arrests. Over 40 workers, students and activists are reportedly still in detention. Some were put in “residential surveillance at a designated location,” a form of secret incommunicado detention that enables the police to hold people outside the formal detention system for up to six months without access to legal counsel or family members. University officials across China have also harassed students, preventing them from holding meetings and participating in protests.

CIVICUS speaks to Michael Ma from Students and Scholars Against Corporate Misbehaviour (SACOM), a civil society organisation founded in 2005 by a group of students and scholars in Hong Kong. SACOM monitors and publicises the misconduct of multinational corporations through first-hand investigations in supplier factories.

Can you provide some background on the Jasic labour struggle and the response from the authorities?

The whole struggle started with demands of a group of Jasic workers to form a union under the legal framework of the ACFTU. It later developed into a solidarity movement of students for workers that is demanding the legal right of workers to unionise and the release of labour and student activists who have been arrested because of their demands. The Chinese authorities have arrested activists in waves. Activists have been detained in unknown locations for many months and forced to “confess.” The authorities then use these “confession videos” to threaten other student activists who are still in school to try to make them drop out from the struggle.

What is the environment currently like for the expression of dissent in China? Do you see this crackdown as part of a wider pattern of state repression or is this something new?

Undoubtedly the space is shrinking. In our opinion, the crackdown of the Jasic struggle and the arrest of the labour activists highlight that the government is trying its utmost to eliminate any uncertainty or unrest during the economic downturn of China. Chinese manufacturing has been facing a lot of challenges as production costs have been increasing, particularly in the coastal areas. Giant manufacturers have been moving their production bases to either inland China or Southeast Asia due to their cheaper production costs. Those that remain in China, particularly in coastal China, including Jasic, are struggling because of strong competition. The situation has worsened due to the China-USA trade war happening since 2018.

As early as 2016, Lou Jiwei, the former finance minister of China, has repeatedly and openly claimed that rising wage levels in China are a problem. It is then easy to understand why strong labour activism that can consolidate the power of the large working class and students in China is not something the government wants to see, either politically or economically.

How many labour activists and students are still detained or being prosecuted, and what is their situation? What is SACOM doing for them?

There are at least 44 people who continue to be detained: nine university students, 15 graduates from various universities, nine workers and 11 others. SACOM's role in this struggle is mostly to promote international solidarity actions and make information about them known.

What steps have the Chinese authorities taken to silence other students supporting this struggle?

Basically, student groups that are doing labour organising in universities such as Beijing Language and Culture University, Nanjing University and Renmin University have been facing intense suppression and surveillance over the past eight months. Many of these groups have been forced to shut down or reform under the threat of being replaced by pro-government students. Student activists have been repeatedly warned and threatened. Students have been forced to watch the “confession videos” of arrested activists. One student activist was expelled because of the issue.

In November 2018, Chinese security officials took away at least nine students in Beijing, Guangzhou and Shenzhen, including at least five students or recent graduates of Peking University, the country’s top institution. Peking University also sent a message to all students accusing JWSG of “criminal activity.” With every reprisal, the strength of the group wanes.

The university authorities of Beijing Language and Culture University, Nanjing University and Renmin University all forcibly closed their Marxist Societies. Meanwhile, these universities have been constantly placing under surveillance and repressing Marxist students who speak out online for the detained Jasic activists and campus workers.

What can the international community and international CSOs do to highlight the case, and more generally to support civil society in China?

The arrested workers and students are definitely struggling under great pressure and are very likely facing cruel treatment to force them to “confess.” They are also likely to be imprisoned for a long period of time. There are two types of work we can do to support these brave activists. For organisations, including trade unions and academic units, that have institutional connections with the Chinese authorities or Chinese universities that are involved in the Jasic struggle, it is important to pressure these Chinese entities through institutional channels.

They should demand that these Chinese entities explain what is going on and what their role is in the struggle. The suspension of the exchange programme between Cornell University in the USA and Renmin University is definitely a positive step that can help pressure Renmin University to be aware of what it is doing towards its students.

For other activists and civil society organisations, your continuous voice and concern about the issue is also crucial to ensure international pressure on the Chinese government. There will be upcoming petitions and international protests and actions held in different regions to demand the release of the activists. All of you are encouraged to join or organise your own actions.

CIVICUS speaks with Benedicta Chisom about the current student mobilisation that is calling on...

CIVICUS speaks with Olorunfemi Adeyeye about the current student mobilisation that is calling on...