VENEZUELA: ‘Venezuelans are not emigrating in search for better opportunities, but to save their lives’ 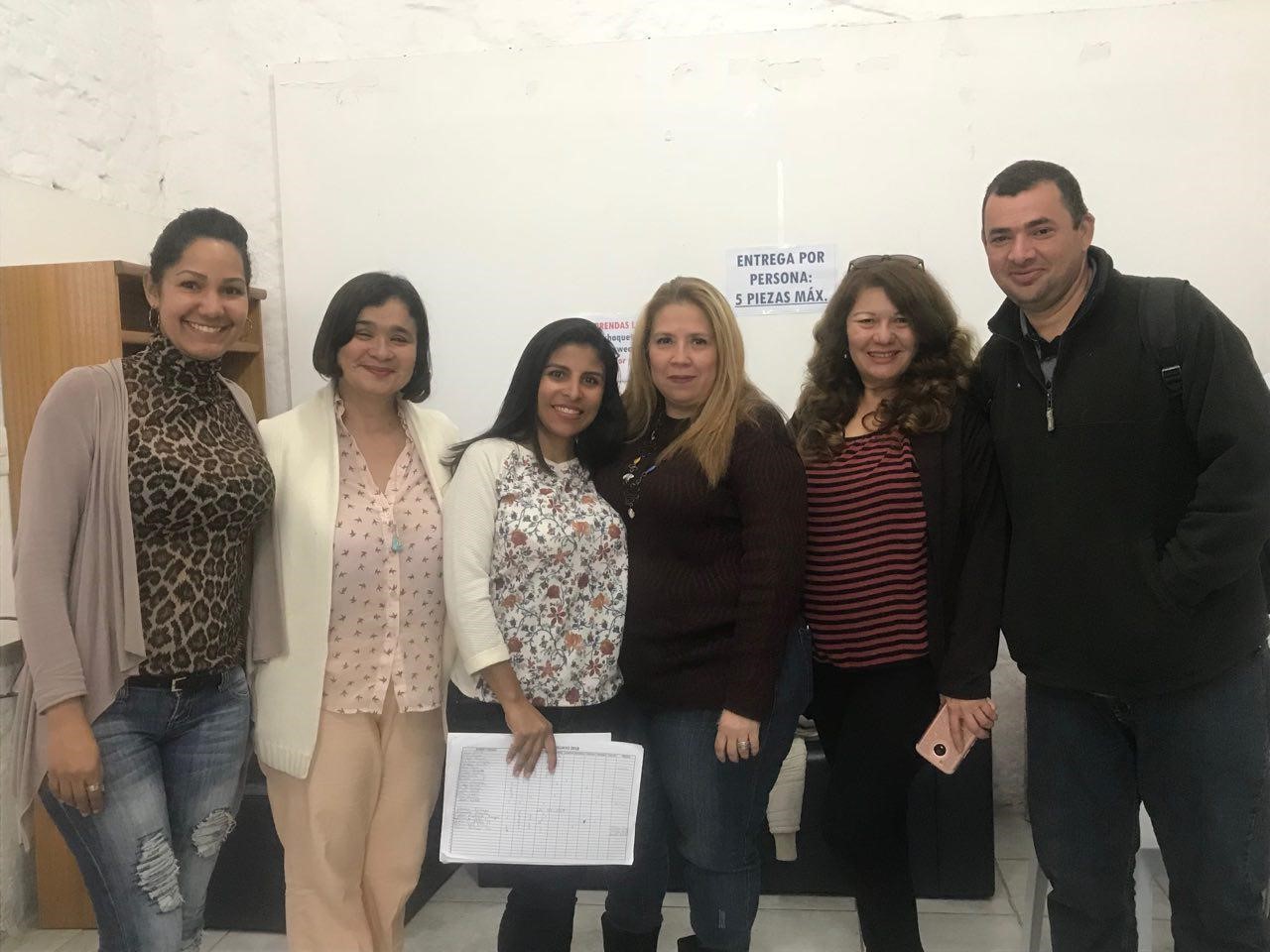 of Manos Veneguayas. Based in Montevideo, Uruguay, Manos Veneguayas is a civil society organisation (CSO) run by Venezuelans that offers support to Venezuelans arriving in Uruguay. It works in alliance with other organisations and with the contributions of Uruguayan citizens and Venezuelans living in Uruguay. Since 2014, 2.3 million Venezuelans have fled their country, escaping from political repression, scarcity of food and medicines, street violence and a lack of opportunities. While some countries in Latin America have rejected Venezuelans at their borders, others – notably Uruguay and other Mercosur member states – have maintained an open-doors policy. More than 8,000 Venezuelans have now become legal residents in Uruguay.

How do you see the situation in Venezuela, and how is it driving migration?

I think the situation in my country is critical: literally, people are starving to death. Malnutrition has increased; there are more and more cases of children who are nothing but skin and bones. Older people are dying, and children in hospitals are dying as a result of completely preventable infections, just because hospitals are contaminated. I see a very tough future. It will be difficult for this generation that is growing up in Venezuela today to have the strength to push the country forward.

It is no secret to anyone that Venezuelans are not migrating in search of better opportunities; they are migrating to save their lives. From 2014 to the present, the quality of life in Venezuela has deteriorated to unimaginable levels. For those of us who still have families there, this is very hard. When you are at home at night and the telephone rings, your heart stops. You always fear that call in which you will be told that so-and-so died, or so-and-so has been killed.

Instead of trying to get other countries to open their arms to receive a massive influx of migrants from Venezuela, something needs to be done to change the situation that is causing people to flee their country. But in the meantime, we at Manos Veneguayas are trying to help Venezuelans arriving in Uruguay.

How does your organisation help?

Since November 2016, Manos Veneguayas has been active as a support organisation for Venezuelan migrants in Uruguay. We are a team of nine founders and nearly 40 volunteers. We have autonomy in our decision-making, but we receive support from other organisations. Two long-established CSOs, the Instituto de Estudios Cívicos (IEC) and Idas y Vueltas, help us. IEC lends us their headquarters and supports us at each event we organise. With Idas y Vueltas we have learned to work together. They continue to work on supporting all migrants more generally, while we focus on Venezuelans. Of course, although we are an organisation of Venezuelans working for Venezuelans, we serve all migrants who arrive at our doors looking for a helping hand. We do not deny anyone our help.

Initially our idea was to provide emotional support. People were arriving who ignored lots of important things about this country, such as that summers are hot and winters are cold. They had no idea what it is like to live in a country with four seasons. Newcomers did not even know how to dress for the low temperatures or how to protect themselves from the sun, and they often did not have the right clothes either. Many had arrived with nothing, so we collected and distributed necessities such as warm clothing.

The initial idea was to help newcomers adapt to Uruguay, so that they felt that they were not alone throughout the migration process. As the main urgency for new arrivals is to get a job, the first thing we did was create a jobs bank, which we named Clasificados Veneguayos.

At first, we tired ourselves out hunting for job offers online, but we soon got lucky when at one of our first job fairs a newspaper did a great interview with us, which was widely disseminated, putting Manos Veneguayas on the radar of many businesspeople. After that, offers began arriving directly to us, and we now have a database with hundreds of resumes that we provide to potential employers. And while many people come to us with requests for domestic help, we try to get people jobs within their professional areas of expertise. But our priority is to make sure that at least one member of each household receives an income, and we think that all jobs dignify. We give talks so that newcomers learn about their rights regarding healthcare and work, and we help them prepare a resume or get ready for a job interview. We also provide them with support so that they can obtain their legal papers.

We have done a survey, mostly through Facebook, to better understand the needs of Venezuelans arriving in Uruguay. For those who are arriving right now, housing is an additional problem on top of finding work. Increasing despair is causing whole family groups to leave Venezuela, making the process all the more difficult. In the past, the head of the family, usually a man, often came first, stayed in a residence and focused on working, so three or four months later they would be able to provide the required deposit to rent a small apartment so that he could bring his wife along to work, and eventually rent a bigger place together. But now it’s families of four or five people arriving, and residences and even rental rooms are out of their reach. Legally, rental collaterals can only be obtained after being employed for a minimum of three months. Otherwise, you need to pay a lot of money up front, and in the case of recent Venezuelan migrants, if I told you that one per cent are bringing a sizeable amount of money, it would be an exaggeration. Shelters are overflowing because not only are Venezuelans currently arriving, but also Cubans and Dominicans.

The Venezuelan exodus has sparked some cases of discrimination and xenophobia in the region. Have you experienced this in Uruguay?

A sociologist who I spoke to recently told me about some cases. But I think they have been isolated cases. I have been in Uruguay for four years and I have not personally seen any kind of discrimination based on skin colour or nationality.

Of course, there are people who think that Venezuelans are coming to take job opportunities from Uruguayans. But that is obviously not true: there is simply a range of offers that fit some people and not others. While there are many Venezuelan professionals working as Uber drivers, waiters, vendors and delivery people, there are also professionals employed within their area of expertise: nurses, physiotherapists, engineers, even some architects who have been able to validate their college degrees. In fact, the migration of Venezuelan professionals has been very important for Uruguay, since it has allowed the country to tap into a high-quality pool of professionals while not investing a cent in their training.

We know that as far as migrants are concerned, it is common for the reputation of the whole national group to be put into question as a result of the actions of just a few individuals. If one Venezuelan makes a mistake, it will be said that all Venezuelans are dishonest or unreliable. Therefore, we are very careful in helping people prepare to find a job. When people arrive and tell us that they are desperate and want a job no matter what, we ask them to identify their own limits, because they need to commit to whatever job they get; they cannot stay in a job for two weeks and then leave. Something similar happens with the rhythm of things. In Venezuela, if you stand still you risk being ran over. In Uruguay, everything happens more slowly, and Venezuelans are not used to it. So we try to calm down all those young people who come here with this attitude of wanting to swallow the whole world, because in Venezuela they were eating air. We need to calm them down and show them that this is a wonderful country that has opened its doors to us, but that we also need to move at its pace.

Do you think Venezuelan migrants are here for good, or do they plan to return to Venezuela some day?

This is one of the things we always discuss among ourselves. There are some who consider that their life is here now, and they are here to stay, but a high proportion of us are of the view that we are here to learn, because our plan is to go back and help rebuild our country. I want to go back, and I believe most people think that this is just temporary, that our country is going to move forward and will eventually need us. In the meantime, the best we can do is try to leave a deep mark in this country that has hosted us, so that tomorrow they can say that Venezuelans have indeed played their part.

Civic space in Venezuela is rated as ‘repressed’ by the CIVICUS Monitor.

Get in touch with Manos Veneguayas through its Facebook page.

CIVICUS speaks about the political crisis in Peru with Nadia Ramos, CEO of the Women’s Leadership Centre...

CIVICUS discusses corruption in Guatemala and the criminalisation of anti-corruption activism with...