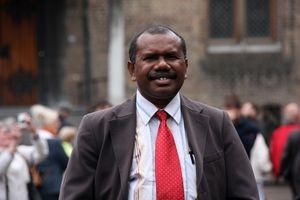 As part of our 2018 report on the theme of reimagining democracy, we are interviewing civil society activists and leaders about their work to promote democratic practices and principles, the challenges they encounter and the victories they score. CIVICUS speaks to Yan Christian Warinussey, a senior West Papuan lawyer and Executive Director of LP3BH (Institute for Research, Investigation and Development of Legal Aid in Manokwari), an organisation that empowers local civil society through advocacy, legal aid and education about basic human rights. In the West Papuan region of Indonesia there have been severe human rights violations, including extrajudicial killings, torture and arbitrary arrests of activists by the Indonesian security forces under the guise of suppressing separatism. Yan has worked for over two decades on human rights in West Papua and has defended activists who were arrested and prosecuted for their peaceful activism. In 2005, he received the John Humphrey Freedom Award from Rights and Democracy in Canada.

1. What are the main challenges for civil society’s fundamental rights of association, peaceful assembly and expression, and for human rights more generally, in West Papua?One of the main challenges for fundamental rights in Indonesia, and especially in West Papua - that is, in the provinces of Papua and West Papua - is the failure of the government to implement the United Nations (UN) International Covenant on Civil and Political Rights, which Indonesia has ratified. Further, there has also been a failure to respect and protect human rights provisions in our Constitution as well as in local laws and regulations. Therefore, when individuals exercise their rights and carry out peaceful actions or gather and associate to protest against human rights abuses, demand independence or seek attention from the international community they are constantly faced with repressive actions from the authorities, such as arrest and detention. In some cases, individuals are also charged with treason.

2. Have the conditions for civil society in West Papua improved or worsened in recent years, and why?
The conditions for civil society in West Papua have deteriorated in recent years, because of the lack of implementation of the laws mentioned above. For example, in 1998, Law No. 9 on Freedom of Expression in Public was passed. However, no implementing regulations were issued. Instead, the police have issued internal guidelines that suppress the freedom of expression. This has become the law in West Papua and is used to suppress activism. Things have become worse also because the central government in Indonesia’s capital Jakarta and in the West Papuan region have not provided space for the legal and democratic education of civilians, including on the issue of the freedoms of association, peaceful assembly and expression.

3. What have been the recent actions of the pro-independence movement, and how has the Indonesian government responded to these?
West Papua used to be a Dutch colony known as Netherlands New Guinea. The Dutch government kept hold of these territories after Indonesia became independent in 1945. Then in the 1960s West Papua was supposed to undergo a decolonisation process, but in 1963 it was annexed by Indonesia. In 1969, Indonesia formalised its control over West Papua by hand-picking about a thousand people among its population and threatening them into voting for annexation in a UN-supervised, but highly undemocratic, process known as the ‘Act of Free Choice’. As West Papuans were denied their right to self-determination, a pro-independence movement under the umbrella of the Free Papua Movement, also known as the OPM, has remained active for more than half a century. Further, a small armed group has led a decades-long low-level insurgency, which the government in Jakarta has used as an excuse to perpetuate a significant military involvement in the region. Numerous human rights violations have resulted from this.

In late 2014 a number of pro-independence movements united under the leadership of an organisation called the United Liberation Movement for West Papua (ULMWP). Ever since it formed, the government's response has been to treat it as a separatist group and refuse to enter into any kind of dialogue with them. In September 2017, a petition calling for independence signed by 1.8 million West Papuans was smuggled out of the country and submitted to the UN Decolonisation Committee, which rejected it on the grounds that West Papua’s cause is outside its mandate. So we are nowhere close to finding a solution.

4. What actions should the Indonesian government take to safeguard democratic freedoms and human rights in the immediate future?
First, we need to strengthen the National Human Rights Commission in Indonesia and revise Law No. 39 of 1999 concerning human rights to allow the commission not only to investigate human rights violations but also to prosecute such crimes. Currently there is a lack of political will by both the police and the Attorney General’s office to undertake such prosecutions.

Second, we need the Indonesian government to formulate and produce implementing regulations on the array of human rights legislation that has been passed over the years, including against torture (Law No. 5 of 1998), civil and political rights (Law No. 11 of 2005) and economic, social and cultural rights (Law No. 12 of 2005).
And finally, especially for Papua, the government must immediately implement the mandate of the 2011 Special Autonomy Law, which calls for the establishment of a Human Rights Court and a Truth and Reconciliation Commission in Papua.

5. Looking further ahead, what would it take for human rights and democratic freedoms to flourish in West Papua? And how can civil society help advance these?
There are lots of things that need to be done in the West Papua region. As a first step, there is a need to open up the region to international scrutiny. Currently journalists and international human rights organisations have been denied access to many part of the region. Previously, the visit of the then UN Special Rapporteur on Freedom of Expression was unilaterally cancelled and indefinitely postponed by Indonesia, allegedly because of the Special Rapporteur’s wish to visit Papua.

There is also a need for human rights and democracy education to be included in the basic, secondary and higher education curricula in West Papua so that we understand these rights. To do this we would need the support of the government through the National Human Rights Commission and human rights organisations in West Papua and internationally.

As I have mentioned before, international support is needed to ensure human rights education and democracy for all West Papuans, and especially for victims of human rights violations, so they know how to defend and advocate for themselves now as well as in the future.

Civic space in Indonesia is rated as ‘obstructed’ by the CIVICUS Monitorr.
If you would like to support the work of LP3BH, please get in touch with CIVICUS.

The Indonesian government should put an end to the judicial harassment against human rights...