As part of our 2018 report on the theme of reimagining democracy, we are interviewing civil society activists and leaders about their work to promote democratic practices and principles, the challenges they encounter and the victories they score. CIVICUS speaks to Elina Leinonen, Communications Officer for the Service Foundation for People with an Intellectual Disability, a Finnish civil society organisation (CSO) aimed at finding individual solutions through the development and provision of high-quality services to support people with intellectual disabilities or special support needs and their families. Elina was also the communications lead for the Not-for-Sale campaign, which used a citizen initiative to promote the rights of people with disabilities in Finland.

1. What was the context in which the Not-for-Sale campaign was launched?

Finland is known for its progressive work on promoting the rights of people with disabilities through development cooperation. However, it took many years for Finland to ratify the United Nations Convention on the Rights of Persons with Disabilities (2006). The Convention opened for signature in March 2007 and entered into force in May 2008. It marked the culmination of years of negotiations and decades of struggles to achieve the global recognition of disability as a human rights issue. It brought a paradigm shift in the treatment of people with disabilities from a medical or charity perspective to a rights-based approach, ensuring their participation in the decisions that affect their lives and access to redress for violations of their rights. But Finland only ratified it in 2016. And while celebrating the ratification of the Convention, people with disabilities in Finland could not breathe a sigh of relief, as the interpretation given to the newly passed Act on Public Procurement threatened to violate their rights to equal and inclusive participation concerning their lives.

As a last resort, CSOs promoted a citizen initiative to change the law and initiated the Not-for-Sale Campaign to promote it. A citizen initiative is a formal procedure that offers citizens an opportunity to have their initiatives considered by parliament, and functions as a complement to traditional representative democracy. According to the provisions of the Finnish Constitution, a minimum of 50,000 signatures of citizens entitled to vote - one per cent of the Finnish population - is required to submit a citizen initiative for parliamentary consideration. Signatures for support can be collected both online and on paper, over a period of six months.

2. What were civil society’s expectations when the initiative was launched? Did you have any alternative plans?

The original idea behind the Not-for-Sale citizen initiative was to end the tendering of essential and lifelong help and support services for people with disabilities. This continues to be our goal. Over the course of the campaign we succeeded in closing the gap between civil society and political decision-makers, as members of all political parties supported ending tendering for the services in question. As part of the citizen initiative, we proposed to restrict the scope of application of the Act on Public Procurement, but political compromise proved to be difficult to reach. CSO representatives and decision-makers agreed that the problems raised will be resolved, although not necessarily by restricting the scope of the legislation. We shared the same goal, so we believed change was possible. All we needed were political decisions.

At the same time, we considered various proposals and came up with an alternative solution. At a later stage, we started proposing to restrict tendering so it does not affect essential services. In practice, this would imply adjustments to the legislation concerning the reform of social welfare and healthcare services, as well as to the Acts on Services and Assistance for the Disabled, Intellectually Disabled and Translation Services Provision for the Disabled.

3. What strategies did the Not-for-Sale campaign use, and what did it achieve?

Advocacy efforts were multifaceted, and the campaign accelerated in late 2017. People with disabilities themselves, along with their families, went on several TV shows to explain the impact that the competitive tendering of services would have on their lives. Many people wrote to newspapers and actively used social media to encourage others to sign the initiative.

As a result of sustained efforts both online and offline, between June and December 2017 the Not-for-Sale campaign collected 72,059 signatures in support of the citizen initiative. The initiative was handed to the parliamentary spokesperson in March 2018 and will soon be discussed in parliament. 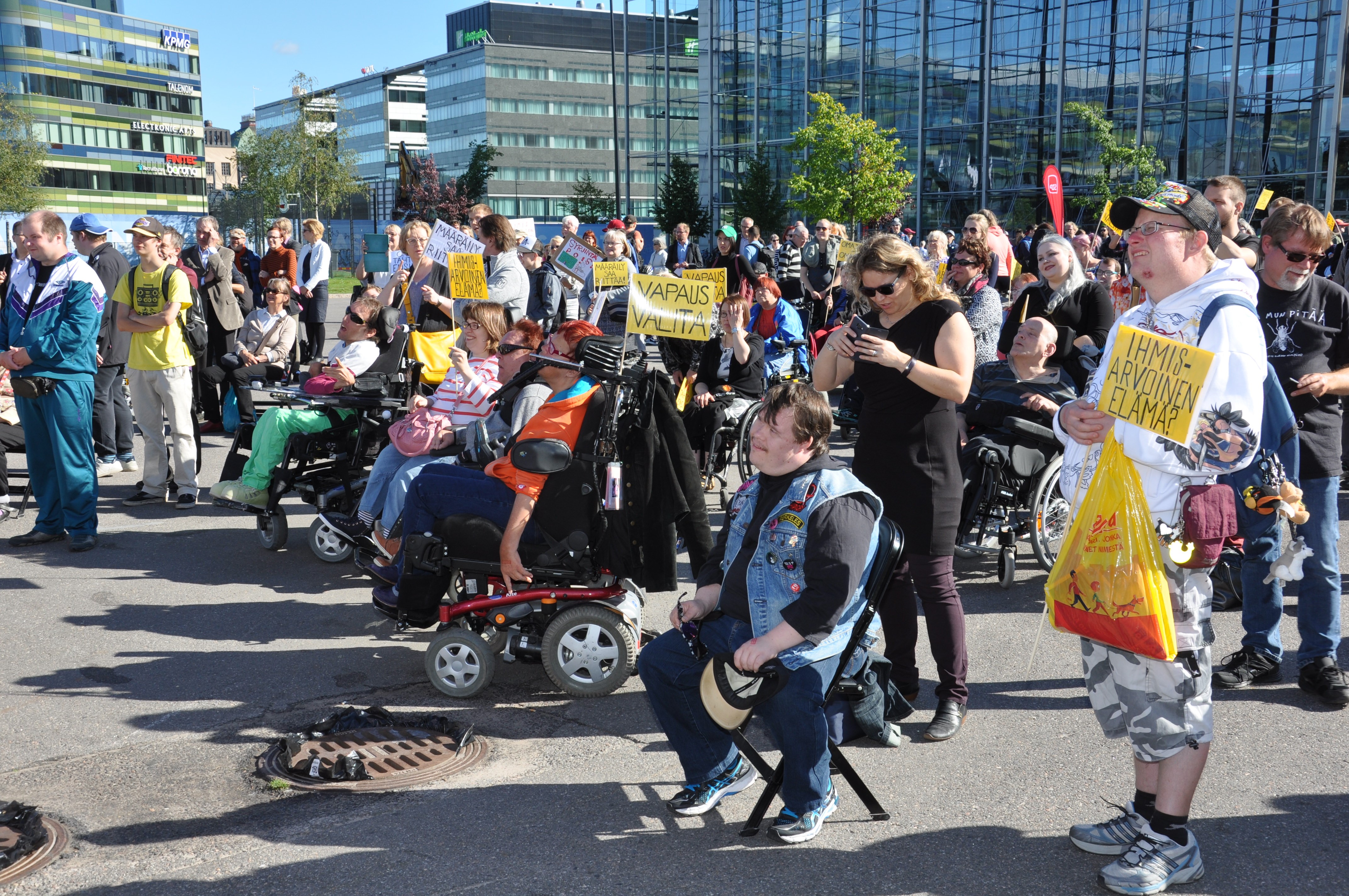 4. What worked particularly well, and what was most challenging during the campaign?

The Not-for-Sale campaign kicked off as a communications campaign during the phase of collecting signatures. We succeeded extremely well in gaining visibility in the media as well as creating social media buzz. The campaign brought the societal role and rights of disabled people into public discussions. During the campaign, dozens of articles featuring people who would be affected by the tendering process were published in a range of newspapers and magazines. The topic triggered several opinion pieces in newspapers. There were also many interviews as well as documentaries on the tendering of services for people with disabilities. However, the most effective tool for gathering signatures for the initiative was social media. On social media, stories about affected individuals spread fast and far, and the emotions evoked translated into sharp increases in the number of signatures collected for the initiative.

But finding a human face for the campaign, one that the public would empathise with, was also a challenge. Before this initiative was launched, organisations of and for people with disabilities had worked together for years to advocate legislative change. Much of this work had taken place silently and away from the spotlight. But the very nature of a citizen initiative required a campaign, and a successful campaign required a human face that others could identify with. It was therefore necessary to locate people affected by the tendering decision who were willing to step forward and talk about their experiences in public. This was not an easy thing to do. Family members, for instance, would be afraid of the repercussions that speaking up about, say, housing services, might have had for their relative living in a facility. However, after the citizen initiative was launched, many people with disabilities and their relatives and friends felt encouraged to step forward through the media. By doing so, they gave a face to the people that had been sidelined in the process of competitive tendering and were able to spell out issues on a more emotional level. Their stories ended up in magazines, newspapers and television and were widely distributed on social media. They touched the hearts of the public and worked as catalysts for action, as people saw that signing the citizen initiative was a very practical thing they could do to support them.

5. What do you find inspiring about the Not-for-Sale campaign?

This campaign turned to be an excellent example of what cooperation among CSOs at its best can achieve. This campaign brought together many CSOs that work with people with disabilities, which for the first time functioned as a unified front. It also paved the way for future cooperation.

It was inspiring to see how people responded to the campaign. Several CSOs, including labour unions, as well as individuals took this matter to heart and contributed thousands of signatures to support the initiative. The goal was felt to be a shared one and people committed to it.

The success of the Not-for-Sale campaign was also proof that coordinated civil society communications efforts can start a public discussion on human rights - in this case, regarding the status and quality of life of people with disabilities in Finland. Right from the start of the campaign we decided that all the arguments put forward to support the citizen initiative and all related communications should be grounded in human rights. It was great to see that human rights and social justice values were strong enough to mobilise not only those directly affected - people with disabilities and their families - but many other concerned citizens as well. We also see this as a showcase for the fact that people are eager to use any opportunities at hand to influence decision-making and play a role in developing our society and promoting justice.

Civic space in Finland is rated as ‘open’ by the CIVICUS Monitor.

By Mandeep Tiwana, CIVICUS Chief Programmes Officer As 2019 gets going, it’s a time for many of us to...

By Mandeep Tiwana, CIVICUS Chief Programmes Officer  If we could reimagine the kind of democracy we...