Aysegul Ekmekci and Semanur Karaman from Third Sector Foundation of Turkey (TUSEV) speak to CIVICUS about the on-going protests in the country and what they mean for the youth, politics and civil society in Turkey. 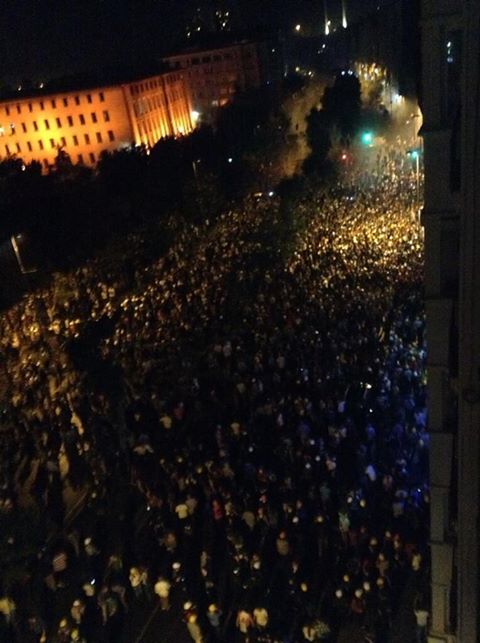 1)    Some analysts are comparing the situation in Turkey with the Arab Spring. What are your thoughts?
The Arab Spring was quite unique in the sense that it was a series of unprecedented events to see in the whole region. Within a matter of months, repressive governments of the region faced strong resistance from their citizens and had to respond to their calls. Although the international media is comparing the events in Turkey with the Arab Spring, they are actually quite different. The events, that started to take place in Istanbul as a reaction to the demolishing of the last green park in the center of Istanbul, did not initially begin with a political demand. However, public reaction to the government has escalated after the police forces used excessive violence against protestors who wanted their voices to be heard by the government.

One element that you can observe throughout the protests in Turkey is about seeing the young and dynamic population demonstrating in the streets. According to a recent research, the average age of protestors is below 28, majority of them has never participated in political activities before, and a big percentage of them consists of students. Taking these into consideration, we can see that these events have spurred a movement within the society and activated young people who do not want their lives to be controlled by the government.

Another aspect that makes the Gezi Park events quite unique is the fact that perhaps for the first time an environmental protest to save a park has turned into a national uprising. Excessive force used by the police has only augmented the public reaction and what started out as an environmental demonstration has turned into a national protest. Although the protection of the park is still one of the major demands of the protestors, respect for the right of “freedom of assembly and expression” is equally important for them.

It is also important to see that the recent protests have been attended by people across ideological and ethnic lines which is a not a picture you see very often in Turkey.  The recent events can be considered as a civilian uprising without ideological motivation or a demand for a revolution; and for all these reasons together, what we have been witnessing is quite different from the Arab Spring.

2)    What are your experiences of civil society interaction with Prime Minister Erdogan’s government?
The interaction between the civil society and government has been a complex one.  A big problem that prevents a highly young population from being active in civil society organisations is the issue of “freedom of association.” If we look carefully, we can see that problems related to freedom of association are usually rooted in the implementation rather than the laws itself. As stated in the 2012 Civil Society Monitoring Report produced by TUSEV, an open interpretation of clauses in the legislation leads to a wide abuse of rights for many civil society organisations, especially for those who work on human rights issues. An application of anti-terrorism laws to CSOs who express their dissatisfaction with current human rights conditions in Turkey has resulted in significant doubts about the future of freedom of association.
The incompatibility between the strong state tradition in Turkey and the participatory decision-making mechanism envisaged by the EU integration process continues to pose challenges to the development of government-civil society relations. Turkish government started to acknowledge the importance of the government-civil society dialogue and therefore initiated consultation meetings with participation of CSOs.

There is no concrete legal mechanism or government policy regulating CSO-Public Sector relations.  This is a significant obstacle preventing the participation of civil society organisations in legislation making and decision making processes in a participatory, egalitarian and transparent manner.  CSOs, which start dialogue and consultation processes with relevant public institutions, express their concern that this process depends solely on the personal will of the head of the Ministries. If certain people who correspond to CSOs leave public institutions or are transferred, the whole process starts from the beginning or is completely abandoned.  This is due to the absence of a concrete mechanism ensuring egalitarian participation of CSOs into policy making processes. In addition, during the local consultation meetings held within the scope of the “Strengthening Civil Society Development and Civil Society-Public Sector Dialogue in Turkey Project” project, CSOs have also expressed that  they receive no feedback regarding their inputs to legislation making and decision making processes.

One of the most promising events of 2011-2012 in terms of enhancing the civil society-public sector dialogue took place during the process of drafting a new constitution. Starting in 2011, the new process for re-writing the constitution would have an inclusive structure in which CSOs can express their opinions. With this new inclusive process, the government had opened a web portal in which the public and civil society could make comments. According to numbers, over 64.000 comments and inputs were written on the website about the new constitution. To what extent the opinions of CSOs were taken into consideration while discussing different clauses of the constitution remains as an important issue. Although this process has been seen as a positive step towards enhancing the public sector-civil society dialogue, the intransparency of  overall discussions about the constitution still raises questions about including civil society organisations in decision making mechanisms.
Thus, the latest response by the Prime Minister Erdoğan about the events has been less than satisfactory. Calling the protestors “looters” and not giving any concessions about the Gezi Park Project has created strong resentments among the public who continues to protest the authoritarian stance of the government.

3)    How free is the media and civil society in Turkey?
The civil society in Turkey can be described as highly diverse and dynamic. However, regulations regarding the  associations and foundations create barriers for the civil society as a whole. An application of anti-terrorism laws to CSOs who express their dissatisfaction with current human rights conditions in Turkey has resulted in significant doubts about the future of freedom of association. Another impedement that CSOs face when they conduct their operation, for example, is the issue of funding and taxation and the current legislation is far  from improving the undesirable conditions for the civil society. There are various inadequacies and inaccuracies in the tax exemption and public benefit status, which leads CSOs to be unsure about their financial sustainability.

The media, on the other hand, has attracted serious cricisms from the general public over the last few weeks due to their lack of coherent journalism methods. While the international media has been watching the news in Turkey with full coverage, the mainstream news channels in the country were less than enthusiastic to show what has been taking place in the streets. This raised doubts about whether the Turkish media is trully independent.

4)    What support can regional and international civil society offer to colleagues in Turkey?
With the involvement of the social media, the movement has been able to attract support from other countries and regions. We have been bombarded with support messages from our colleagues abroad. Since this is about civilians trying to make their voices heard, the most crucial way to help them outside of Turkey has been spreading the news.

At TUSEV, Aysegül Ekmekci works as a Project Assistant within the Social Investment Program and Semanur Karaman works as a Project Assistant for the Civil Society Monitoring Project. TUSEV, a long standing member of CIVICUS and part of the Affinity Group of National Associations  (AGNA) is an umbrella body of over 100 Turkish CSOs. TUSEV was established in 1993 and carries out strategic research and advocacy to support civil society in Turkey. As of today, TUSEV has grown to support network of over 100 associations and foundations that share a vision of strengthening the legal, fiscal and institutional infrastructure of the third sector in Turkey. Among TUSEV's main objectives are non-profit law reform, research on civil society, promoting social investment and philanthropy, and facilitating partnerships across sectors, as well as across borders.