23. Journalists struggle on against rising tide of media repression in Egypt

After being held behind bars for five years for photographing what turned out to be a massacre by Egyptian security forces protest, my colleague and friend photojournalist Mahmoud Abu Zeid, known as “Shawkan”, is still in prison.

A court in Egypt delivered a judgment in his case on 8 September and handed him a five-year jail sentence. I got to know Shakwan, winner of the 2018 UNESCO/Guillermo Cano Press Freedom Prize, after his arrest in Cairo while covering a sit-in at Rabaa al-Adawiya Square that turned into a massacre in which hundreds were killed.

I started to work on his case, searching for evidence and taking it to government and judicial bodies, requesting his release. I visited him during his trial and met his family. 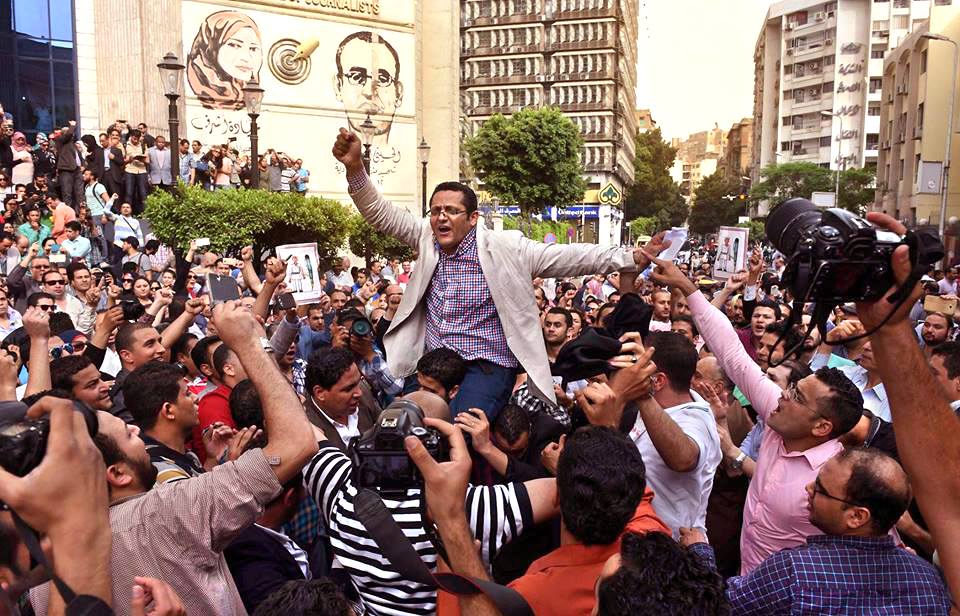 Shawkan’s prosecution represents the price a journalist can pay for doing his job in a dictatorial country. It represents the fear of tyrannical regimes.When I became a journalist in Egypt, nearly a quarter of a century ago, a pen could help pry open the space for civil society to engage. For a young graduate then, journalism was dream career.

I never imagined that press freedom would deteriorate to the level it has in the country today. Seven years after the revolution that toppled dictator Hosni Mubarak, who ruled for nearly three decades, Egypt ranks towards the bottom of a list of the world’s worst countries for press freedom, according to media watchdog, Reporters Without Borders (RSF). This is part of a wider crackdown on journalists across the globe. Press freedom sunk to its worst level this century, an Article 19 study found last year.

The report also highlighted Egypt as one of the countries where there had been a deterioration of freedom of speech, along with Venezuela, Burundi, Poland, Brazil, and Bangladesh. This year, we have seen journalists killed in Afghanistan, and more recently the Capital Gazette attack in the US. Meanwhile in Myanmar reporters are continuing to languish in jail.

In 2017, I was given a one-year suspended sentence along with the previous head and board member of the Egyptian Journalists Syndicate for “harboring fugitives”, colleagues Amr Badr and Mahmoud el-Saka. This was over a 2016 police raid on the union’s Cairo headquarters, where the journalists had sought shelter after the government charged them for their reporting on two Red Sea islands that Egypt had handed over to Saudi Arabia, a controversial issue.

The attack on me made me more determined to continue my struggle against the repression. Today, it is easy to think about leaving Egypt and working from abroad. But I see that there is still some space inside to work. I am trying to use that space to open a new window. I am constantly worried, though, especially that my family will pay the price for my work. My two sons are constantly scared that I could be jailed for a long time at any time.

After the Al Bedaiah website that I was working for was shut down by the government in 2017, journalists needed a new outlet for freedom of expression. For me, it was frustrating not being able to express myself, so I launched the Katib news website in collaboration with the Arabic Network for Human Rights Information in June this year. After only nine hours of operation, but with 10,000 visitors, it was shut down by the government. We are now working with a group of Egyptian developers to find ways around this closure.

Meanwhile, attacks on journalists in Egypt continue. Most recently, in early July, more journalists were arrested. Slam Gomaa, a photographer for Veto website, was one of them.

During Mubarak’s rule, there was a crackdown on the press. Many newspapers shut down, a number of them I had worked for, like Al Dostor and Elbadil. But journalism could still be used as vehicle to defend oppression of citizens to some extent. There were still spaces for me to expose police abuse and corruption.

The movement that overthrew Mubarak liberated the press for about two years. But Abdel Fattah el-Sisi’s regime is now also using parliament, the Higher Press Council, and other governing bodies to target the press. This has included measures from establishing vague laws for media and fining newspapers that do not please them to preventing journalists from doing their jobs by destroying their equipment to arrests, physical assaults, detention and torture.

The regime now has in its sights other freedom fighters, lawyers, unions and political parties who support us. Civil society institutions are struggling to survive the waves of repression.

After nearly 25 years as a journalist in Egypt, at the age of 46, my hopes for a free press there have faded. I can liken my dream of this happening to reopening a hole-sized space in a wall of darkness.

Being a journalist is no longer a dream for a young person in Egypt. And if you are a reporter in the country, the goal is now to open up a small space for our colleagues in the remaining outlets that we have, none of them independent.

As I said upon receiving the 2017 Nelson Mandela-Graça Machel Innovation Award for individual activism, presented by global civil society alliance CIVICUS, even from behind bars, journalists’ voices can be heard all over the world.

We will continue to fight.

Khaled El-balshy is an award-winning Egyptian journalist, editor and human rights activist, based in Cairo.