Civil society is blurring? Let’s remember our whys and get creative!

Reflection from “Money, Culture and Change” - a participatory action research process on the sustainability of youth-led civil society organisations (CSOs) in Medellin, Colombia.

In the middle of a research workshop, Stiven got up and drew the picture below on the board.  Stiven is a civil society leader active in Castilla, a neighbourhood on the slopes of Medellin, Colombia. He has not studied any theories of civil society, but, with his drawing, he put his finger on a big wound within the sector. He used the picture to explain that funding, and CSOs themselves, should be seen as tools, trampolines to promote a gearing of economic development and social economies based on solidarity. 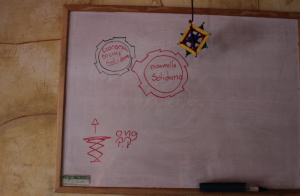 As part of a PhD program at the Institute of Development Studies (University of Sussex), for the last four years I have been researching how youth-led CSOs seek financial sustainability, and with what implications for their organisational culture and understanding of social change.

Carrying out participatory action research with a group of ten youth-led CSOs in Medellin, Colombia we found a sort of double paradox in resourcing youth-led civil society organisations.

First, we noticed that youth-led organisations are more likely to want to do work that fits outside the buzzwords of the moment (read: they do not think of following the money). Yet, to do the type of work they value they do need resources.

If they manage to obtain some of the scarce funding available, they are asked to fit within the cha-cha-cha of funding parameters which often limit their independence - they need to adopt practices that might feel incoherent or set priorities that might not be their own.

Funding available to youth-led groups is scarce and often comes along with worldviews that disregard the contribution these organisations are making while emphasizing the more ‘technical aspects' of development. The risk is that CSOs will become more homogenous, less able to be in touch and respond to the needs they perceive in their communities.

They work with the crumbs of funding available, while having to digest the practices and values of a system they would not want to support.

Many youth-led organisations tend to be critical of our economic system and they would like to be truly independent, while they continue resourcing themselves from within a system that they struggle to fundamentally question - because it feeds them.

The other option is to generate funding by engaging with the market (e.g. Social entrepreneurship) - but many youth-organizations ask: how can we solve the challenges of a society, that we think are deeply tied to the injustice of the neoliberal economic system, by working with the same logic?

To make it all more complicated they often associate funding with negative emotions - they might think: ‘we do need funding, but money sucks’. It’s hard to attract funding when you think it sucks.

In short, the idea of an independent civil society seems redundant.

Looking at the future of civil society

A turning point in our research was a two-day participatory foresight workshop. Young civil society leaders and representative from donors’ institutions in Medellin came together to construct a range of eight scenarios for the future of civil society in 2035.

One of the most striking observations during the workshop was that, across all eight scenarios, participants expected differences between the public, private, and civil society sectors would blur even further.

Today, CIVICUS defines civil society as: “the arena - outside of the family, the state, and the market - which is created by individual and collective actions, organisations and institutions to advance shared interests”. In short, the current definition of civil society is tied to the idea that there are three sectors.

As they expected these boundaries between sectors to become thinner, participants were challenged to distil the meaning of civil society. If the structure and resourcing modalities of civil society were to change radically; if CSOs, as we know them today, were to disappear – what would be left of the concept of civil society?

To explore these scenarios, we had to go back to the essence. Why does civil society matter?

Across all eight scenarios, civil society was understood by participants as providing opportunities for questioning, reflecting, re-imagining and renewing social values and norms. A discussion on the question “What is the role of Civil Society?” suggested that civil society is a space where alternative values can be articulated, nourished, and explored. Someone argued that civil society seeks to “resist all the pressure to suppress citizens’ ability to express themselves”. Civil society generates well-being: it seeks to work in collaboration with others, it builds strong social ties, it crafts communities. Someone summarised the discussion by stating that civil society “promotes coexistence as intrinsically important”.

This research pointed out that many young people in Medellin are thirsty for different ways of being together and experiencing alternative community constructions: they are craving meaning. Consciousness, spirituality, and connection with nature were at the core of their work.

The youth-led CSOs in this study realised that resources matters beyond being instrumental to their work. Through funding, they create ties and conversations with other sectors. As we admitted civil society is not so independent, we realised that CSOs can only sustain themselves when they can co-construct realities with others, so as to pull together resources and energy.

For this type of work to happen, the current funding logics need to be transcended. Now, this won’t happen overnight - there is a lot to learn.

So the youth-led CSOs that took part in this study are engaging in constant experimenting.

They seek financial sustainability by trying different strategies that can uphold their views, while learning to engage with market-forces selectively. In other words, they are responding to market forces as a necessity, while trying to uphold their worldview as a way to work toward their visions. We found that the CSOs in this study were developing their ability to also speak the language of the market as a way to expand their opportunities, comprehend their ecosystems, and contribute to shaping it. Meanwhile, they organize rituals, exchange their products and services, build meaningful relationships with people from different institutions, support local artists and artisans, grow their own food, and resist getting in competition with one another. They choose solidarity and collaboration at every corner.

Civil society cannot afford to sit around and question an economic system without looking to find new ways to sustain itself. We all need to play, experiment and get creative.

CIVICUS is currently analysing trends and practices of resourcing youth-led groups and movements in Africa and Latin America. We hope to gain more insights on trends and challenges that could provide useful recommendations for both funders and youth-led groups. The analysis will be led by the author of this blog who has been researching extensively on the sustainability of youth-led groups.

If you’d like to input/engage in this analysis, reach out to