A new global report by CIVICUS finds that rights of civil society were violated in almost half of the world’s 193 countries in 2014. In particular, the report draws attention to the systematic assault on Freedom of Association, Expression and Assembly.

The CIVICUS Civil Society Watch Report shows that core civil society freedoms of expression, association and peaceful assembly were violated to a significant degree in at least 96 countries during 2014.

“We have known for some time that encroachments on civic space and persecution of peaceful activists were on the rise but it’s more pervasive than many may think,” said Dr Dhananjayan Sriskandarajah, Secretary-General of CIVICUS. “Our monitoring in 2014 shows that legitimate civil society activities are worryingly under threat in a huge number of countries in the global North and South, democratic and authoritarian, on all continents.”

The two regions of highest concern for defenders of civic space are Sub-Saharan Africa and the Middle East and North Africa, which between them account for over half of the countries counted. 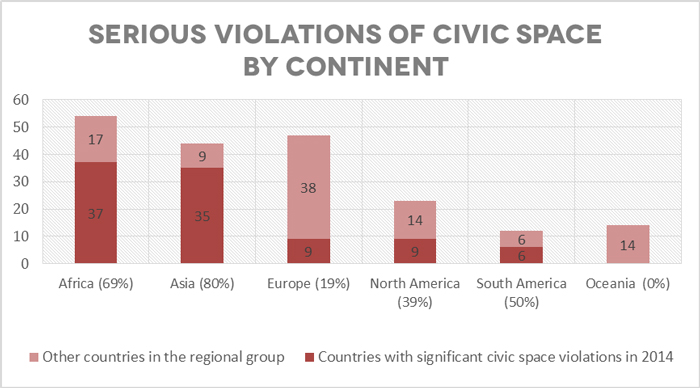 The wide range of issues for which states are showing intolerance is of particular concern. Much of this is linked to the global democratic deficit highlighted in CIVICUS’ 2014 State of Civil Society Report. Today, while activists engaged in political reform, uncovering corruption and human rights violations continue to be targeted, those defending local communities from land grabs and environmental degradation, as well as those promoting minority group rights have been subjected to various forms of persecution.

The link between unethical business practices and closing civic space is becoming clearer as global inequality and capture of power and resources by a handful of political and economic elite rises. Advocacy for equitable sharing of natural resources and workers’ rights is becoming increasingly fraught with danger. Examples abound, from the killings of environmental activists in Brazil to the intimidation of organisations challenging the economic discourse in India, to arbitrary detention of activists opposing oil exploration in the Democratic Republic of Congo (DRC).

Non-state actors including extremist groups organised on the basis of religion and ethnicity pose particular threats to those advocating equality for all, including women’s rights and LGBTI rights advocates in countries such as Pakistan and Uganda. This list also reveals that counter-terror measures are increasingly used as a weapon to silence peaceful human rights advocates in countries such as Azerbaijan, Bahrain, Saudi Arabia and Malaysia. 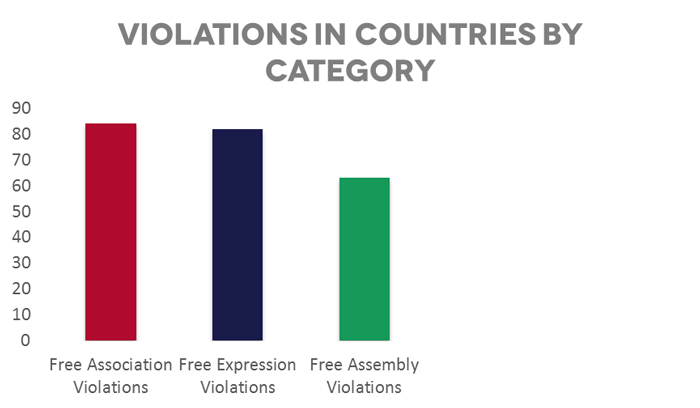 Regardless of the right being violated, individuals – civil society activists, human rights defenders, journalists, protesters and ordinary citizens alike – bore the brunt of most civic space violations. Other tactics to close civic space include passing restrictive laws and targeting individual CSOs by raiding their offices, freezing their bank accounts or deregistering them. A number of democracies are also engaging in illicit surveillance of civil society activists, further weakening respect for human rights. Stigmatisation and demonisation of civil society activists by powerful political figures and right wing elements remains an area of concern.

“When citizens’ most basic rights are being violated in more than half the world’s countries, alarm bells must start ringing for the international community and leaders everywhere,” said Sriskandarajah.