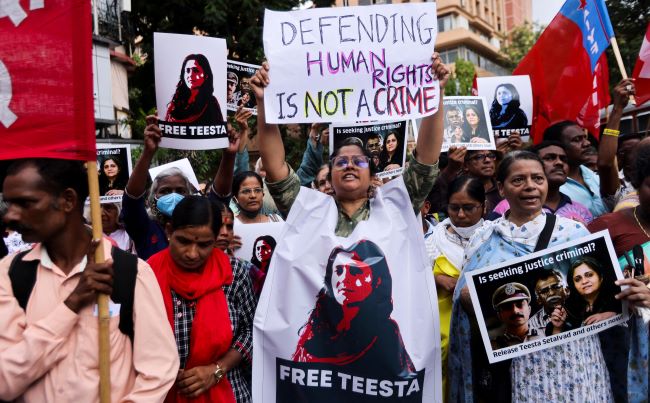 CIVICUS, the global civil society alliance, condemns the recent arrest of Teesta Setalvad and calls on the government of India to stop targeting human rights defenders. The arrest is the latest attempt by the Modi government to criminalise activists and undermine civic space in the country.

Teesta Setalvad is a human rights defender, author and award-winning journalist in India. Setalvad and her organisation – the Citizens for Justice and Peace (CJP) have played a prominent role in the campaign for justice for the victims of the 2002 massacre of close to 2,000 Muslims in the state of Gujarat when Narendra Modi was chief minister.

Setalvad was detained by the anti-terrorism wing of the Gujarat police on 25 June 2022 from her home in Mumbai hours after India’s interior minister, Amit Shah, a close aide of Modi, accused her of giving baseless information to the police about the deadly 2002 anti-Muslim violence during Modi’s chief ministership of the state. The riots triggered by a train burning incident killed, according to some estimates, 2,000 people, a majority of them Muslim. Official figures stand at about 1,000.

Teesta Setalvad was brought to Ahmedabad and is facing charges together with two former police officers for criminal conspiracy and fabricating evidence, among other charges. The move follows a First Information Report (FIR) lodged against the three at the Ahmedabad Detection of Crime Branch (DCB), a day after the Supreme Court dismissed allegations of the involvement of the chief minister Narendra Modi, his council of ministers and bureaucrats in the 2002 riots. The police have cited observations from the judgement to justify the new case against the trio.

“The arrest of human rights defender Teesta Setalvad is a clear tactic to intimidate and silence her for her activism around the Gujarat massacre, especially for justice and accountability. The authorities must halt the judicial harassment against her, drop the trumped-up charges and release her immediately and unconditionally,” said Josef Benedict, CIVICUS Asia Pacific researcher.

While she was detained, Setalvad filed a written complaint to the Santacruz police station alleging illegal and improper treatment by the police officers. Setalvad has alleged that the police officials forcibly entered her bedroom and assaulted her when she demanded to speak to her lawyer. In her complaint, Setalvad has also stated that the assault left her with a bruise on her left hand, and that she was not shown the First Information Report  or a warrant till her lawyer arrived.

Setalvad’s  case is the latest assault on civic space in India. The CIVICUS Monitor has documented a rapid decline in civic freedoms in recent years which led to its civic space rating being downgraded to ‘repressed’ in 2019. Scores of human rights defenders and activists remain in detention under the draconian Unlawful Activities (Prevention) Act (UAPA) and other laws. The authorities have also used the controversial Foreign Contribution (Regulation) Act (FCRA) to target critical human rights groups and ban organisations from receiving foreign funds. Journalists have also been targeted and there have also been concerns about the widespread surveillance of activists, journalists and others critical of the Modi government following the Pegasus spyware exposé.

“The appalling treatment of Setalvad highlights the hostile environment today for activists in India for speaking up for justice and human rights. It is creating a climate of fear and self-censorship. The government must immediately reverse course by releasing all detained activists and take steps to ensure that human rights defenders are able to carry out their legitimate activities without any hindrance or fear of reprisals” said Henri Tiphagne, the National Working Secretary of HRDA – India.