Slovenia: New research on the state of civic freedoms ahead of elections

Ahead of Parliamentary elections on 24 April, the government has stepped up its political interference in the public broadcaster, while anti-government protesters and independent journalists continue to  be harassed. 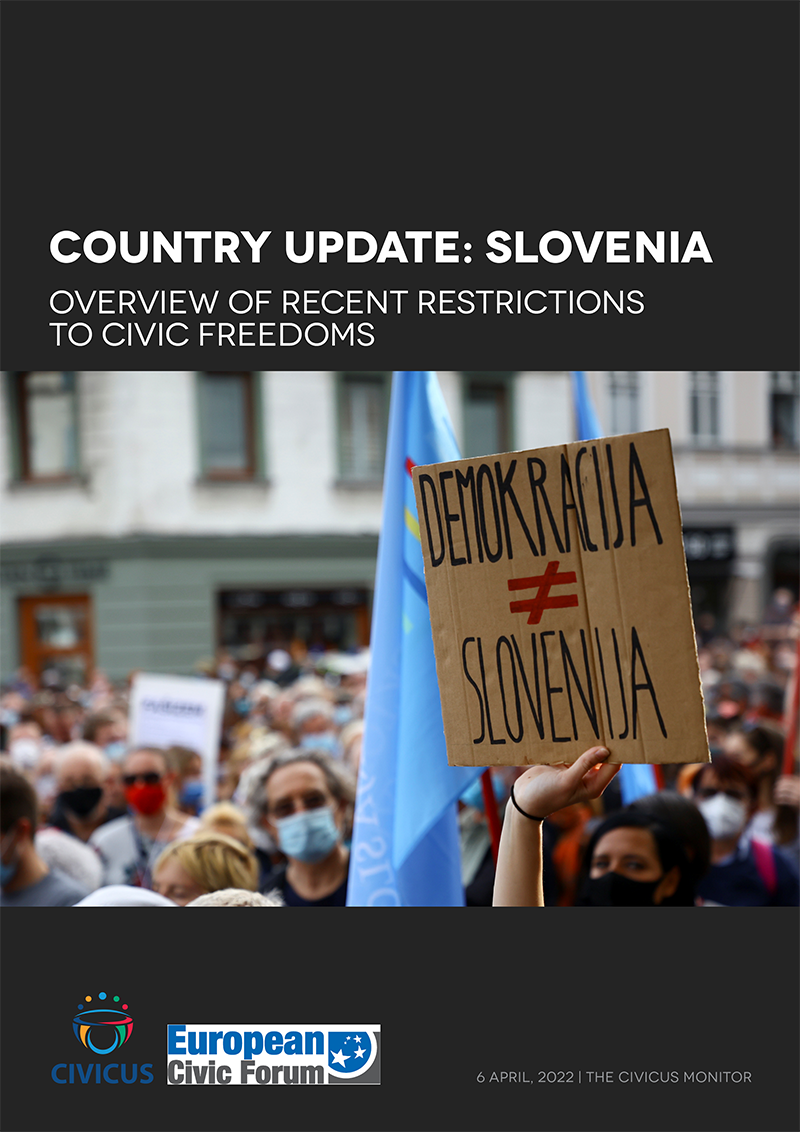 Our latest research brief released today highlights how in the last two years under Janez Janša’s government, civic freedoms are deteriorating. In December 2020 the CIVICUS Monitor downgraded the country’s civic space rating from ‘open’ to ‘narrowed’ signalling the  decline. In June 2021 the country was also placed on the rights index's periodic Watchlist, a roundup of countries where a rapid decline in civic freedoms has occurred. The fundamental civic and democratic rights of freedom of peaceful assembly, expression, and association are under attack ahead of the elections.

Since Janša came to power in March 2020, Slovenians have staged weekly, spontaneous cycling anti-government protests. The government has responded by intimidating protesters, with the State Prosecutors Office bringing cases against so-called organisers of unannounced or unregistered protests to recover the costs of police intervention. Jaša Jenull, a prominent protester at the anti-government protests is facing fines amounting to over 40,000 Euros.

“These repressive practices have wider repercussions beyond targeted activists. For example, administrative courts are now kept busy with reviewing these unlawful fines, reducing their capacity to work on other cases. State resources which are being deployed to enforce disproportionate pandemic restrictions and silence dissent could have been used to address people’s needs which have been exacerbated by the COVID-19 pandemic and initially triggered ongoing protests,” said Giada Negri, Research and Advocacy coordinator for the European Civic Forum.

The current government has ramped up its political interference at public broadcaster RTV Slovenia (RTVSLO). In March 2022 RTVSLO staff staged protests over the appointment of Igor Pirkovič as acting editor of the public broadcaster’s web portal Multi Media Centre (MMC), who was previously paid by the government as a screenwriter of state celebrations. The MMC’s editorial board claims that Pirkovič is biased in favour of the ruling SDS party and believes that he was brought in to change the portal's pre-election reporting in favour of the ruling coalition. Last year, the appointment of Director General Andrej Grah Whatmough at RTVSLO sparked a series of editorial and programming changes, which were approved by RTV SLO’s Programme Council, an editorial decision-making body which has been infiltrated by the ruling SDS Party.

Prime Minister Jansa has used the current Ukraine crisis as an excuse to attack RTVSLO’s political debate channel Tarča for its coverage of the war against Ukraine, accusing it of playing “Putin’s Agenda”. This led to the Programme council reprimanding RTVSLO journalists and announcing that it would now only be using BBC News coverage on the Ukraine crisis.

“While Jansa has condemned Russia’s aggression against Ukraine, at home he is adopting Putin style tactics through repeated political interference at the public broadcaster RTVSLO and vilification of independent journalists. His government has increasingly harassed peaceful protesters and slashed funding to civil society. The European commission must take action to ensure that repressive measures against journalists and civil society are redressed,” said Aarti Narsee, Civic Space Research Lead Europe, CIVICUS.

Slovenia is rated "Narrowed" on the CIVICUS Monitor. 40 other countries have this rating including Romania, Italy and South Korea (see all). The narrowed rating means that while the state generally allows individuals and civil society organisations to exercise their rights to peaceful assembly, freedom of speech and freedom of association, violations of these rights also take place.