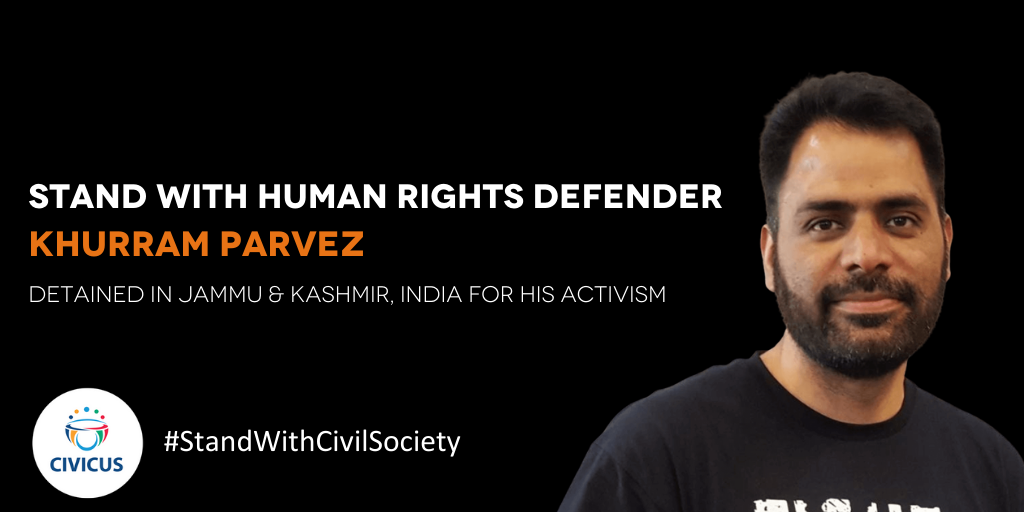 Ahead of his upcoming hearing on 21 January 2022, CIVICUS, a global civil society alliance, calls on the government of India to immediately and unconditionally release human rights defender Khurram Parvez. The judicial harassment he is facing highlights the repressive environment for activists and critics in Indian administered Jammu and Kashmir.

Khurram Parvez is the Programme Coordinator of the Jammu and Kashmir Coalition of Civil Society (JKCCS) and the Chairperson of the Asian Federation Against Involuntary Disappearance (AFAD). He was detained on 22 November 2021. He is facing multiple charges under several laws, which CIVICUS believes have been trumped up by the authorities because of his activism.

These include the India Penal Code Sections 120B (criminal conspiracy), 121 (waging, attempting to wage, abetting waging of war against the government), and 121A (punishment for conspiracy to wage war against the government of India). He has also been charged under the draconian counter-terrorism law, the Unlawful Activities (Prevention) Act 1967 (UAPA), Section 17 (raising funds for a terrorist act), 18 (conspiracy), 18B (recruiting of any person or persons for a terrorist act), 38 (offence relating to membership of a terrorist organisation) and 40 (raising funds for a terrorist organisation).

His arrest took place together with a raid on his house and the office of the Jammu Kashmir Coalition of Civil Society in Srinagar, following a First Information Report (FIR) lodged by the National Investigation Agency (NIA) on 6 November 2021. Parvez's mobile phone, laptop and several books were also seized. His hearing was scheduled to begin on 23 December 2021 but was adjourned to 21 January 2022, prolonging his judicial custody. He initially spent 12 days under the custody of the NIA before being transferred to Delhi's Tihar jail.

"We are appalled by the arbitrary detention and intimidation against human rights defenders Khurram Parvez under broad and vague anti-terror legislation, which have been systematically used to detain activists for prolonged periods. The abuse of such laws have put human rights defenders in India at great risk and has created a climate of fear," said Cornelius Hanung, Asia Advocacy and Campaigns Officer of CIVICUS.

Khurram Parvez has faced systematic harassment to advocate against human rights violations in Indian administered Jammu and Kashmir. In September 2016, the Indian authorities arrested him a day after he was barred from travelling to Switzerland to attend the 33rd session of the United Nations Human Rights Council. He was charged under the draconian Jammu and Kashmir Public Safety Act (PSA), which allows detention without charge for up to two years. He was released after 76 days in detention.

In October 2020, nine simultaneous raids were conducted by the National Investigation Agency (NIA) on the houses and offices of several human rights defenders, non-governmental organisations and newspapers in Jammu and Kashmir - including the house of Khurram Parvez.

"Human rights defenders and their work should be protected, not threatened. We urge the government of India to halt its intimidation of activists in Jammu and Kashmir and commit to building an enabling environment for human rights defenders to exercise civic freedom, in accordance with India's human rights obligations," Cornelius Hanung said.

Human rights groups have raised grave concerns over the human rights situation in Jammu & Kashmir, particularly after a decision to revoke constitutional autonomy on 5 August 2019. Thousands of Kashmiris have been detained without charge under the Public Safety Act (PSA), including political leaders, opposition activists, lawyers and journalists and there are some serious allegations of beatings and abusive treatment in custody, including alleged cases of torture. Restrictions on movement and internet shutdowns have also been imposed in several parts of the region.

CIVICUS Monitor is an online platform that tracks the fundamental rights of freedom of assembly, association and expression in countries across the world. The CIVICUS monitor rates India' civic space as repressed.