Cambodia: A year on, the persecution of human rights defender Rong Chhun and other activists continue 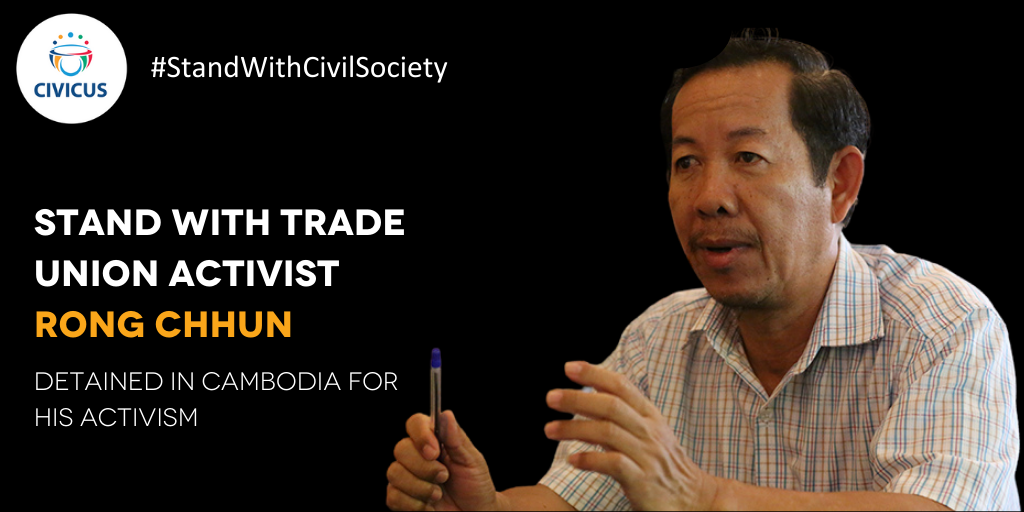 CIVICUS, the global civil society alliance, calls on the Cambodian authorities to drop the baseless charges against trade union activist and human rights defender Rong Chhun and to release him immediately and unconditionally. One year on from his arrest, his ongoing persecution highlights the unrelenting government repression against activists in the country and his ongoing detention during a pandemic is putting his life at risk.

Rong Chhun, the President of the independent Cambodian Confederation of Unions and a member of the Cambodia Watchdog Council, was arrested on 31 July 2020. He has been a vocal human rights defender and has long raised concerns about the plight of farmers’ and workers’ rights.

Chhun was charged with incitement under Article 495 of Cambodia’s Penal Code after he advocated for the land rights of villagers living near the Cambodia-Vietnam border. He was jailed at Prey Sar Prison and his trial began in January 2021. He has been denied bail amid an unprecedented COVID-19 outbreak in Cambodia’s prisons.

“The authorities must drop the politically-motivated charges that have been brought against Rong Chhun. Speaking up for local communities should never be a crime. The persecution against him exemplifies the systematic weaponization of the courts by the Hun Sen regime to target activists and silence all forms of dissent,” said Lisa Majumdar, CIVICUS Advocacy Officer.

Rong Chhun’s arrest last year sparked a wave of arrests in relation to planned protests to demand his release. Many of the activists arrested remain in detention and have also been denied bail. They include Hun Vannak, Chhoeun Daravy, Tha Lavy, Koet Saray, and Eng Malai (aka So Metta), who are members of Khmer Thavrak and Sar Kanika a former activist for the opposition Cambodia National Rescue Party (CNRP).  Others detained include Muong Sopheak and Mean Prommony, member and Vice-President of the Khmer Student Intelligent League Association (KSILA).

“It is extremely disturbing that activists in Cambodia have been denied bail despite calls by the UN to decongest prisons and release political prisoners during the pandemic. Holding them at this time poses a serious risk to their lives - and adds another layer of punishment for these activists. The international community must do more to stand side by side with Cambodia civil society and demand their release,” said Lisa Majumdar.

Research undertaken by the CIVICUS Monitor shows that laws are routinely misused in Cambodia to restrict civic freedoms, undermine and weaken civil society, and criminalize individual’s exercise of their right to freedom of expression. Human rights defenders, civil society activists and journalists are often subject to judicial harassment and legal action. They have also been ongoing police ill-treatment against the families and relatives of detained activists  from the banned Cambodian National Rescue Party (CNRP) who have been holding protests.