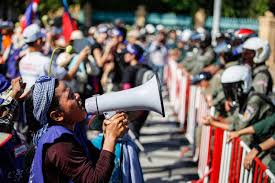 Phnom Penh, 13 August 2020 – We, the undersigned national and international organisations and communities, call on the Royal Government of Cambodia (“RGC”) to immediately discard the repressive draft Law on Public Order and uphold its obligations under international human rights law. The draft law contains an extensive array of provisions that effectively criminalise the legitimate everyday activities of many within the Kingdom of Cambodia (“Cambodia”), in violation of their rights to freedom of expression, association, assembly and other protected human rights. If enacted, the draft law will become yet another piece of repressive legislation in a legal framework that severely undermines human rights.

The draft law has been written in an attempt to regulate public spaces and public behavior within those spaces. It covers aesthetics, sanitation, cleanliness, noise, and social values, all under the broad aim of maintaining “public order”. It endeavors to set out specific activities that are prohibited, lists a range of penalties that may be imposed for breaches, and grants unfettered enforcement powers to authorities across all levels of government, with the proclaimed objective of creating “a more civilized society”. We are gravely concerned about the multitude of overbroad and arbitrary provisions in the draft law which violate numerous human rights protections enshrined in the Constitution of the Kingdom of Cambodia (“the Constitution”) and human rights treaties to which Cambodia is a party, including the International Covenant on Civil and Political Rights (“ICCPR”) and the International Covenant on Economic, Social and Cultural Rights (“ICESCR”). Several of our key concerns are listed below, however the only way to remedy this unnecessary draft law is to discard it in its entirety.

The draft law also contains provisions which seriously undermine the rights of individuals with mental health conditions, as well as facilitate discrimination and stigmatization. The draft law imposes arbitrary and unjustifiable restrictions on individuals with a so-called “mental disorder”, which is vaguely defined as “a change which results in the loss of the sense of right or wrong”. This definition lacks any legal or scientific basis and fails to require an expert medical diagnosis. It instead seems to determine an individual’s mental health on their ability to make a moral judgement, while failing to consider the severity of the “mental disorder”. It therefore fails to comply with international human rights standards for not determining what can amount to a “mental disorder” in accordance with internationally accepted medical standards. The draft law prohibits these individuals from “walk[ing] freely in public places” (Art. 25). This blanket restriction on the movement of a vast cohort of individuals, without requiring a determination as to whether it is absolutely necessary under the individual circumstances, impinges on the rights to liberty and freedom of movement as guaranteed by Art. 9 of the ICCPR, and violates rights protected under the International Convention on the Rights of Persons with Disabilities, which Cambodia has ratified. The draft law is deeply concerning as it strips people with mental health conditions of their most fundamental human rights and allows for blatant disability-based discrimination.

In addition to the above-mentioned groups, the draft law contains concerning provisions that could exacerbate discrimination against women (Art. 37, as analyzed below).

Ultimately, the draft law has the potential to severely restrict freedom of expression both online and offline. Art. 37 prohibits a broad range of unreasonably vague categories of expression where it affects “national tradition and dignity”, without elaborating on the standards of dignity to which the public will be held accountable to. This includes, for example, “exhibiting or disseminating writing or picture or using cursing words on social media”, “showing arrogant behavior” and “disseminating or posting writing, signs or pictures that represent any threat”. Extending the scope of the law to the online sphere gives rise to further concern due to the widespread repression of freedom of expression online in Cambodia, with 2020 baring witness to multiple arrests of individuals for expressing opinions online.

Art. 6 raises concerns for the enforcement of the draft law as it empowers local authorities to “assign contractual officials to assist in maintaining public order”. “Security guards” or “para-police” hired by local authorities in Cambodia have a long track record of violently harassing individuals and human rights defenders seeking to exercise their rights, and are rarely held accountable. These contracted security forces operate in a legal vacuum, lacking regulation, accountability and training, and as such they represent a serious threat to the peaceful exercise of human rights.

The draft Law on Public Order has been released amid a crackdown on fundamental freedoms in Cambodia. Laws that grant overbroad and unfettered powers to the RGC are regularly misused to undermine human rights and target free speech. If brought into force, this draft law would further curtail the rights and freedoms of individuals in Cambodia to the detriment of the nation as a whole. We therefore call on the Royal Government of Cambodia to immediately discard the draft Law on Public Order in its entirety and uphold its obligations under international human rights law.

This joint statement is endorsed by: