Findings based on data released today by the CIVICUS Monitor a global research collaboration which rates and tracks the respect for fundamental freedoms in 196 countries.

CIVICUS has today released People Power Under Attack 2018, a new report showing that nearly six in ten countries are seriously restricting people’s fundamental freedoms of association, peaceful assembly and expression. This reflects a continuing crisis facing civil society organisations and activists across the world, with the space for civic activism most commonly undermined through censorship, attacks on journalists and harassment of human rights defenders.

“This data is a wake-up call. Given the scale of the problem, global leaders, including the G20 who are meeting this week, need to take the protection of civic freedoms far more seriously,” said Cathal Gilbert, Civic Space Research Lead at CIVICUS. “For civil society, 2018 was a story of states innovating to suppress and restrict criticism by those who dare to challenge people in power.”

The report, which is based on data from the CIVICUS Monitor - a global research collaboration - shows that civil society is under serious attack in 111 out of 196 countries. This is up from 109 countries at our last update in March 2018. In practice, this means that repression of peaceful civic activism continues to represent a widespread crisis for civil society in all parts of the world, with just 4% of the world’s population living in countries where governments are properly respecting the freedoms of association, peaceful assembly and expression. 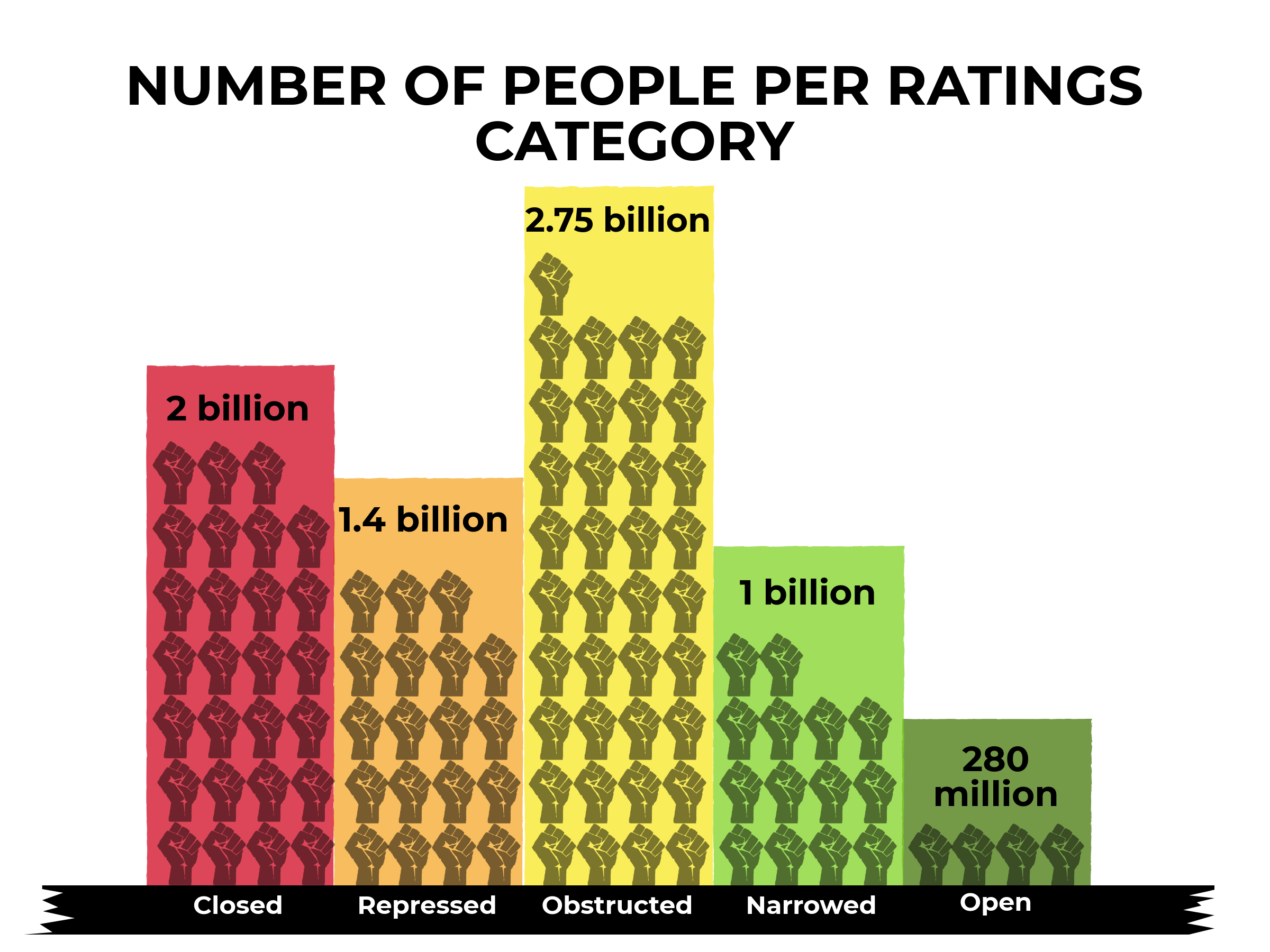 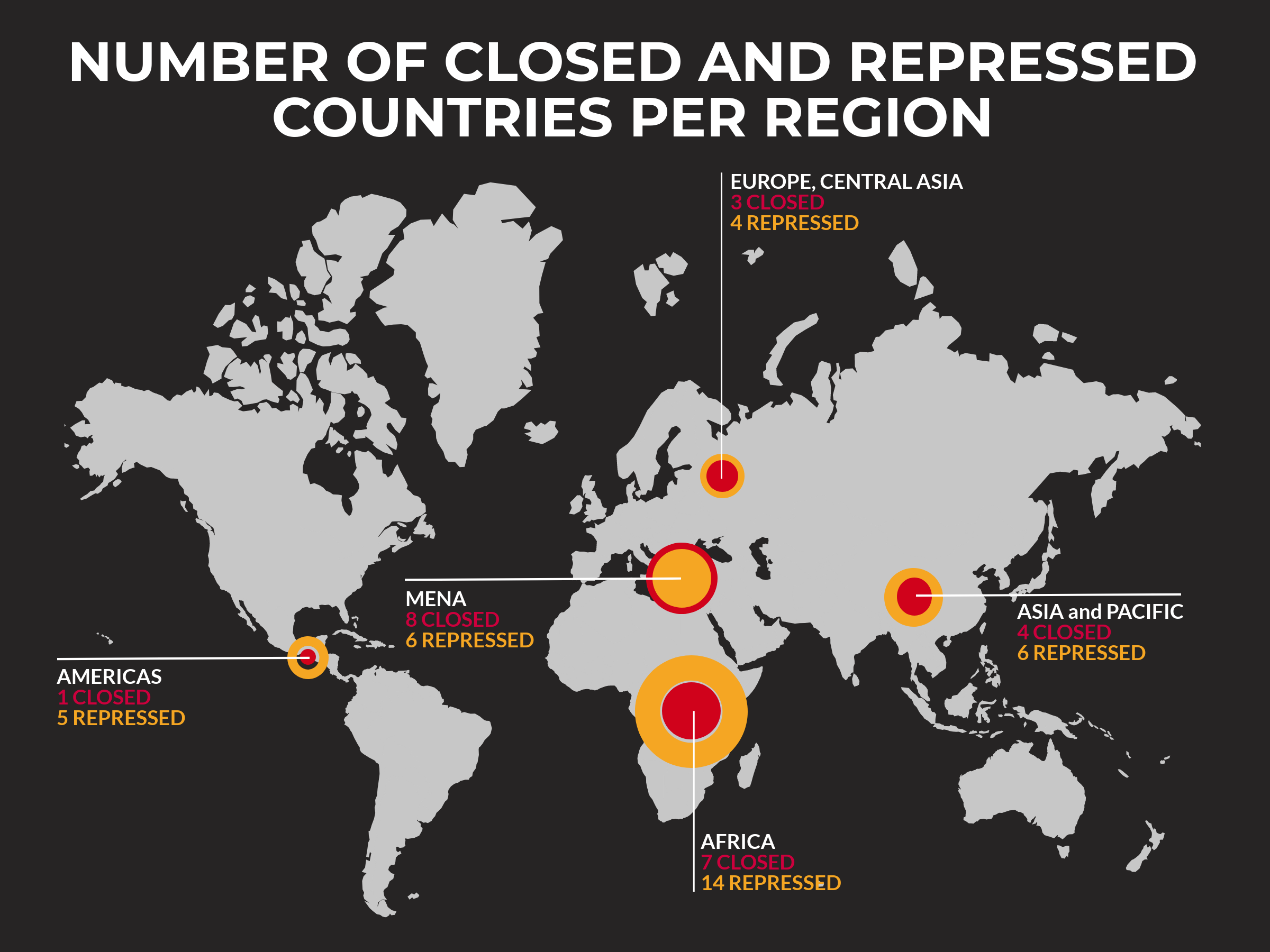 People Power Under Attack 2018 also provides analysis of the kinds of violations most frequently recorded on the CIVICUS Monitor over the past two years. Globally, attacks on journalists and censorship are the two most common violations, indicating that power holders are going to great lengths to control public narratives and repress freedom of expression. Harassment of activists and the use of excessive force by security forces during protests are the third and fourth most common violations recorded on the CIVICUS Monitor since October 2016. 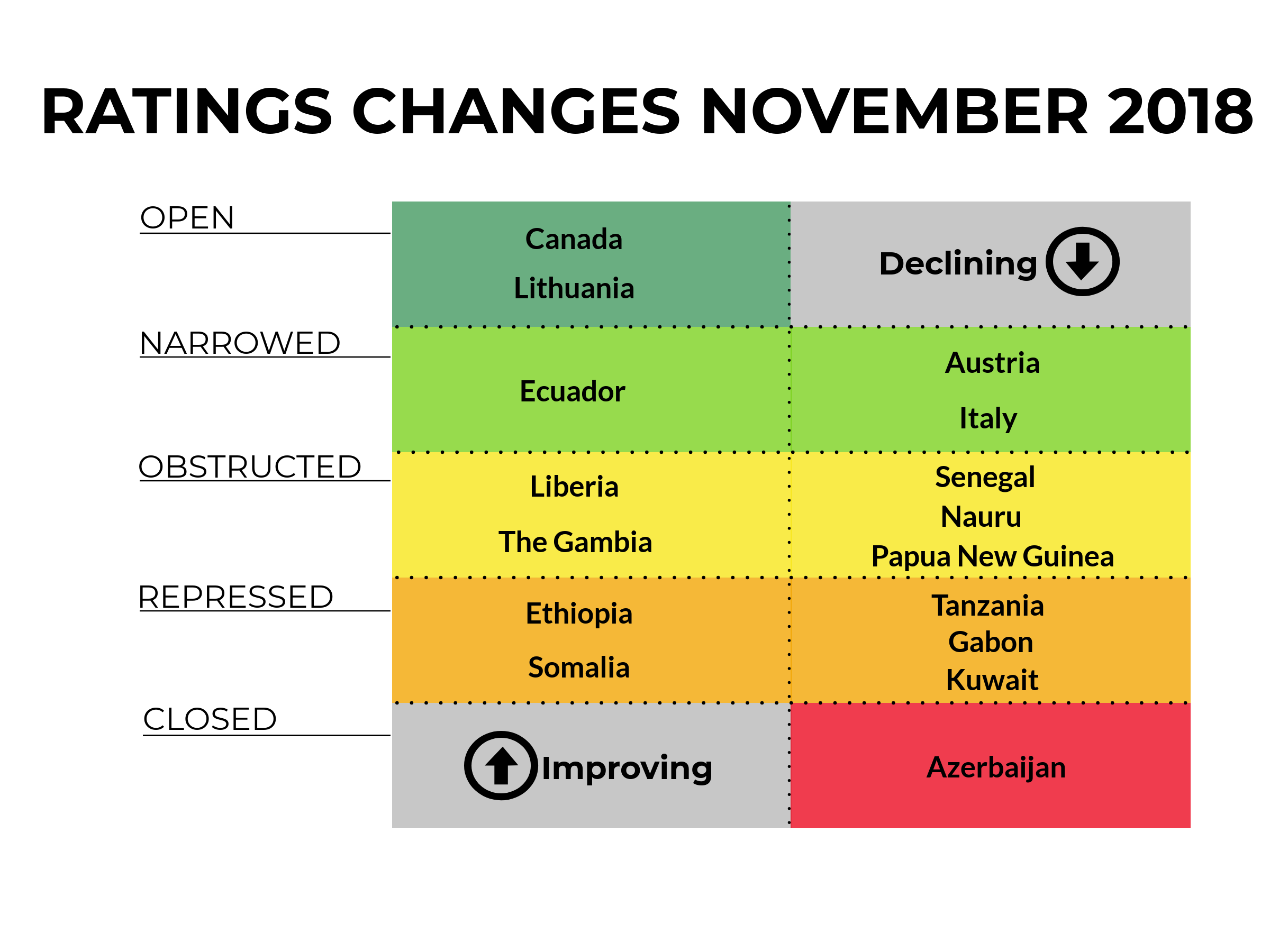 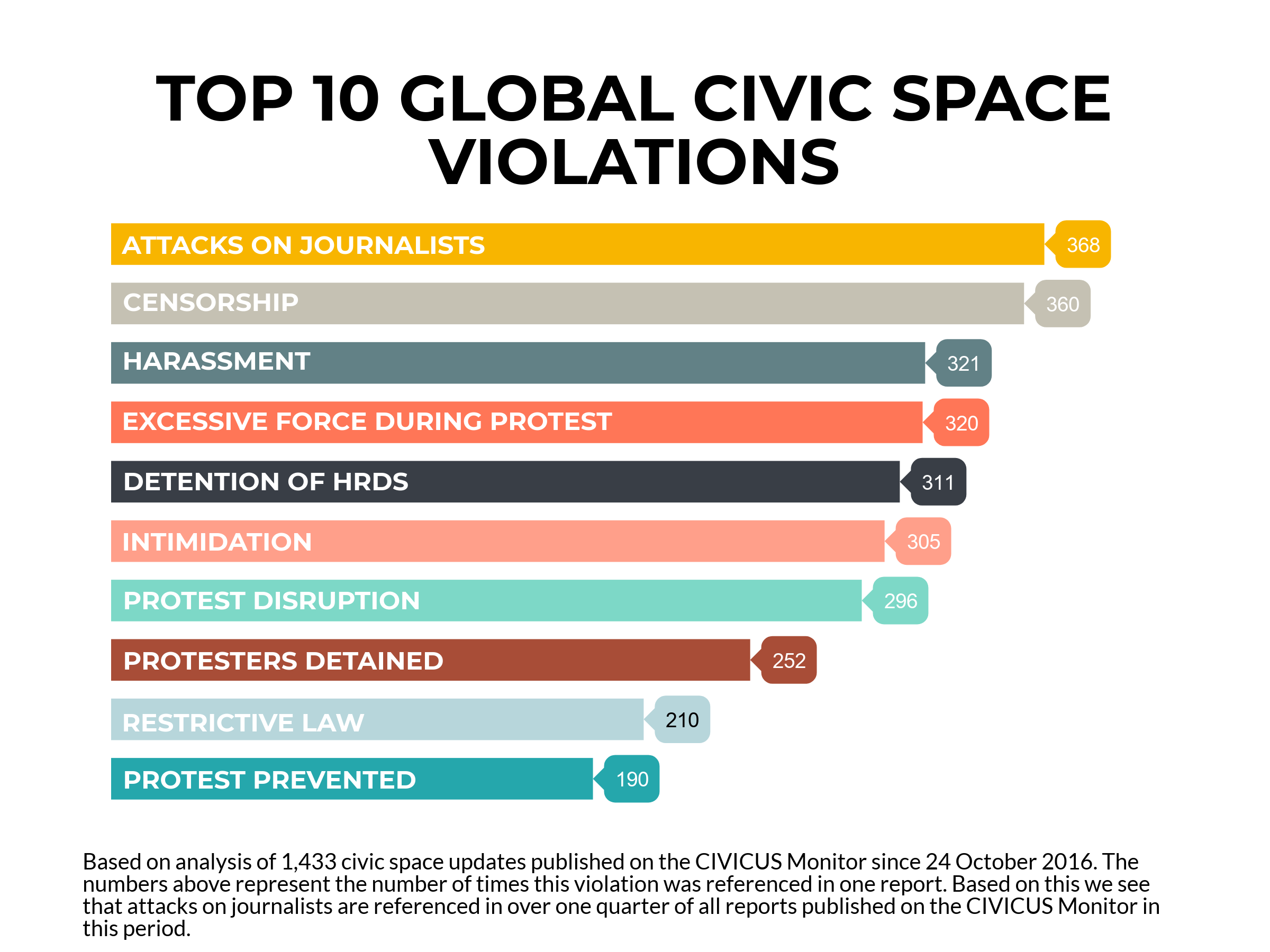 “While there is rightly a lot of concern about the proliferation of bad laws which stifle civic freedoms, our data shows these are just the tip of the iceberg. Extra-legal measures, such as attacking journalists or beating up protestors, are much more common,” said Gilbert. “These tactics are cynically designed to create a chilling effect and deter others from speaking out or becoming active citizens.”

CIVICUS data released today also contains good news stories. In the seven countries which improved their civic space ratings, and elsewhere, we see clear evidence that peaceful activism can force repressive governments to take a different path. In Ethiopia, for instance, following years of popular unrest and the severe repression of all forms of dissent, 2018 has witnessed a remarkable about-turn. New prime minister Abiy Ahmed has released political prisoners, eased restrictions on electronic communication and made important progress towards reforming some the country's most repressive laws. Changes in political leadership in Gambia and Ecuador have similarly led to an improved environment for the exercise of fundamental freedoms.

“Recent improvements in Ethiopia show what is possible when political will is present and leaders take courageous decisions to respond to the calls of civil society,” said Gilbert. “This should encourage those seeking change in repressive countries everywhere. By removing restrictions and protecting civic space, countries can tap into civil society’s true potential and accelerate progress on a wide range of fronts.”

Over twenty organisations collaborate on the CIVICUS Monitor to provide an evidence base for action to improve civic space on all continents. The Monitor has published more than 1,400 civic space updates in the last two years, data which is analysed in People Power Under Attack 2018. Civic space in 196 countries is categorised as either closed, repressed, obstructed, narrowed or open, based on a methodology which combines several sources of data on the freedoms of association, peaceful assembly and expression.

UK Member of Parliament, Jacob Rees-Mogg’s belittling of the CIVICUS Monitor's Watchlist is...