Myanmar authorities must immediately drop defamation charges against three Kachin activists who led a peaceful rally in Myitkyina, the capital of Kachin State. The march was to call for humanitarian access to thousands of displaced civilians and for an end to the armed conflicts in northern Myanmar.

The prosecution of the activists – and other recent cases of politically motivated arrest and imprisonment – represent an alarming return to practices that characterized Myanmar’s decades of direct military rule. 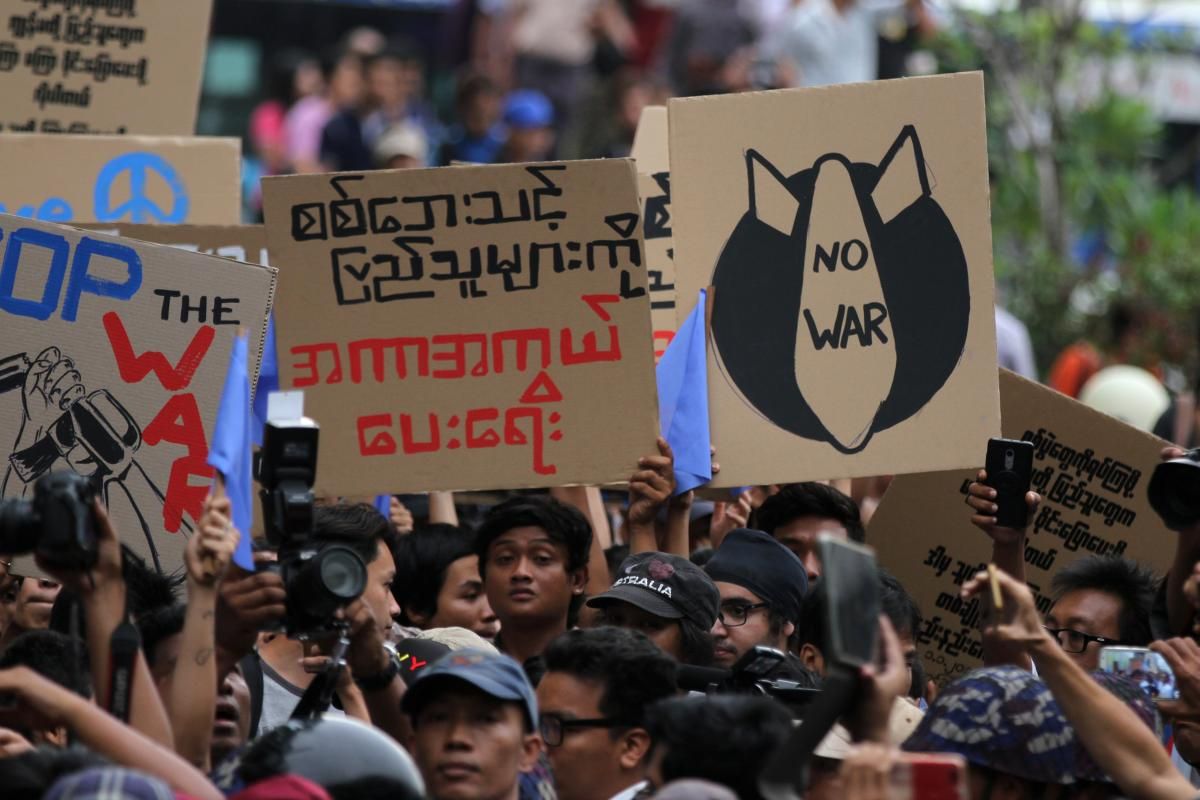 On 3 September 2018, Lum Zawng (m), Nang Pu (f), and Zau Jet (m) were charged under Section 500 of the Penal Code with defamation of the Myanmar military. The charges relate to statements they made at a peaceful rally on 30 April 2018 and at a press conference the next day, following major escalation in fighting between the Myanmar military and the Kachin Independence Army (KIA), an ethnic armed organization in Kachin State. The violence displaced more than 5,000 civilians, 2,000 of whom were trapped for several weeks in a forest near the village of Aung Lawt without access to humanitarian assistance or safe passage from the area.

In response, on 30 April, thousands of people gathered peacefully in Myitkyina to demand the rescue of trapped civilians, the resumption of humanitarian access and an end to the conflict. Lawyer Lum Zawng was one of the organizers of the rally where protesters called for the military to stop aerial attacks on civilians. The authorities have charged him with defamation.

The other two activists, Nang Pu, Director of the Htoi Gender and Development Foundation, and Zau Jet, Chairman of the Kachin National Social Development Foundation, are also facing defamation charges for comments they made at a press conference after the rally. The two had spoken about the situation of displaced civilians in the Hpakant area and about reports of threats against and ill-treatment of civilians by Myanmar soldiers. If convicted, they each face up to two years in prison.

The prosecution of Lum Zawng, Nang Pu and Zau Jet is clearly an attempt by the Myanmar authorities to intimidate, harass and silence community leaders and human rights defenders who speak out about military abuses and the impact on civilian populations. Amnesty International and global civil society alliance, CIVICUS call on the Myanmar authorities to immediately drop the charges against the three activists.

Amnesty International and CIVICUS are concerned about a range of laws in Myanmar – including Section 500 of the Penal Code – which are incompatible with the rights to freedom of expression and peaceful assembly and which are used to arrest, prosecute and imprison human rights defenders and other peaceful activists. Both organizations urge the Myanmar authorities – in particular Parliament – to take immediate action to review and repeal or else amend all such laws to bring them into line with international human rights law and standards.

Human rights defenders play a vital role in the protection and promotion of human rights, and it is crucial that they are able to speak out freely on human rights violations, including those committed by the military against civilians in areas of armed conflict, without fear of repercussions. Under Article 2 of the UN Declaration on Human Rights Defenders, each state has a duty to create the conditions necessary to defend human rights within their jurisdictions. Amnesty International and CIVICUS call on the government of Myanmar to ensure an environment in which it is possible to defend human rights without fear of reprisal or intimidation.

Background
The armed conflict between the Myanmar military and the Kachin Independence Army (KIA) has been ongoing since June 2011, after a 17-year ceasefire ended. Since the resumption of hostilities, fighting has spread to other parts of northern Myanmar, involving a myriad of armed groups.

The Myanmar military has committed war crimes and other gross human rights violations against civilians, particularly from ethnic minorities, as documented in detail by Amnesty International in a June 2017 report and by the UN Fact-Finding Mission in a report presented to the Human Rights Council in September 2018. These crimes and violations include unlawful killings, enforced disappearances, torture, arbitrary arrest and indiscriminate shelling of civilian areas. Ethnic armed groups have also committed abuses against civilians. Investigations into allegations of human rights violations and crimes under international law are rare and perpetrators seldom, if ever, held to account, contributing to a climate of impunity in the country.

More than 100,000 people have been internally displaced across the conflict-affected areas of northern Myanmar since 2011, many of them displaced multiple times. The humanitarian situation of internally displaced people (IDPs) remains serious, with ongoing concerns about conditions in IDP camps, including access to food, shelter, clean water and sanitation. In addition, the authorities – both civilian and military – have imposed severe restrictions on humanitarian access, exacerbating the needs of the displaced population.

Re: UN agencies, funds, programmes and other entities engagement with the military junta UN...