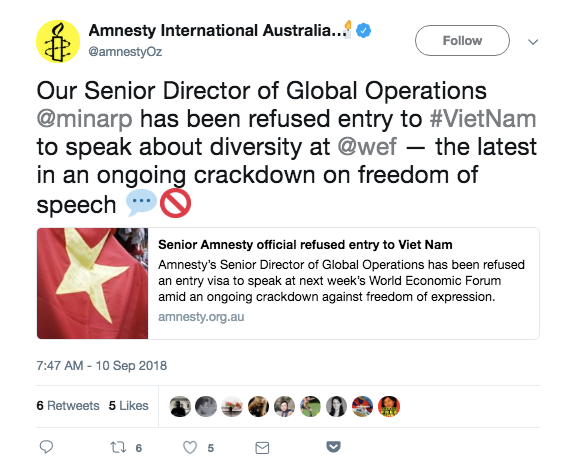 Global human rights groups have condemned Vietnam’s arbitrary detention and deportation of a Malaysian human rights leader who had arrived in the country to attend a regional World Economic Forum (WEF) summit.

Debbie Stothard, Secretary-General of the International Federation of Human Rights (FIDH), had arrived in Vietnam on September 9 and was detained overnight at the Hanoi’s Noi Bai International Airport overnigh before being deported to Malaysia the following morning. Stothard, who had been invited to speak at the forum, was denied entry for “national defense, security or social order and safety” reasons. She also serves as coordinator of the Alternative ASEAN Network on Burma (ALTSEAN-Burma). ASEAN is the Association of South East Asian Nations, a regional political and economic bloc.

“The authorities must allow her to participate in the forum without restrictions or reprisals” said Tiwana.

Fundamental freedoms are severely curtailed in Vietnam, with activists, journalists and bloggers routinely arrested and imprisoned under vaguely defined national security laws. Activists also face restrictions on their movement and are subject to surveillance, harassment and violent assaults. Media outlets in Viet Nam are heavily censored and peaceful protesters have faced arbitrary arrests and excessive use of force by the police.

In April 2018, three United Nations experts urged Vietnamese authorities “not to crack down on civil society to muzzle dissenting voices and stifle the people’s rights to freedom of expression and peaceful assembly and association, in violation of the country’s obligations under international human rights law”.

These restrictions against civil society highlight relentless efforts by the Vietnamese authorities to silence individuals who have critical or dissenting views.

In a tweet after her ordeal, Stothard said “whatever inconvenience I am being subjected to is nothing compared to the attacks on Vietnam #HumanRights defenders & the media”.

CIVICUS calls on the Vietnam government to immediately stop these actions and unconditionally release all human rights defenders imprisoned for exercising their fundamental rights. The authorities must also end all forms of harassment and intimidation against them.