From 3-5 September, the leaders of Brazil, Russia, India, China and South Africa met at the ninth BRICS summit. The venue was Xiamen - a gleaming port city which symbolises China’s rise as the new economic and political force in the world. It is also a fitting venue to mark the continued emergence of BRICS as a bloc with some serious geopolitical heft.

But what does BRICS mean for Chinese people and how can they have any say in these annual meetings, which bring together heads of state from 5 of the most prosperous and populous emerging economies?

These are uncomfortable questions for a group of leaders who, thus far, have not sought any meaningful inputs from their citizens on the future direction of BRICS. They are particularly awkward questions for host, China, where civil society activists, human rights lawyers, and others who seek to have a say in tackling China’s 21st century problems are systematically repressed by a small elite determined to hold on to power.

Regular monitoring of the space for civil society by the CIVICUS Monitor and the China Human Rights Briefing shows the freedoms of association, peaceful assembly and expression are systematically curtailed in China. These research tools show that civic space is ‘repressed’ in China, indicating that citizens are not able to safely and fully exercise their fundamental rights, namely to associate, peacefully assemble and express themselves. Based on these indicators, the state of civil society rights in China is the lowest amongst BRICS countries and in the bottom quarter for all UN member states. 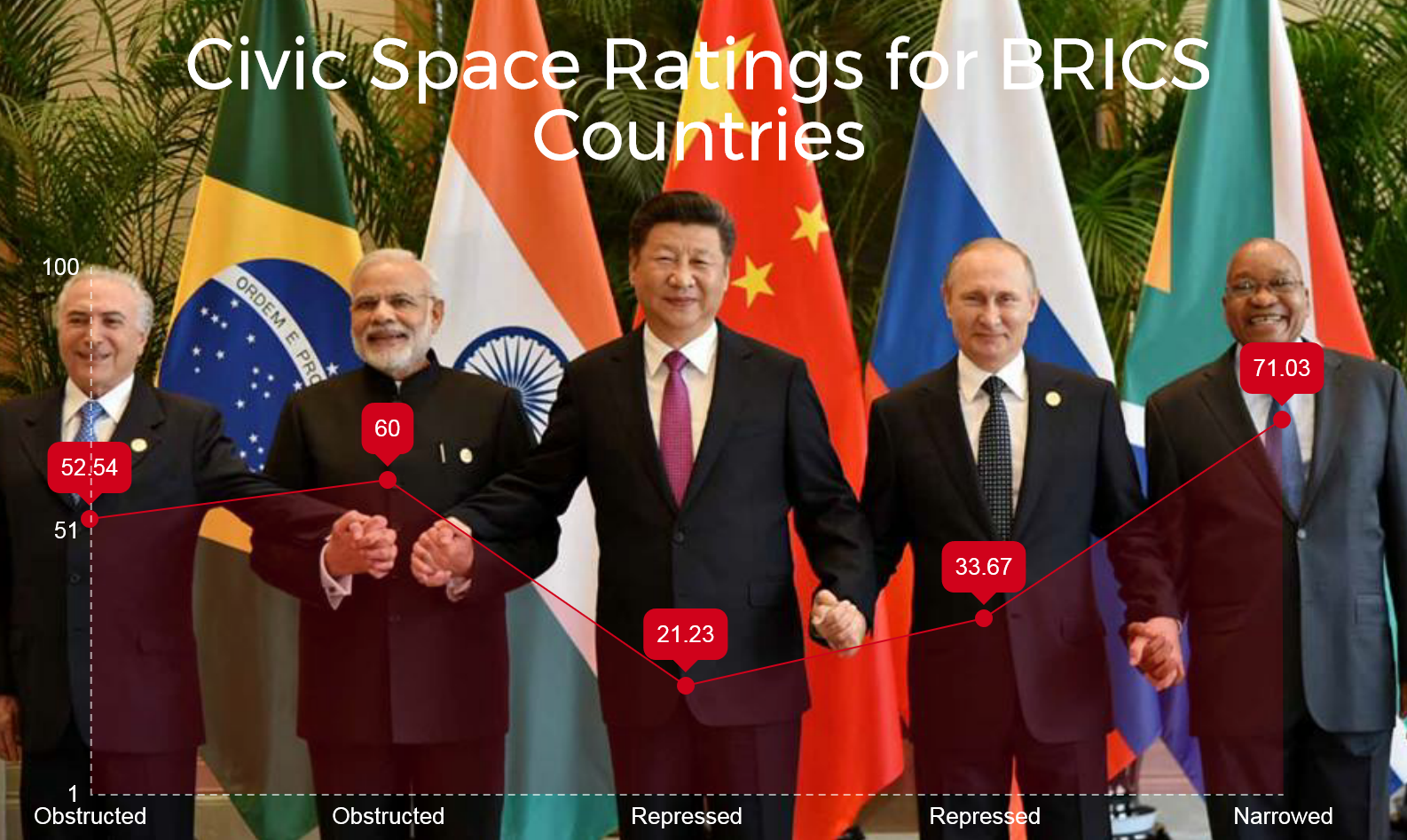 Since 2014, a series of restrictive new laws on national security, non-profit organisations and anti-terrorism have been passed, coinciding with a sustained escalation of detentions of dissidents. The latest of these is China’s new National Intelligence Law, which gives authorities “sweeping powers to monitor and investigate foreign and domestic individuals and institutions”. The Law on the Management of Overseas NGO Activities, which allows the police to control CSOs' funding sources, staffing and activities, came into force on the 1st of January this year.

Aside from laws, China has relentlessly pursued its critics through mass arrests of lawyers and activists in 2015, the shutdown of websites promoting peaceful dialogue and deploying riot police to prevent a demonstration on poor air quality in Chengdu. The list goes on.

The Chinese authorities’ distaste for free speech and human rights activism was perhaps best displayed following the death in July 2017 of China’s only Nobel Peace Prize Laureate  Liu Xiaobo. Rather than allow Xiaobo’s colleagues and friends to mourn, the authorities tightly controlled his burial at sea to prevent a commemoration, arrested activists after his funeral and orchestrated the subsequent disappearance of his widow, Liu Xia, whom they have held in arbitrary detention since 2010.

None of these issues were discussed at the summit in Xiamen. The agenda was dominated by concerns of international security, especially as North Korea tested a hydrogen bomb on the first day of the summit, global trade and the rebalancing of the global financial systems.

But if any of this is to be achieved, and particularly if BRICS is to realise its goal of “strong, sustainable, balanced and inclusive economic growth”, its leaders will have to start listening to their people. Fans of China’s spectacular economic growth may say that political reform  is not necessary but history shows us that silencing your citizens is always a strategy with a limited shelf life. Either education and prosperity will rise to levels where citizens demand a proper say, or exclusion and frustration will spill over onto the streets.

China’s leaders are smart enough to know that even their industrial-scale repression is only partly successful. Indeed, China does allow for tens of thousands of protests to take place across the country every year. By adopting this pressure valve strategy, China allows citizens to let off steam while it simultaneously goes after the organisers or those who share information. This month’s sentencing of a citizen journalist to four years in prison for documenting labour protests is one such example of this tactic.

Deep down, China’s leaders know that a state can never completely kill the spirit of activism and resistance. Nowadays, the rising influence of the internet, despite being  a tool of repression and rigidly controlled and monitored in China, continues to make the spread of ideas and calls to action easier.

BRICS may seem a strange place for China to begin the journey towards a more open society. But within the BRICS framework, China can learn from South Africa, where one of the world’s most progressive constitutions is still largely intact, there is a pluralism in the media and protests take place on a daily basis. This dialogue about the merits of democracy could take place through a genuine South-South spirit of partnership, devoid of the often toxic dynamics of North-South dialogue.

An empowered and engaged civil society doesn’t just mean there will be greater checks on power. It is also a means to create innovation, social cohesion and prosperity within society, share new ideas, challenge the status quo and explore the wealth of generosity and creativity in each individual.

Frances Eve is a Hong Kong-based researcher with the Network of Chinese Human Rights Defenders (CHRD), a coalition of Chinese and international NGOs dedicated to the promotion of human rights in China.

Cathal Gilbert is a researcher at The World Alliance for Citizen Participation, CIVICUS

The joint European Union (EU)-India press release, which provides a summary of the topics...

CIVICUS has submitted a report to the UN Human Rights Committee on the state of civic space in...