Both protests & restrictions surge during the pandemic

Media Releases 08 September 2021
The CIVICUS Monitor has produced a fourth installment of research on the state of civil liberties during the COVID-19 pandemic. The latest research brief provides a snapshot of trends and case studies related to the right to freedom of peaceful assembly.

Despite bans & restrictions on freedom of peaceful assembly, protests have been staged in all regions of the world. 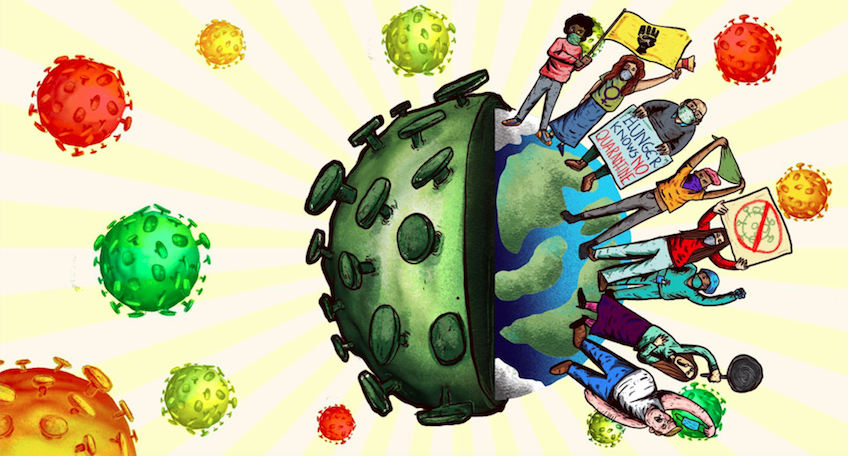 In the early days of the pandemic, restrictions on public gatherings temporarily brought many mass protests movements to a halt. However, people quickly returned to the streets and for a wide range of causes. A new research brief released today by the CIVICUS Monitor documents where protests took place during the first year of the pandemic, the drivers of those protests, and how governments responded to mass mobilisations.

Protests over state responses to the pandemic and economic hardships have been recorded across the world. Data compiled by the CIVICUS Monitor finds that covid-related protests were staged in at least 86 countries from February 2020 to January 2021. Other protests were also staged including on racial justice, women’s rights, and anti-corruption.

Anti confinement measures have been the biggest driver of covid-related demonstrations. From Argentina to Iraq, people have protested against lockdowns and its impact on livelihoods. In over a quarter of the world’s countries, these protests have often highlighted stark inequalities and called on governments to ease the economic burdens of confinement. In some instances, people have also protested against COVID-19 measures, such as mask-wearing and social distancing, including in Australia, Germany, and the USA.

In addition, and at the heart of the CIVICUS Monitor’s research mandate, the brief also documents where there have been violations on the right to peaceful assembly. Protesters have been detained in at least 100 countries, on the grounds of failure to adhere to COVID-19 measures or other laws related to peaceful assemblies. Although restrictions on protests can take on many forms, some of the most troubling responses by authorities and security forces have been the prevalent use of excessive force to disperse protests. This has included lethal force, leading to the killing of protesters in at least 28 countries.

“The COVID-19 crisis should not be used as a pretext to suppress the right to peaceful assembly. The use of excessive force by the authorities to disperse protests is contrary to international law, even during a state of emergency,” said Marianna Belalba Barreto, CIVICUS Monitor Lead.

The UN Special Rapporteur on the right to peaceful assembly and association has stated that laws limiting public gatherings must be necessary and proportionate in light of the circumstances. The UN expert has raised concerns that In many cases, it appears the measures adopted are geared more at cementing control and cracking down on oppositional figures than at ensuring public health.

As both authoritarian governments and mature democracies have responded to the pandemic with repressive measures, the research brief closes with recommendations on how governments can respond to health crises while maintaining respect for peaceful assembly and other civil liberties.

For more details, or to arrange an interview, please contact: media [@] civicus.org