Malaysia: New report on the state of fundamental freedoms under the Perikatan Nasional government

Joint research report on the state of civic freedoms in Malaysia

The Perikatan Nasional government has undermined and obstructed the exercise of fundamental freedoms during its first twelve months in power, said ARTICLE 19 and CIVICUS in a new report published today. The government has not only failed to reform or repeal laws that restrict the rights to freedom of expression, peaceful assembly, and association but has initiated baseless criminal proceedings against government critics, human rights defenders, journalists, and individuals expressing critical opinions.

The report, “Rights in Reverse: One year under the Perikatan Nasional government in Malaysia”, highlights the Perikatan Nasional government’s record during its first year in power against its obligation to respect, protect, and fulfil the rights to freedom of expression, peaceful assembly, and association. The report highlights the government’s sustained use of repressive laws and provisions to silence dissent amid a global pandemic, when press freedom and civil society is needed more than ever to ensure reliable information and to hold the state accountable. 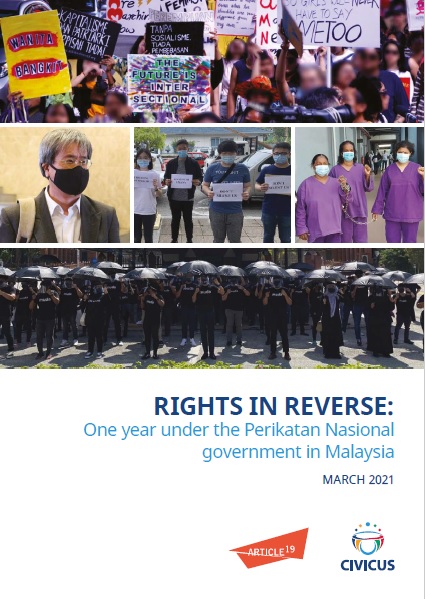 “The Perikatan Nasional government has been extremely secretive about its legislative agenda but has been crystal clear about its intention to continue using repressive laws to target critics and dissenters,” said Nalini Elumalai, ARTICLE 19’s Malaysia Programme Officer. “A healthy environment for public discourse cannot be achieved until dissenting and unpopular opinions are respected and protected instead of silenced.”

Over the past year, authorities have aggressively applied the Sedition Act 1948 and Communications and Multimedia Act 1998 (CMA) to investigate, arrest, charge, and convict individuals who have criticized government officials or Malaysian royalty, or who have shared opinions about sensitive issues such as race and religion. Between March 2020 and February 2021, ARTICLE 19 and CIVICUS recorded 66 cases involving 77 individuals who have been investigated or charged under the two laws because of their exercise of the right to freedom of expression. Over this period, at least 12 people were convicted under the CMA.

Press freedom has also declined sharply during the Perikatan Nasional government’s first year in power. This trend was highlighted by Malaysiakini’s conviction on contempt of court charges in relation to third-party comments made on its website, the unprecedented witch-hunt against Al Jazeera journalists investigating the treatment of migrants workers during the COVID-19 pandemic, and the targeting of journalists reporting on the actions and statements of government officials. The harassment and intimidation of journalists further demonstrates the shrinking space for free and independent media in Malaysia.

The legal framework governing the exercise of freedom of assembly and association remains highly restrictive and excessively burdensome.

The Peaceful Assembly Act falls shorts of international law and standards and denies the right to protest to children and non-citizens. It also fails to allow for spontaneous assemblies. The last year saw peaceful protesters being investigated and arrested, including health workers protesting their lack of access to adequate personal protective equipment during the COVID-19 pandemic.

The Societies Act has continued to stand in the way of enjoyment of the right to freedom of association, which is critical in a democracy. The Registrar of Societies has excessive powers and has erected barriers to registration for new opposition political parties such as Muda and Pejuang and civil society groups while simultaneously fast-tracking the registration of the Perikatan Nasional.

“The Perikatan government has attempted to silence peaceful protesters and impede the formation of political parties to keep itself in power,” said Josef Benedict, CIVICUS Researcher. “Its attempt to join the Human Rights Council cannot be taken seriously unless it takes immediate steps to remove undue restrictions on assembly and association,” Benedict added.

ARTICLE 19 and CIVICUS urge the Malaysian government to undertake a comprehensive and inclusive process of legislative and institutional reform in order to promote and protect fundamental rights and freedoms. To this end, authorities must ensure that all processes are fully transparent and facilitate full and effective participation of all concerned stakeholders, including civil society.

Malaysia’s reform process must be informed by relevant international human rights standards. The Perikatan National government should take concrete steps towards the ratification of core human rights treaties, including the International Covenant on Civil and Political Rights.

The space for civil society in Malaysia is rated as ‘Obstructed’ by the CIVICUS Monitor, an online platform that tracks civic space in every country. An Obstructed rating for civic space means that democratic freedoms – such as the freedoms of expression, peaceful assembly and association – face a combination of legal and practical constraints in Malaysia.

CIVICUS speaks with Keren Adams, Legal Director of the Human Rights Law Centre (HRLC), about the...