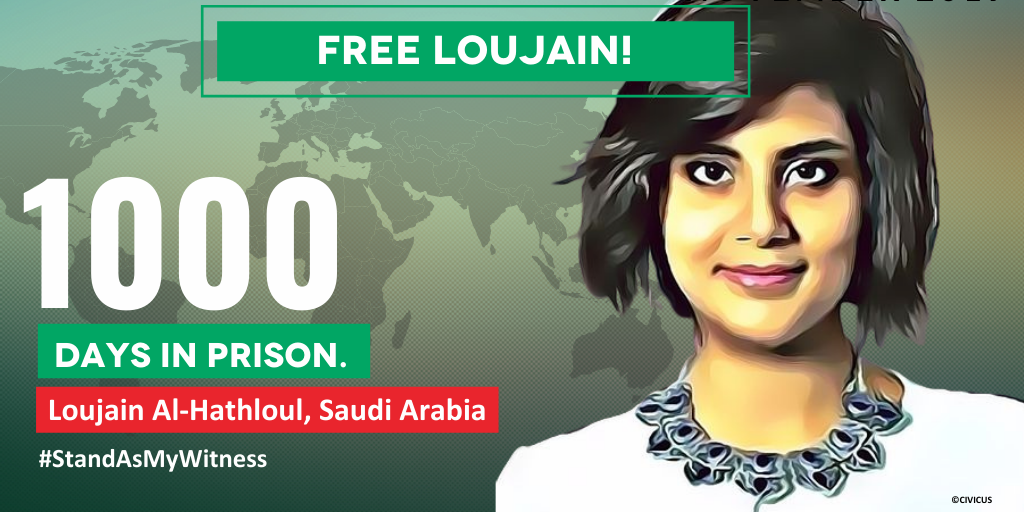 Loujain and other activists were imprisoned on 15 May 2018 after defying the Saudi government’s ban on women driving and calling for an end to the patriarchal male guardianship system. They were charged with “attempting to destabilise the kingdom” and continued to be detained after women in Saudi Arabia were granted the right to drive.

“Loujain has become a symbol of the repression and silencing that women in Saudi Arabia face when they dare to speak out for their human rights. In her 1000 days in prison, Loujain has been denied justice for the brutal torture she endured, sentencced to nearly six years in prison and is now fighting for her unconditional freedom. The international community must unite and continue to call for Loujain’s immediate and unconditional release,” said Uma Mishra-Newbery, campaign manager for #FreeLoujain.

Loujain has been subjected to multiple human rights violations under Saudi authority, including severe torture such as electric shocks, flogging and sexual assault. In October 2020 she began a hunger strike to protest the conditions of her detention after being denied regular access to her family. This prompted a UN women’s rights committee to issue a statement saying it was, "gravely concerned about Ms Hathloul's physical and mental health and well-being."

After more than two years in detention, on 28 December 2020 Loujain was sentenced to five years and eight months in prison by the Specialized Criminal Court. The deeply flawed and unfair trial has been criticised by human rights organisations globally and Loujain, a human rights defender and prisoner of conscience, has appealed the sentence.

“The Saudi Arabian authorities must immediately and unconditionally release Loujain al-Hathloul and make sure her conviction is quashed. Repression and subjugation of women in Saudi Arabia under its patriarchal regime is well-known across the world.  Despite a massive public outcry from the United Nations and members of the Human Rights Council, Loujain and fellow activists have been behind bars for nearly three years, just for standing up for women’s rights,” said Masana Ndinga-Kanga, CIVICUS Advocacy Lead for the Middle East.

CIVICUS has learned that on Thursday 11 February 2021 Saudi activist Loujain al-Hathloul will be released from prison after 1004 days.

However, due to the conditions of Loujain’s sentence, it is likely she will be placed under heavy restrictions. While we welcome Loujain’s release, we urge the Saudi authorities to drop all charges and travel bans against her.

Civic space in Saudi Arabia is rated as closed by the CIVICUS Monitor, see country page.