Burundi: four journalists still in jail one year after they were arrested

Exactly one year to this day 4 journalists from the IWACU news agency were arrested and later convicted after a flawed judicial process. CIVICUS stands in solidarity with the #IWACU4 & reiterates our call for them to be released immediately https://t.co/jdoBlrFFp3 @BHRI_IDHB pic.twitter.com/Mxuy88UasD

One year to the day four journalists in Burundi were arrested for reporting on a story about clashes between the security forces and a rebel group, global civil society alliance CIVICUS calls on the authorities in Burundi to free the journalists and drop all charges against them.

Christine Kamikazi, Agnès Ndirubusa, Egide Harerimana, and Térence Mpozenzi of the IWACU news agency were arrested together with their driver Aldophe Masabarakiza on 22 October 2019. They were arrested as they covered clashes between the Burundian army and the RED-Tabara rebel group in the Bubanza province. It was reported at the time that the rebels had crossed the border from the Democratic Republic of Congo into Burundi.

The journalists were initially charged with “complicity in threatening the security of the state,” but were eventually convicted of a lesser charge of “attempting to commit a crime.” The judicial process was marked by inconsistencies and no tangible evidence was presented against them. Only the driver was acquitted. The IWACU press group appealed the sentence through their lawyers in February 2020 but Ntahangwa High Appeals Court rejected the appeal in June. 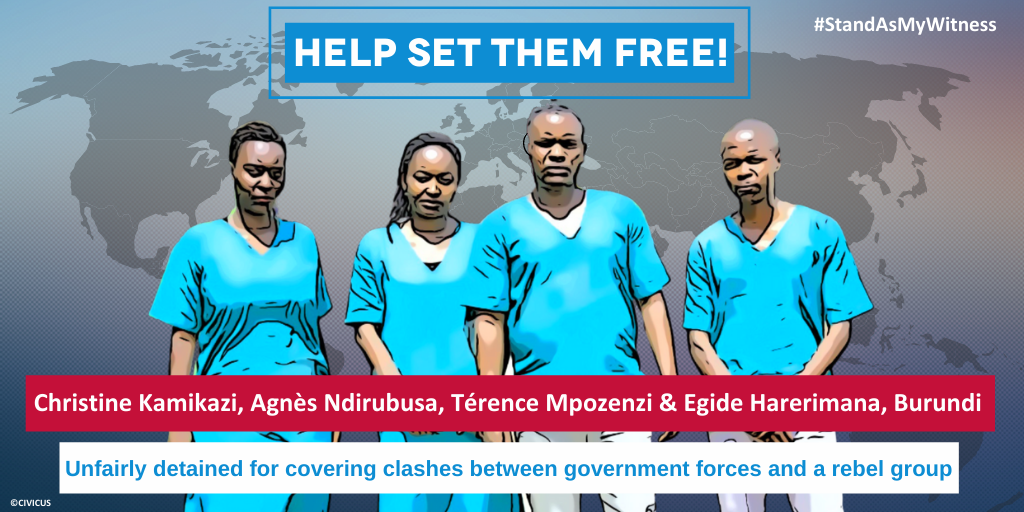 “It is absurd that the four IWACU journalists are still being held, one year after they were arrested. The journalists were simply doing their job and peacefully reporting on an issue of national significance – they should never have been charged in the first place. The government of President Évariste Ndayishimiye should demonstrate a willingness to move away from the human rights violations of the previous regime by calling for the immediate release of these journalists,” said Paul Mulindwa, CIVICUS Advocacy and Campaigns Officer.

IWACU is one of Burundi’s last remaining independent media outlets and has been operating legally for twelve years, in accordance with national rules and guidelines on professional and journalistic ethics. The judicial persecution and detention of the four journalists reflects the dwindling state of media freedoms and civic rights in Burundi.

To mark the anniversary of their one-year detention, the journalists have been added to CIVICUS’s #StandAsMyWitness campaign, which highlights the persecution and detention of human rights defenders around the world and calls for their release. We stand in solidarity with the four IWACU journalists and call on President Évariste Ndayishimiye to release them immediately.

Burundi is rated ‘closed’ by the CIVICUS Monitor.

CIVICUS calls on the Democratic Republic of the Congo (DRC) authorities to immediately release...