The Indian government is using a variety of restrictive laws - including national security and counter-terrorism legislation - to arrest and imprison human rights defenders, peaceful protesters and critics, the global civil society alliance CIVICUS said today in a new report. 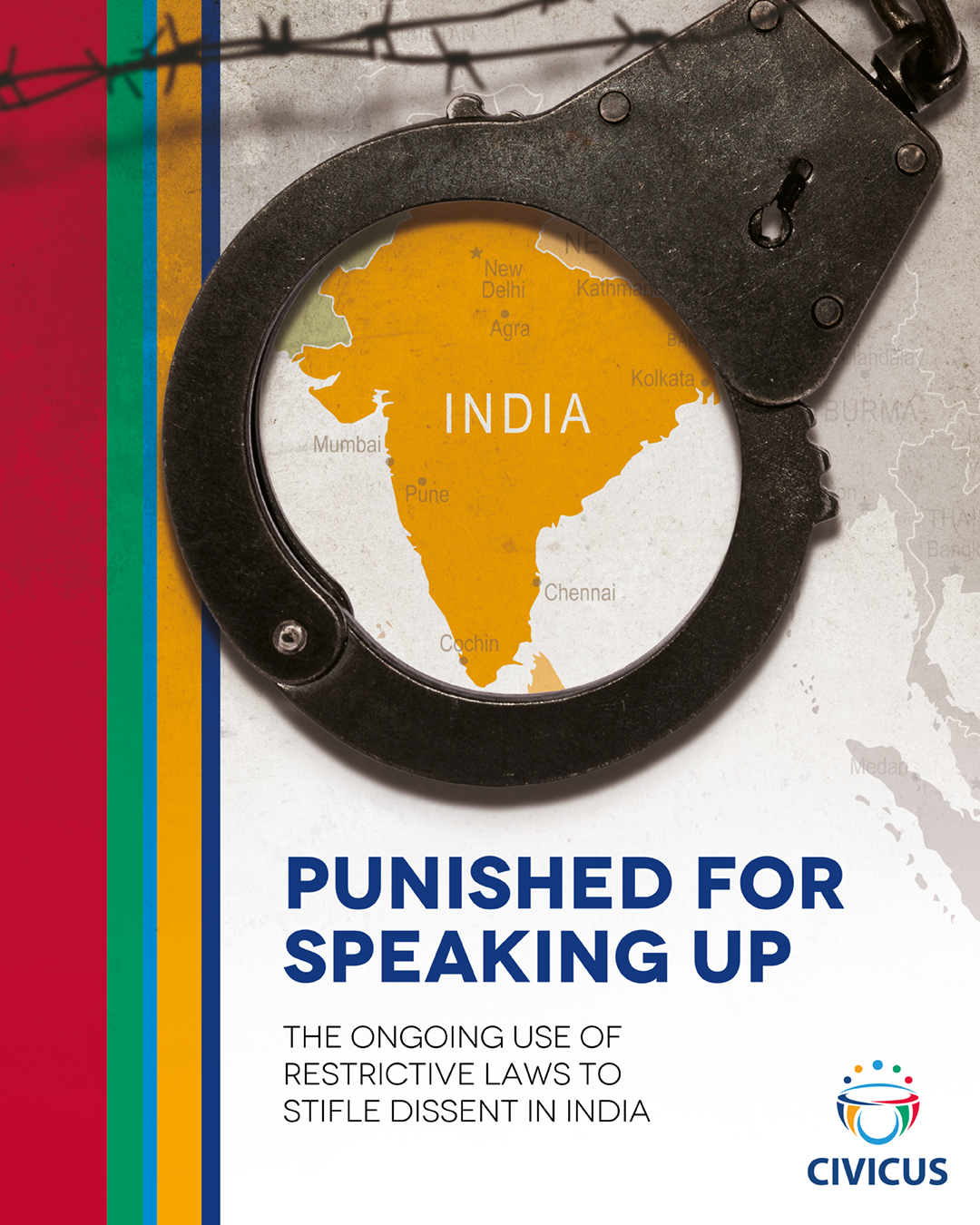 More than a year into  Prime Minister Narendra Modi’s second term in office, the CIVICUS report, “Punished for speaking up: The ongoing use of restrictive laws to silence dissent in India,” shows an increasingly repressive environment for civic freedoms, such as the freedoms of expression, association and assembly.  The report highlights the arrest, detention and prosecution of activists, the targeting of journalists, and the unprecedented and brutal crackdown on protests against the discriminatory Citizenship (Amendment) Act. CIVICUS is also concerned about increasing violations in Indian-administered Jammu Kashmir.

Further, India’s slide towards authoritarianism has led to the conflation of dissent with anti-nationalism, often with disastrous results for human rights defenders and activists who have been subjected to damaging smear campaigns.

The activists profiled in the report represent a small fraction of the arbitrary arrests, prosecutions and imprisonments taking place across India, providing a snapshot of the challenges facing the country’s human rights defenders.

The report also highlights a series of vaguely worded and overly broad laws being used by the Indian authorities to deprive activists of bail and keep them in ongoing detention. These include the Unlawful Activities (Prevention) Act, (UAPA), which is India’s primary counter-terrorism law; section 124A on ‘sedition’ of the Indian Penal Code, a colonial-era relic; and administrative detention laws such as the National Security Act (NSA) and the Public Safety Act (PSA), which applies only in Indian-administered Jammu and Kashmir

“The laws are incompatible with India’s international human rights obligations as well as India’s Constitution. Not only are the laws themselves inherently flawed, but their implementation makes it clear that they have become tools for judicial harassment, rather than for preventing or addressing criminality.”

During the COVID-19 pandemic, the Modi government has continued to use state resources to sustain its persecution of human rights defenders and critics, many of whom have underlying medical conditions or are at risk of contracting COVID-19 in overcrowded and unsanitary prisons. CIVICUS is also concerned about the judicial harassment of individuals and journalists who criticise the authorities’ handling of the pandemic.

“It is appalling that human rights defenders are locked up in overcrowded prisons and continuously denied bail despite calls by the UN to decongest prisons and release political prisoners during the pandemic. Holding them at this time puts them at serious risk of contracting COVID-19 and adds another layer of punishment for these activists, who have been detained just for speaking up for human rights,” said Benedict.

“As India’s political and economic influence increases, developments in the country are being closely followed by the global community. India’s quest to play a critical role on the international stage would be better served by committing to upholding democratic values and recognising the validity of people’s struggles,” said Benedict.

In the report, CIVICUS makes a number of recommendations to the Indian authorities, including:

The space for civil society in India was downgraded in December 2019 from ‘obstructed’ to ‘repressed’ by the CIVICUS Monitor, an online platform that tracks civic space in every country. A repressed rating for civic space means that democratic freedoms – such as the freedoms of expression, peaceful assembly and association – are significantly constrained in India.

Seven human rights organisations expressed concerns about the deteriorating health of the activist...