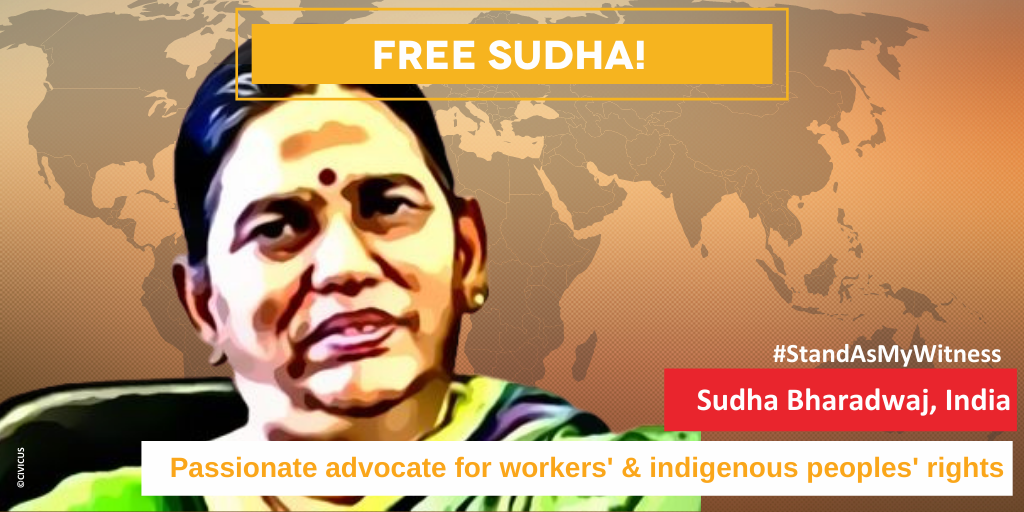 August 28 2020 marks two years since the arrest and detention of Indian activist and human rights lawyer Sudha Bharadwaj. Ahead of this second anniversary, global civil society organisation CIVICUS calls on the Indian government to immediately release Bharadwaj and drop all charges against her.

Bharadwaj has been in pre-trial detention since August 2018, when she was arrested under the draconian Unlawful Activities Prevention Act (UAPA) and accused of having links with Maoist terrorist organisations. It is also alleged that she and ten other human rights defenders were conspiring to incite Dalits, a marginalised group, at a public meeting which led to violence in Bhima Koregaon village in the Pune district of Maharashtra in January 2018.

Sudha Bharadwaj was initially held under house arrest until October 2018, when she was then moved to Byculla Women’s Prison in Mumbai. There are concerns that the 59 year old, who suffers from diabetes and hypertension, will be susceptible to COVID-19 in the cramped prison, where an inmate has already tested positive for the virus. A July medical report found that she is also now suffering from Ischemic heart disease.

Despite her underlying health issues, last week Bharadwaj’s plea for bail to the Bombay High Court was opposed by the National Investigation Agency which claimed her condition is not serious. The treatment of Bharadwaj highlights the increasingly repressive measures used by Prime Minister Narendra Modi’s government to clamp down on dissent and silence human rights defenders.

UN experts have expressed concerns about the terrorism charges laid against Sudha and about the Unlawful Activities Prevention Act’s vague definition of ‘unlawful activities’ and ‘membership of terrorist organisations’ which have been routinely used by the government to stifle dissent:

“Sudha is a lawyer and activist who has spent her life defending Indigenous people in India and protecting workers’ rights. However, her human rights activities have put her in the firing line of the Modi regime, which is abusing the Unlawful Activities Prevention Act (UAPA) and using it to round-up activists and human rights defenders on trumped-up charges,” said Josef Benedict, Asia-Pacific civic space researcher for CIVICUS.

CIVICUS is a global alliance of civil society organisations dedicated to strengthening citizen action and civil society around the world. CIVICUS has 10,000 members worldwide.

CIVICUS Monitor is an online platform that tracks the fundamental rights of freedom of assembly, association and expression in countries across the world. India’s civic space rating was downgraded from ‘obstructed’ to ‘repressed’ last year owing to its increased restriction of space for dissent and particularly following Prime Minister Narendra Modi’s re-election in May 2019.