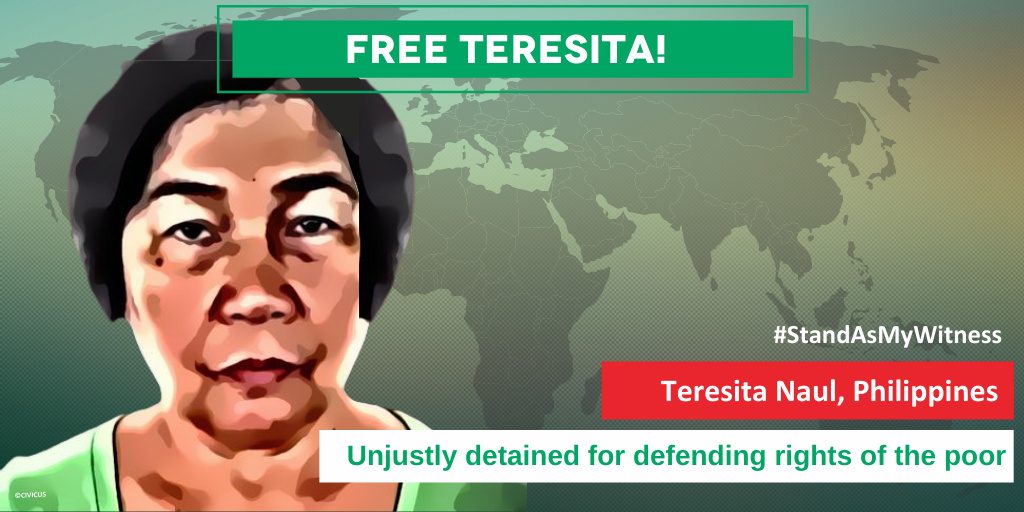 Naul was arrested on 15 March 2020 in Lanao del Sur, on the southern island of Mindanao, by the police and Philippines Army (AFP) on charges of kidnapping, destructive arson and serious illegal detention. Police claim she is a member of the New People’s Army, an armed rebel group responsible for an attack on the military in Agusan del Sur in December 2018.

However, at the time of the incident she was at St Ignatius Hospital in Cagayan de Oro City to undergo a medical examination.  Many of her co-accused are human rights activists, nuns, lawyers and public sector employees.

Naul has dedicated her life to protecting the poorest and the most marginalised. She advocates for their right to health and other basic social services:

“Teresita, a women human rights defender should never have been detained in the first place, and we call for her immediate and unconditional release. Her case highlights the increasing use of trumped up charges to silence those speaking up peacefully to exercise their freedom of expression,” said Josef Benedict, Asia-Pacific civic space researcher for CIVICUS.

Naul, aged 62, suffers from asthma and bronchitis. She is being detained in Agusan del Sur Provincial jail where her health has deteriorated in the overcrowded and unsanitary conditions. Family members and lawyers have been denied access to Naul and say they fear for her life:

“My mother is frail and her health is declining by the day. She has a breathing disorder and is constantly exhausted after being made to clean toilets. Authorities should let her stay at home under house arrest during her trial. Imprisonment is putting her life at risk,” said Ana Naul, daughter of Teresita Naul.

“Nanay Tessie” (“Mother Tessie”), as Naul is commonly known, is one of a group of leading human rights defenders who will feature prominently in a global campaign called #StandAsMyWitness. The campaign will be launched by CIVICUS, Amnesty International, OMCT and FIDH (International Federation for Human Rights) on Nelson Mandela Day, 18 July.

30 years after Mr Mandela was released from prison, human rights activists and prisoners of conscience are still being locked up, persecuted or killed for seeking social, political, economic, gender and environmental justice.

The #StandAsMyWitness campaign urges people to sign a petition calling for an end to the imprisonment and harassment of human rights defenders. People are also encouraged to share the defenders’ individual stories on social media using the hashtag #StandAsMyWitness.

More details about the #StandAsMyWitness campaign can be found online here.

Teresita Naul also features in OMCT’s #FacesOfHope campaign, calling for the release of all human rights defenders arbitrarily detained worldwide, including those in pre-trial detention.

CIVICUS is a global alliance of civil society organisations dedicated to strengthening citizen action and civil society around the world. CIVICUS has 10,000 members worldwide.

CIVICUS Monitor is an online platform that tracks the fundamental rights of freedom of assembly, association and expression in countries across the world. The Philippines’ civic space rating is ‘obstructed’ and it was put on the civic space Watchlist in June 2020.

For interviews with CIVICUS and the family of Teresita Naul, please contact: