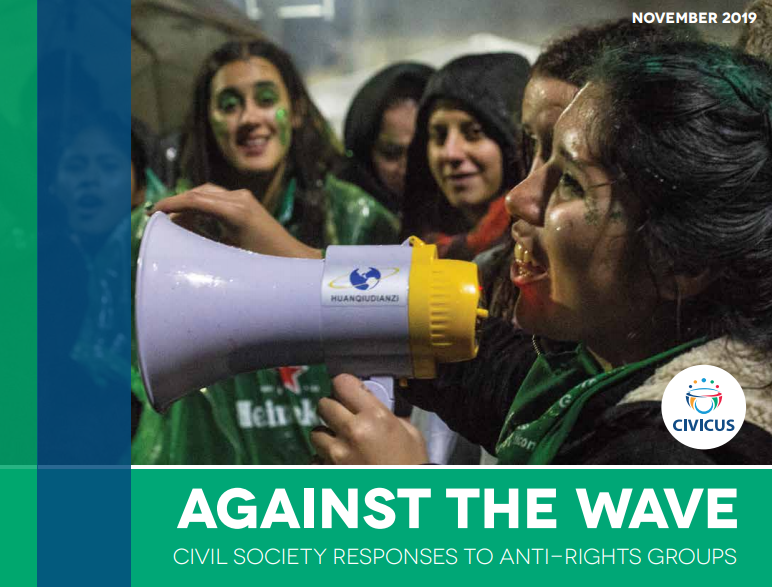 Groups that claim to be part of civil society but attack fundamental freedoms are on the rise globally.

From the United States to India and from Brazil to Italy, these groups are achieving unprecedented levels of influence and impact in their campaigns against the rights of marginalised and minority groups, as well as the civil society organisations (CSOs) defending them.

This was one of the findings of a new report, released today, on a rising tide of ‘anti-rights’ groups worldwide and the efforts of progressive civil society to challenge them.

The report, ‘Action Against the Anti-Rights Wave: Civil Society Responses’ was released by global civil society alliance, CIVICUS. The findings are drawn from a year-long research initiative that included interviews and consultations with over a thousand civil society activists, leaders and organisations in more than 50 countries.

“Anti-rights groups are now a key part of the repression of civil society space – civic space – seen in many countries across the globe,” said Lysa John, CIVICUS Secretary-General.

Excluded groups including women, LGBTQI people and religious, Indigenous and racial minorities are bearing the brunt of these attacks. CSOs that defend their rights are also being targeted.

“This wave of conservative and often extremist organisations that are seeking to roll back fundamental rights comes as part of a backlash to the success that civil society has won in past decades,” said John.

Indeed, researchers noted the steady rise in the prevalence, prominence and power of such groups as the world commemorated the 70th anniversary of the historic signing of the United Nations Universal Declaration of Human Rights last year.

According to the report, civil society has been fighting back - and needs to continue those efforts - by building connections between CSOs working on different issues; bolstering collaboration and solidarity across borders; improving creative communications; reclaiming human rights language and exposing regressive campaigns.

Who Are These ‘Anti-Rights’ Groups?

The organisations behind attacks on excluded groups and human rights are sometimes set up as proxies of state interests and sometimes are genuine non-state groups, but often stand somewhere in between, working hand in hand with powerful political figures and repressive states.

“In some contexts, civil society reports that their main threat comes not from arms of the state but from anti-rights groups,” said Ines Pousadela, one of the report’s co-authors.

“They have been around for a while now but what is new, is that they are growing in strength, confidence, visibility, support, resources and are gaining ground in international spaces as well,” said Pousadela.

These groups are shaping public narratives, including through disinformation and manipulation, and are sowing hatred and division as well as encouraging violence.

Movements attacking fundamental freedoms differ in membership, histories and outlooks but together are part of a growing threat to civil society and share remarkably similar tactics in attacking civil society. Examples cited in the report include ultra-conservative faith groups conspiring to block women’s access to abortion in Argentina, nationalists stoking violence against ethnic and religious minorities in India and neo-fascist activists smearing civil society and the political opposition in Serbia.

“Against a backdrop of the unprecedented rise of right-wing populism and nationalism globally, these groups seem to be reawakening, stretching their wings and becoming more powerful,” said Pousadela.

For more information or to arrange interviews on the report, please contact:

Click here for the full report and its executive summary

CIVICUS is a global alliance of civil society organisations and individuals dedicated to strengthening citizen action and civil society for a more just, inclusive and sustainable world.  The alliance works to protect the fundamental rights that allow us to speak out, organise and take action. We do this by defending civic freedoms and democratic values; strengthening the power of people; and empowering a more accountable, effective and innovative civil society.  We strive to promote excluded voices, especially from the global south, and have a growing alliance of more than ,members in over 175 countries.